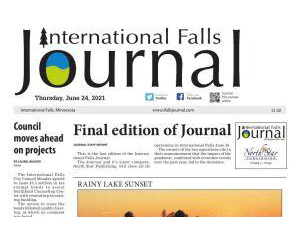 The International Falls Journal newspaper published its final edition today after 110 years of operation in the northern Minnesota town at the Canadian border. The newspaper was founded in 1911 and has served the community ever since. North Star Publishing, an affiliated commercial printing business, is also shuttering.

International Falls is located on the Rainy River. Ontario, Canada, is on the other side of the river. The city had a population of roughly 6,400 residents according to the 2010 census.

In response to an inquiry from Twin Cities Business, Journal publisher Rob Davenport referred back to a brief, three-paragraph item about the closure in its own June 3 edition.

The statement noted, “Like many businesses this past year, the impact of the pandemic on The Journal and North Star Publishing has been dramatic. These challenges, when combined with other difficult economic trends, have forced us to make this difficult decision.”

Since last year the Journal has been owned by New York-based Alden Global Capital, which is now the second-largest owner of U.S. newspapers ranking behind only Virginia-based Gannett Co. Inc. Alden acquired Digital First Media in 2010, bringing the St. Paul Pioneer Press into its fold.

Alden acquired the International Falls Journal in 2020 as part of its acquisition of Minnesota-based Red Wing Publishing Co.

Alden is a hedge fund which has acquired a reputation among journalists as a “vulture capitalist” for ruthlessly slashing jobs almost immediately after acquiring a newspaper.

In recent years, the disappearance and erosion of local news has become an ongoing topic of discussion in both media and political circles.

Sen. Amy Klobuchar commented on the closure of the Journal on Tuesday in the U.S. Senate:

Today, newspapers of all sizes are struggling and closing.

Ad revenue for U.S. newspapers plummeted from $49.4 billion in 2005 to $14.3 billion in 2018. During that time, two other companies, Facebook and Google — worth over $2.4 trillion combined — became advertising titans.

These two companies don’t just control the majority of online advertising; they’ve built power over the news and crushed local news outlets along the way.

With the closure of The Journal, we are once again seeing the impacts of this firsthand. We can’t stand by and watch this happen to our independent press. That’s why I have introduced bipartisan legislation to let news publishers join together to negotiate fair terms with these giant digital corporations. We must give independent papers the chance to compete.

But even as we work to ensure other papers are able to keep their lights on, the International Falls Journal is a reminder of the value of local journalism. For more than a century, it has empowered its readers by providing them with accurate, relevant information about their communities. It has captured moments big and small that together tell a beautiful story of the region that will live on.

Newspapers were something a family business for Klobuchar. Her late father, Jim, was a columnist for many years for the Star Tribune. 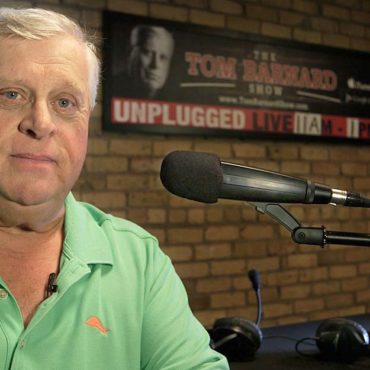