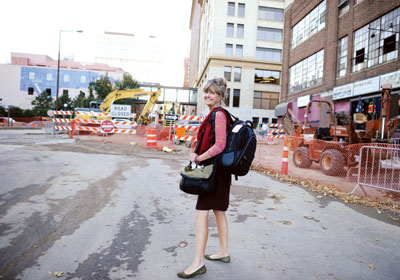 Interconnecting with the World

Round Earth Media is broadcasting next-generation journalism in part through next-gen media.
December 11, 2010

Mary Stucky has developed a global vision. A veteran broadcast journalist whose stories have appeared on KARE-11 locally and on public radio and television both locally and nationally, she founded a nonprofit entity in 2005 called Round Earth Media to cover stories that she says have been “ignored in the 24/7 news cycle.” Through radio and online photographic journalism, Round Earth focuses on parts of the world that have been getting less and less attention in the mainstream U.S. media in recent years—in particular, developing countries in Asia and in Central and South America.

Since its founding, Round Earth has produced dozens of sound and video stories per year for outlets including Public Radio International and Frontline World. One of Stucky’s favorites: Nicaragua’s successful efforts to persuade rival youth gangs to coexist peacefully, a story broadcast two years ago on the radio program World Vision Report.

As a start-up, Round Earth was funded primarily by donations from individuals and foundations, particularly the Michigan-based W. K. Kellogg Foundation. “We were ticking right along,” Stucky recalls. But two years ago, with the onslaught of recession, donations began to dry up. “We realized what we really needed to do was figure out how to sustain this thing,” she says. “What is a sustainable financial model for journalism?”

In October, Stucky and Round Earth unveiled a new hybrid model. One part is a nonprofit newsgathering organization, which Stucky runs. The other is a for-profit entity that uses the brand Roundearthmedia.com. The for-profit’s CEO is Tim Morin, a former journalist with experience in sales, marketing, tech, and start-ups who was previously executive vice president of marketing and business development for Four51, a Bloomington-based e-commerce software firm. The for-profit is investor backed, with no ownership by the nonprofit.

“The business model is combining global high-quality, vetted journalism, in a partnership between veterans and ‘next-gens’ with social media distribution,” Stucky says.

One of Morin’s top assignments: wring revenues from distribution. “The good news is the journalism pipeline is full and has been producing great reporting for a number of years,” he says. “Now what we’ve got to do is package it and ‘socialize’ it.”

For one thing, that means using Facebook and other social media as broadcast outlets.

Morin notes that Facebook “is 500-plus million people right now. By the end of 2011, it will be a billion people. Our view is, why not take this important global journalism and sync it up with where people are?” By using Facebook, he adds, “We’ll be able to understand the specific audience that’s consuming. The information we can learn about our audience, we believe, is going to be valuable to marketing partners, sponsors, and advertisers—much like traditional media.”

In the coming months, Roundearthmedia.com will deploy proprietary technology to measure and understand its viewers and listeners on Facebook and its Web site, in part to lure advertisers and sponsors. It could also help attract sponsors for broadcasts. Morin believes Round Earth will prove to have “a very attractive audience”—young, plugged in, and connected.

The newly configured Round Earth Media hybrid still will be covering stories in underreported regions, with teams of freelancers “made up of vets like me and what we call next-gen journalists from about age 24 to about age 40,” Stucky says. In mid-October, Roundearthmedia.com introduced a multimedia reporting project called the India Network, which will combine traditional and what it calls “socially networked” journalism. The India Network comprises 30 journalists worldwide reporting from India on topics including health, education, environment, culture, and business. The group will broadcast its reportage through social media platforms.

“We need to look at this moment the way we looked at broadcasting when it first began,” Stucky says. “Facebook global journalism is the future.”