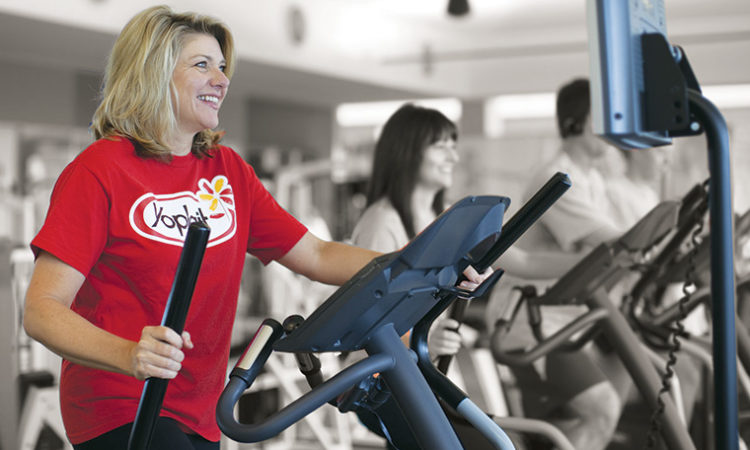 General Mills offers its employees a fitness center at its Golden Valley headquarters.

Inside the Shift Toward Fitness in Minnesota Workplaces

On-site and near-site clinics, along with wellness programs, are producing good results for employees of Minnesota companies.
By Nancy Crotti
December 01, 2017

Lynette Kluver didn’t realize it at the time, but a joke she made during a business meeting would change people’s lives and her employer’s bottom line.

Kluver and her colleagues at Alexandria Industries were discussing employee health and wellness with the company’s insurance broker. A wellness consulting firm had been advising employees on health issues and lifestyle changes for 12 years, based on annual biometric measurements. Employee health was improving, leaving those at the meeting pondering next steps.

“I sort of flippantly said, ‘Well, I think it’s time to open a clinic,’ and we all sat back and looked at each other and said, ‘Well, let’s talk about that,’ ” recalls Kluver, director of organizational development for Alexandria Industries. “It wasn’t that we didn’t have very good health care facilities nearby. There were just some things about the accessibility, the delivery, and we just decided that we really wanted to deliver health care differently to our employees and their family members; and I believed we could save some dollars as well.”

She was right. The aluminum extrusion and precision engineering manufacturer commissioned its wellness provider, Achieve Wellness of Eau Claire, Wis., to start operating a clinic in September 2016 near three of its Alexandria facilities. The 1,963-square-foot “near-site” clinic’s location in a shopping center saved the company precious manufacturing space and gives its mostly Minnesota-based 475 employees and their families some privacy, too.

A nurse practitioner and a licensed practical nurse provide care for minor illnesses and injuries, dispensing common prescription medication. They also administer preventive care such as flu shots, physicals and well-baby visits. All services and prescriptions filled on-site are free to those covered by the company health insurance plan.

Each employee who improves the majority of their biometric scores year over year gets a $100 company bonus. After the clinic had been open 10 months, 70 percent of eligible employees were using it. Company officials haven’t measured time off for medical appointments, but they know it has dropped.

“We don’t have people taking an hour or two to go to the doctor,” Kluver says. “You run over there and 10 minutes later you’re on your way.”

Beyond saving employee time, one of those visits may have been a lifesaver. “We had an individual who thought they had an allergy and [nurse practitioner] Sarah [Breitzman] diagnosed a coronary issue,” Kluver says.

Alexandria Industries expected to break even 18 months after the clinic opened, but may do so sooner. “We’re almost funding it by the cost savings we see from lab expenses and prescription expenses,” Kluver says. “That is really where we’re seeing our return on investment.”

On-site and near-site clinics, once limited to large corporations, are gaining popularity with mid-size employers, according to Rey Balcazar, Minneapolis office business leader for health and benefits broker Mercer. The Midwest is leading the way. Mercer research shows clinics popping up in Indiana and Ohio, and the phenomenon is spreading across the country. 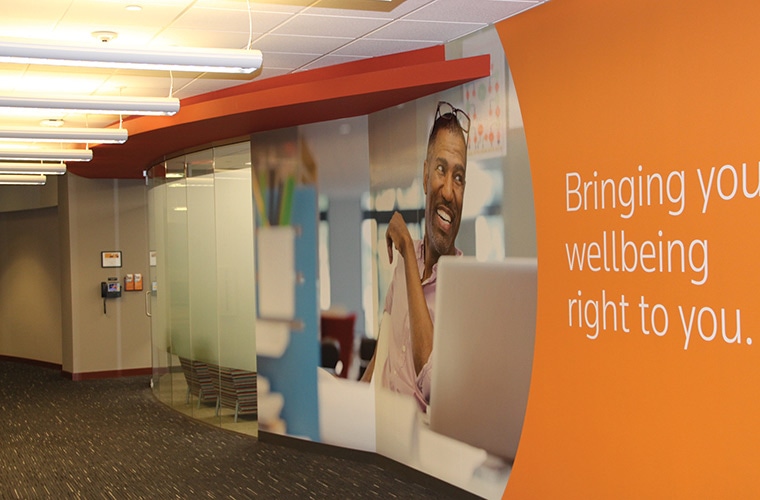 Thomson Reuters opened an on-site health center on its Eagan campus more than two years ago, which is operated by Premise Health.

“We are seeing a strong interest in [workplace clinics],” Balcazar says. “It’s just aligning resources, aligning the collaboration between individual employer groups and, of course, with the proper vendor.”

Some disparate employers are even banding together to share the services of a near-site clinic, particularly in industrial parks, he adds. It’s no wonder, given that the average per-employee health benefit cost is predicted to rise by 4.3 percent on average in 2018, the highest since 2011, according to Mercer’s 2017 National Survey of Employer-Sponsored Health Plans. Previous surveys have found average annual increases of about 3 percent. Survey respondents estimated that 4.3 percent as the cost increase after they take steps to lower benefit expenses. Without those measures, they expected health benefit costs would rise by 6 percent.

Even companies with longstanding workplace clinics are changing them to improve employee health and the bottom line. General Mills has had a clinic at its Golden Valley headquarters for more than 40 years, according to Erin Dunn, director of global business and employee services. The clinic was company-run until February 2016, when General Mills brought in a third-party provider to broaden clinic services and respond to changing health care regulations.

Milwaukee-based QuadMed runs the clinic, taking appointments online, by phone or in person. Employees are seen for acute care, primary care and preventive health services. Preventive care is free; acute care and special visit costs must be submitted to the employee’s insurance plan. The clinic does not dispense prescriptions, but does provide physical therapy and optician services. In partnership with GMI Global Health, it provides acupuncture services.

“People are being seen earlier, and a lot of their illnesses are not escalating to where they have to have an ER visit or have to go to an urgent care over the weekend,” Dunn says. “Because the clinic is very convenient and it’s easily accessible, employees are using it well, and we are seeing a decrease in costs for outside clinics. That helps to contribute to a positive return on investment for the clinic.”

Having an outside organization run a company clinic boosts employee trust that their employer won’t have direct access to their health information, according to these companies.

That kind of knowledge, even among workers known for trust in their employer, can lift wellness program participation and, consequently, productivity, according to a small recent study of workers in five Midwestern industrial laundry plants. “Doing Well by Making Well: The Impact of Corporate Wellness Programs on Employee Productivity,” is slated to be published in the journal Management Science.

The unidentified company in the study provided free annual biometric screenings for all full-time employees in four of the plants. The fifth plant had a different insurance plan and did not participate, but acted as a control. Each employee received their biometric results and recommendations for improvement. Average worker productivity improved by more than 4 percent, or approximately one extra day of work per month per employee. Productivity among sick employees whose health improved increased by 10 percent, and healthy employees whose health improved had an 11 percent productivity increase. 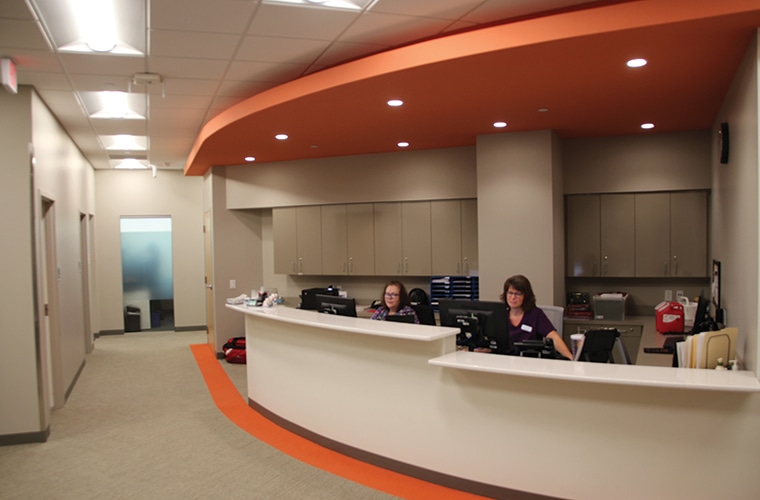 “We conservatively estimate a return on investment of 76 percent, purely based on productivity gains, with a much higher return if the company were able to reduce non-participation in the program and reduce turnover,” write the researchers from the University of California Riverside and Los Angeles, and Washington University in St. Louis. Participation was voluntary; it reached a surprising 85 percent among the Midwestern white and African American workers. Many of the workers were making about $30,000 a year.

“A huge number of these people have never been to the doctor,” says study co-author Lamar Pierce, a professor of organization and strategy at Olin Business School at Washington University. “They may have known something wasn’t right [with their health], but they just didn’t go to the doctor.”

The workers were aging, and two-thirds had an identifiable health problem. Twenty-eight percent improved their health in the year between the blood draws, according to Pierce.

“A large number of the people got better because of this,” Pierce says. “We think it’s because the company made it simple for them to identify that they had a problem and to figure out how to solve it.”

It also helped that the company provided good health insurance and paid sick time. The problem is the size of the study, which required two blood draws, one year apart, to be included in the study analysis. Attrition reduced participation but still allowed the researchers to compare similarly sized groups—56 people among the four participating plants and 55 in the control plant.

“There are lots of reasons why these things might be valuable, but companies don’t have a good measurement on them,” Pierce says. “They ignore the productivity effects, but we know that healthier employees are likely to be more productive.”

The researchers want to scale their next study by examining productivity in a large corporation that offers a robust wellness program. Pierce says the ideal company would have several sites to allow for comparisons. 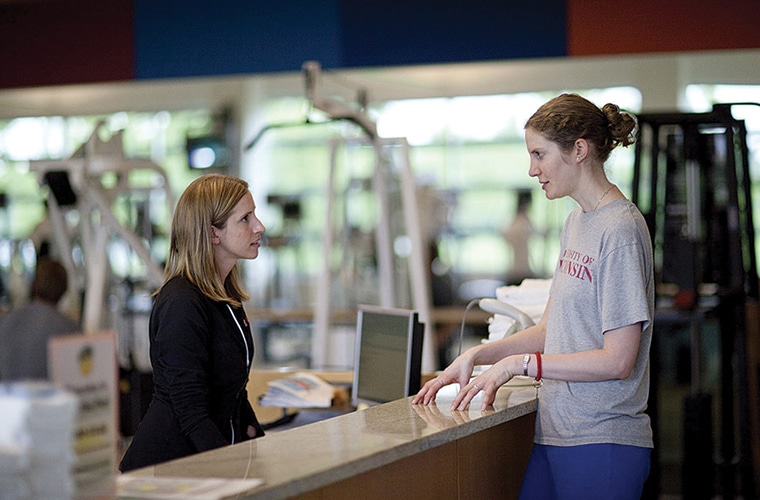 A fitness center is one aspect of the wellness offerings at General Mills in Golden Valley.

They might consider Thomson Reuters, which opened its first on-site health center on its Eagan campus two and a half years ago. Eagan is the news and legal information company’s largest global office location, with about 6,000 employees and contractors.

To emphasize the separation between employer and the health care provider, Thomson Reuters designed the health center to provide an experience similar to a traditional doctor’s office, according to Joell Gray, vice president for Global Wellbeing.

This employee-only facility offers traditional corporate health center services and more. For example, if an employee comes in for a blood pressure check, a nurse may discover through conversation that the employee is under a lot of stress because of a financial issue. That nurse can connect the employee to a clinic-based health coach and to the company’s employee assistance program, Gray explains.

“We’re able to track through our on-site clinical team, but also through our medical provider and also through the health coaching,” she adds. “We worked with the team to allow us to quantify that, based on risk reduction.”

Word-of-mouth about the health center among employees has been “tremendous,” and 90 percent of those who make appointments (largely online) keep them, Gray says.

“Definitely health is improving, not just from a physical health [perspective], but a mental health perspective; from an employee engagement perspective,” she says. “We absolutely see it as an attraction and retention tool. It helps support our mission and goal to be an employer of choice.

“To be able to offer these things and help support their work/life balance—anything we can do to make life easier, we want to do that,” Gray adds.

The perspective is the same with Alexandria Industries, Kluver says. When an employee’s family adopted a boy who needed tube-feeding, LPN Connie Svee bought them a book to explain different types of feeding to the family’s older children.

“It’s like that,” Kluver says. “You don’t expect those kinds of relationships to develop with your health care provider, but they’re only seeing our family.”