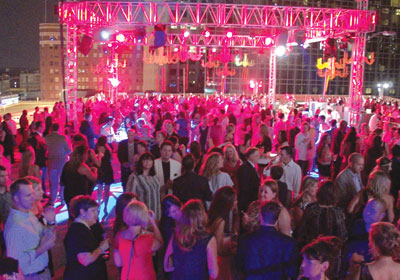 The ins and outs of the Twin Cities’ highest-profile annual fashion/charity event.
October 01, 2012

Charities sometimes claim they “put the fun into fundraising,” but Children’s Cancer Research Fund (CCRF) truly delivers with Glamorama, its high-energy fashion and entertainment show held at the Orpheum Theatre in Minneapolis. Here’s a walk through this year’s event, for the uninitiated.

The show kicked into gear with a surprisingly good performance by Karmin, a new act that attracted its fan base through YouTube postings of hit hip-hop songs rearranged and performed in their own style. Lead singer Amy Heidemann sang and performed better than the evening’s more famous headliner, multiplatinum singer and songwriter Robin Thicke, who closed the show.

Between Karmin and Thicke were a series of fast vignettes designed to position Macy’s as a fashion innovator. Models strutted, and in a few instances, danced onstage showing off designs from Tommy Hilfiger, Sean John, Diesel, Bar III, Marc Jacobs, Donna Karan, among others. The loudest cheers of the night came for the Diesel men’s underwear models. After the show, most of the crowd walked to an after-party, which sprawled onto the parking garage rooftop adjacent to Macy’s eighth-floor event space.

Macy’s starts Glamorama in Minneapolis each year and then reprises it in Chicago, Los Angeles, and San Francisco, supporting local charities in each city. In Minneapolis, most of the food, beverages, performances, and services were donated, leaving more than 80 percent of ticket and sponsorship dollars to go to CCRF. Kids such as Lauren Goehring are beneficiaries. She told guests how CCRF helped her from initial cancer diagnosis through surgery and physical rehabilitation to her graduation from Cretin-Derham Hall this year.