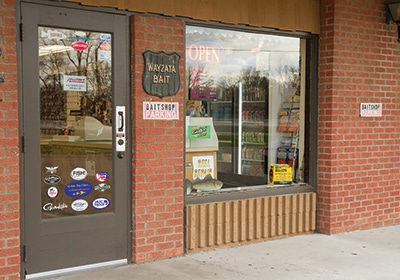 A changing industry and big chains make it a competitive field.
May 09, 2016

On a warm day in late February, owner Bob Sonenstahl bemoaned the impact that weather has on business at Wayzata Bait & Tackle. “My total ice-fishing season came to an end last Friday with that rain,” he said. But weather isn’t the only challenge bait shops face.

According to the American Sportfishing Association, fishing’s popularity peaked in the 1980s. Subsequent studies conducted by the ASA and the U.S. Fish & Wildlife Service suggest that work and family obligations have replaced time once spent fishing. This jibes with Sonenstahl’s experience—the bulk of his customers were once families spending a leisurely day at the lake; today the shop’s busiest time of day is the after-work rush.

With anglers squeezed for time, it’s no surprise that the conveniences of ordering online and one-stop shopping at big-box stores have lured them away from mom-and-pop bait shops. Anglers are now buying more artificial bait than live, making a pre-fishing stop at a bait shop no longer a necessity. While artificial lures tend to be costlier than live, the fact that they can be reused means customers don’t need to replenish nearly as often.

Wayzata Bait by the Numbers

Minnesota Fishing by the Numbers

Large retailers like Fleet Farm can buy lures in larger quantities and offer lower prices than traditional bait shops can. “I don’t have to match them,” says Sonenstahl, “but I’ve got to be close, so the margins have dropped dramatically. Right now I’m lucky to get 15 to 18 percent.”

When Sonenstahl and brother Tim opened the shop in 1973, they joined dozens of other bait shops serving anglers in the west metro. By 2012, just 88 bait-and-tackle specialty shops like theirs remained in the state, accounting for a mere 11 percent of all Minnesota shops selling live bait and indicating that an overwhelming majority also operate a supplementary business on the premises, such as a gas station, convenience store or boat rental.

The brothers don’t have the square footage for that, with 90 percent of the shop’s revenue coming from bait and tackle sales, but Sonenstahl found a way to improve his margins. By making his own jigs, flies and spinners, he fetches a far better return. Plus, his lures are a draw.

With decades of experience on area lakes, the brothers have an asset that’s unmatched by the big-box store: “I can tell them where to go, what to do, what rock to get on, how the presentation is, what the timing is, all of that,” says Sonenstahl. “I live it every day, so it’s second nature to me.”

Sonenstahl thinks this will probably be his last season of business by the lake. It would be a small but notable casualty of changing Minnesota lifestyles.