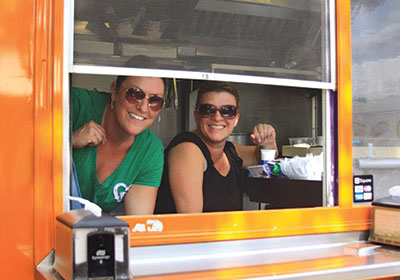 How To Have A Profitable Food Truck

Catering provides year-round income for these restaurants on wheels.
June 08, 2015

For Twin Cities food truck vendors, each day has its peril. “You don’t know what’s going to happen with the weather, you don’t know if people are going to actually come out to the truck,” says Fork in the Road co-owner Amy Frechette, whose goal is to serve 100 people a day. “We always get our regulars, but our regulars are not 100 people strong.”

Fork in the Road was one of the first food trucks to enter the burgeoning market in 2010, offering a changing menu of sandwiches, soups and salads. “Our food is Minnesota-friendly: People recognize it, but there’s a little twist on it,” she says, “so it’s not too weird.”

Frechette and co-owner Kari Offerdahl started street vending in St. Paul and stayed, rotating between a handful of locations in downtown, Lowertown and near the Capitol. They often serve 100 at lunchtime; during the evening concert series Music in Mears, they often serve more than 200 in three hours.

Why St. Paul over worker-dense downtown Minneapolis? “Every single food truck wants to fight for those eight spots on Marquette,” says Frechette. But lunch is a distraction. The real money in food trucks is in catering. “Catering takes a lot of pressure off us to do the daily vending.”

Catering, unlike daily vending, has the profit built into the fee. It allows business to continue during the winter, whereas most Twin Cities food trucks hibernate from November to April. Frechette found that when one corporate client placed a lunch delivery order she could turn it into a half-dozen by emailing other corporate clients nearby and delivering to all of them over the span of a couple hours. In 2014, catering grew to 70 percent of revenue. Currently, Fork averages seven to 14 catering jobs per week on top of street vending.

Like other food-service businesses, margins vary based on the menu and current food prices. Fork in the Road’s best-seller is a barbecue pulled-pork grilled cheese, so when the price of pork nearly doubled last year, the sandwich went from $7 to $8. “People didn’t bat an eye,” says Frechette, “which was nice.”