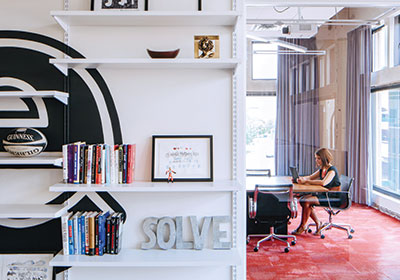 The small Minneapolis firm was named the 2016 Small Agency of the Year.
By Sam Schaust
October 01, 2016

Although John Colasanti’s 48-person Minneapolis agency Solve may be a David within the advertising industry, he believes his firm has the chops to win clients against any of the industry’s Goliaths. “Is a 300-person agency any better than a 50-person agency?” the CEO says. “I’m not sure. Tell me who the top four or five minds are in each agency and that’s where your answer is.”

Apart from Colasanti, the other minds leading Solve are Corey Johnson (president), Eric Sorensen (executive creative director) and Hans Hansen (executive creative director). This core four go back to the late 1990s, when they all collaborated on campaigns at Minneapolis-based Carmichael Lynch. Popular campaigns like Jack Link’s “Messing with Sasquatch” and the “Love. It’s what makes a Subaru, a Subaru” campaign.

According to Colasanti, it was the relationships they built with big name-brands during their tenure at larger agencies that helped Solve attract Porsche, Bentley Motors and General Mills. “A number of those campaigns we made are still running,” he says. Since Solve’s inception five years ago, it has grown consistently; 2015 was its best year on record. The company’s revenue rose 50 percent to $6.8 million, allowing the company to hire an additional 12 people. With 16 active clients, ranging from LeMond Bikes in Minneapolis to the French cheesemaker PrÃ©sident, Solve is hardly anti-advertising, but it is not afraid to poke holes in industry common wisdom.

“Agencies are always being charged with creating videos, and the more views the better,” Colasanti says. In an attempt to prove online video view counts don’t matter, Solve posted to YouTube a 4-minute video showing nothing but a blank white screen and spent a mere $1,400 in promotion. Not only did the video receive 171,000 views—a viral hit by some industry standards—but its engagement rates surpassed industry norms, as 46 percent of viewers watched for at least 30 seconds, and 22 percent tuned in for the whole thing.

The “Blank Video Project” ultimately prompted Ad Age magazine to give its Small Agency of the Year award to Solve, the youngest agency ever to earn the title. —Sam Schaust