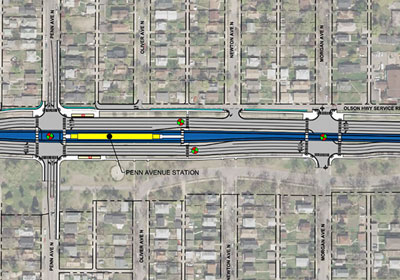 Harrison community members have been working for months to make sure Bottineau LRT is useful — and fair — for the neighborhood's residents.
February 14, 2016

One after another, residents of Minneapolis' Harrison neighborhood took to the microphone to testify.

They were at the community hearing to speak about the extension of the proposed Bottineau light rail line, which would extend the Blue Line from downtown Minneapolis to Brooklyn Park. The meetings were part of a state-created process called municipal consent, in which each city along the proposed route must approve the alignment before it can proceed.

But at two of the recent  hearings — one on Jan. 19 before the Hennepin County Board of Commissions and the Metropolitan Council, and another this week before a Minneapolis City Council committee — elected officials heard something they might not have expected from those who took the microphone.

Or, in legislative parlance, “support with concerns.” Unlike the public meetings that were part of the municipal consent process for the extension of the Green Line, however, the concerns raised aren't aimed at scuttling the process. Far from it. In fact, the testimony by Harrison community members has been meant to make the Bottineau Line more useful — and more fair — for the neighborhood's residents.

“I’m looking forward to the light rail, as are many of the people I talk to,” Richard Panzironi, a board member of the Harrison Neighborhood Association, told the Minneapolis City Council's transportation and public works committee. “If we can all just get together and see that it is designed in an efficient fashion that serves the needs of everybody.”

'They're not asking for the moon'
The Harrison Neighborhood Association, along with neighborhood institutions such as Redeemer Lutheran Church, has been engaged for a long time in the planning of both the Blue Line extension and Southwest LRT. Shauen Pearce, executive director of HNA, said the organization has been a part of all of the working groups and committees that have been meeting to help plan and design the line.

So far, HNA has hosted 45 meetings and knocked on hundreds of doors to keep residents and businesses up to date.

Critics of the preferred alignment have complained that the line should have passed directly through North Minneapolis — at street level on Penn Avenue. That route was rejected by the Met Council as too expensive and disruptive because it would have taken out many houses on Penn. Instead, the proposed route will travel west from downtown on the median of Olson Memorial Highway to the border of Minneapolis and Golden Valley, where it will descend to the Burlington Northern right of way and head northwest until it transitions to West Broadway Avenue in Brooklyn Park.

The current alignment would mean that two of the stations serving north Minneapolis residents would be located in the railway gully beneath Plymouth Avenue and Golden Valley Road. The other two, at Penn Avenue and Van White Boulevard, are located along the northern border of Harrison. But they are awkwardly located as well: in the center of what is now and what will remain a busy, six-lane trunk highway.

Denetrick Powers is the transit organizer for the Harrison neighborhood group. He and others have been vocal about their worries about the line — but also their hopes. “The Harrison neighborhood as well as the Harrison Neighborhood Association supports the development of the Blue Line Extension light rail project as an investment to catalyze development and investments for the neighborhood,” he told Minneapolis council members. “But we do not support it as a commuter line…Harrison is not an extension of downtown or the North Loop, and we do not want a downtown feel.”

A “commuter line” means a train that simply passes through the city neighborhoods en route to delivering suburban commuters to downtown. Pearce said the neighborhood wants a line that connects residents to jobs, not only in downtown and beyond, but also north to jobs in Brooklyn Center and Brooklyn Park.

Powers said the HNA also wants better safety for pedestrians and bike riders; mitigation for noise and dust during construction; and a requirement that at least 30 percent of any new housing units developed along the right of way be affordable. The neighborhood group also wants a height limit on new buildings to retain some sense of the current neighborhood feel, and they want residents to have access to both short-term construction jobs and long-term jobs from any economic development in the area.

Short of making Olson Memorial Highway less of a barrier, several of the neighborhood residents at the meetings asked that pedestrians at least be given more than 30 seconds to cross — a time limit that could require two light cycles to cross, clinging to the median in between. That change should happen now and not wait for completion of the light rail extension in 2021, residents say.

Hennepin County Commissioner Linda Higgins, whose district includes Harrison and the other neighborhoods along the line, said she thinks the organizations that testified Tuesday and last month have a good chance of getting the changes they seek.

“This is a much-more robust neighborhood organization that it was 10 years ago or even five years ago,” Higgins said. “It helps that they focus on what can get done. They’re thoughtful, they’re not asking for the moon.”

In fact, Higgins said that many of the requests are already “in the works, will be in the works or are being talked about.”

Minneapolis is on record supporting a less auto-oriented configuration for the highway, with fewer lanes, lower speeds and more space for bikes and pedestrians. But Dan Soler, the Metro Transit project director for the extension, said the Minnesota Department of Transportation will not agree to any reduction in lanes when Metro Transit designs and rebuilds Highway 55. MnDOT has agreed to a speed limit reduction to 35 miles per hour, but not to any changes that will reduce traffic volume. Soler said Olsen Memorial Highway sees a volume of about 30,000 vehicles per day.

“But wouldn’t we assume that some of these drivers will take this new, very expensive train?” asked Minneapolis Council Member Lisa Bender.

“We hope people will,” Soler said. “But they won’t take it to Plymouth and they won’t take it to the far reaches of Golden Valley because it doesn’t go there. Will it help? Yes. It will provide another option for people to move around the region and take some people out of cars. But something tells me there’s gonna be someone right behind them.”

While voting in favor of municipal consent, Bender and Council Member Cam Gordon called the lack of changes to Olson a missed opportunity. City staff reported, for example, that the economic development opportunities along Olson are greater if the road is four lanes rather than six.

“I think this is such an important project and a great investment for our city,” Bender said. “But this project is not realizing its full potential for the city of Minneapolis.”

She said transportation planning doesn’t look out far enough in the future. “Our traffic models assume people will continue to drive at current rates. But if we plan our transportation systems to make it easy and cheaper to drive, they will. We’re building for the status quo, not for a future that prioritizes transit and biking and walking.”

Thomas Siburg, the director of urban planning and asset development for Redeemer Center for Life, Redeemer Lutheran Church's non-profit satellite, said the church will file a federal complaint against MnDOT claiming it is in violation of rules that require transportation projects not discriminate against protected classes.

“The neighborhood just wants the same benefits that are afforded in other MnDOT roads and projects across the state,” Siburg said. He cited the amount of time it takes to cross what he termed a barrier, the lack of maintenance and safety improvement on Olson.

Council Member Blong Yang represents the area most-effected by the Blue Line extension. He voted in favor of municipal consent. “My only regret is that this line didn’t cut through more of North Minneapolis,” Yang said. “Such is life.”

But he added that believed most residents of North Minneapolis want the line to be built. “They want to see all of the pluses and all of the advantages that come with it.”