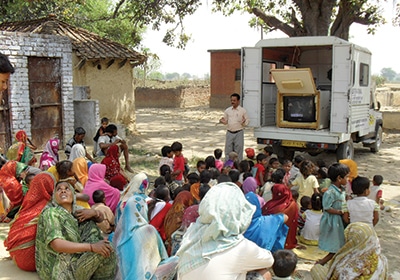 How Minnesota Nonprofits Are Changing The World

Hundreds of local nonprofits, some led by immigrants, are changing the world.
September 30, 2015

During the 1980s and 1990s, Abul Sharah traveled internationally doing business development for Eden Prairie-based MTS Systems and Alliant Techsystems. Born in a small village in northeastern India, he earned a Ph.D. in engineering physics in Canada and had initially moved to Minnesota to work at Tectonics Research in 1972. But a business trip back to India in 1996 changed his life. He met Mother Teresa, and was inspired to do something for his native country. “I was determined I would find a way to give back,” he told me.

Today Sharah is the founder and president of International Village Clinic, a 13-year-old grassroots organization that serves 130 rural villages in northeastern India. IVC provides both curative medicine through health clinics treating patients at a nominal charge, and free prevention programs. Prevention targets malnutrition, vaccinations and support for pregnancy, infant and early childhood care. IVC employs four doctors among a staff of 60 in India and has no paid administrative staff. With an annual budget of $100,000 to $150,000, IVC reaches 250,000 people who would not otherwise have access to these medical services. Rotary International has been a major supporter, as have individual donors.

IVC is one of hundreds of nonprofits in Minnesota whose mission is international relief, development, education, environmental protection, among other causes. Called NGOs, which stands for “non-governmental organizations,” their origin stories often are similar to IVC’s. Their dynamic founders have traveled internationally and been inspired to respond to the challenges faced in developing countries, or, as immigrants, they feel a desire and a duty to help their native countries.

Evidence of this growing cohort of internationally focused organizations is the surge in membership at MINN, the Minnesota International NGOs Network. MINN now boasts some 1,500 individual and about 80 organizational members. MINN’s annual Idea Summit will be held this year Oct. 16 at the Humphrey School of Public Affairs at the University of Minnesota. Several hundred people will gather for the all-day meeting to network, learn and exchange expertise. The 2015 summit theme is “Fostering Minnesota’s global engagement,” and the keynote session, a dialogue on international refugee issues focused on Minnesota’s role, will be a conversation between former Vice President Walter Mondale and Dr. MayKao Hang, president and CEO of the Amherst H. Wilder Foundation. Registration is open to anyone interested. To learn more, visit minnesotangos.org/ideas.

MINN publishes a directory of Minnesota organizations working internationally and lists these organizations on its website. Many international organizations are one- and two-person “mom and pop” shops with founders raising money from friends, family, church members and service clubs. Karen Baumgaertner, MINN’s co-founder, described international work as “enriching but depleting. You aren’t embedded in a community that supports you; you are oceans away, so you are desperate for collegial support. At MINN you can find people who ‘get’ what you do. MINN plays a major role in refreshing, renewing and connecting members to each other for learning and mutual support.” MINN also is working to extend the network to first-generation Americans who want to start international nonprofits. “They don’t always understand how philanthropy works, or our local ways of doing business in the nonprofit sector.”

One way international nonprofits have found to raise money is through GiveMN, a web portal for charitable contributions in Minnesota. Each November, GiveMN rallies the community in “Give to the Max Day,” where thousands of organizations ask supporters to donate online. In 2014, more than $18 million was raised on Give to the Max Day. Part of the total was $400,000 given in relatively small amounts to U.S.-based nonprofits focused on international projects.

More than 250 of the U.S.-based nonprofits concentrating on international projects are now using the GiveMN portal for fundraising. Andy Goldman-Gray, GiveMN’s interim executive director, reports that “anecdotally, the younger you are, the more likely you are to give to international causes.” This trend, coupled with GiveMN’s robust digital platform that younger donors are comfortable using, is particularly helpful for small and emerging organizations. They can reach individuals directly without the need to navigate the formal and cumbersome application and decision-making procedures of organized philanthropy. Goldman-Gray said that these organizations do well on the GiveMN platform. “It’s interesting to see how Minnesotans are making a difference internationally, and that so many people want to support international causes being led from here.”

A look at MINN’s membership shows that large nonprofits also are involved. The American Refugee Committee, Books for Africa, Feed My Starving Children, the Center for Victims of Torture, and Land O’Lakes International Development are some of the larger organizations in the MINN membership. Work in Africa is a focus of many Minnesota nonprofits, according to Sara Stalland McGarraugh, MINN’s current (volunteer) president; Southeast Asia, and South and Central America also are hubs.

You can learn more about MINN and its members on its website or attend the Idea Summit to meet the passionate and dedicated people working internationally from our state. You’ll see the ways Minnesotans are exporting our community’s well-known reputation for generosity, civic engagement and a concern for the welfare of those in need. Some people talk about making the world a better place. These organizations not only talk the talk: they walk the walk.