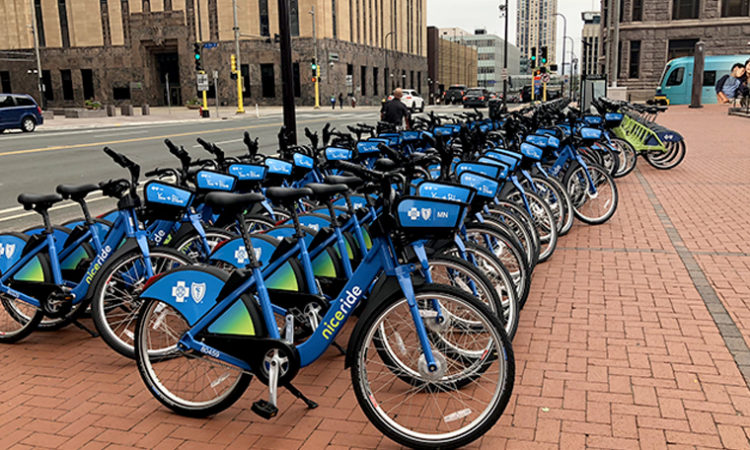 Nice Ride is tracking the popularity of each Minneapolis hub and where riders take the bikes, data it shares with the city. ( Photo by Jessica Lee/MinnPost)

How Minneapolis and St. Paul are Acclimating to Dockless Bike Sharing

Everything you need to know about dockless bike programs across the Twin Cities metro.
By Jessica Lee
October 18, 2018

It’s been almost a month since Minneapolis launched a one-of-a-kind program for dockless rental bikes, while St. Paul, Golden Valley and Edina have been rolling out new bike-share programs of their own. Here’s everything you need to know about how those programs have been proceeding across the Twin Cities metro:

Yes. The city of Minneapolis joined forces with Nice Ride, a nonprofit based in Minneapolis, beginning in 2008 to launch a bike-sharing pilot. The program eventually expanded to St. Paul, and there are now 1,850 of the lime green Nice Ride bikes across the Twin Cities. People pay $1 for a single ride and another $2 for each additional half-hour. Customers who use that system must return the bikes to one of 200 gray stations and lock them up after each trip.

Nice Ride spends upwards of $50,000 on just one of those bike-parking kiosks (and its bikes) alone, according to the nonprofit’s executive director, Bill Dossett. “You have long-term costs, too; you have stations with a lot of equipment that needs to be maintained,” he said.

Minneapolis decided early on to have just one company operate the new program. And a Brooklyn-based for-profit bike-share operator, called Motivate, won a bidding process for the job. (Lyft is in the process of acquiring Motivate.) Nice Ride still oversees the relationship with Motivate, which is paying for the new dockless bikes and is responsible for maintaining its equipment. Blue Cross Blue Shield provides title sponsorship for the bikes.

So what’s special about the Minneapolis program?

Having heard reports of dockless bikes wreaking havoc in cities elsewhere — people are stealing and vandalizing them, or leaving them parked in all sorts of places — Minneapolis officials wanted a system sure to satisfy disability-rights activists, urbanists and riders alike.

“How do we better accommodate an idea of dockless system but avoid some of the pitfalls of having bikes anywhere and everywhere?” recalled Josh Johnson, mobility manager for Minneapolis’ department of public works.

The answer: “virtual parking hubs,” which are spots on sidewalks designated by white tape and signs.

They cost an average of $600 each in materials and staff time, according to Nice Ride. The public works department approves the locations through a permitting process, and the service knows if people are following the parking rules since each bike has a GPS.

What other cities in the metro are going dockless?

St. Paul took the more mainstream approach. It gave permission to a Silicon Valley startup that also runs electric scooters, called Lime, to launch a dockless bike program in August, following approvals for dockless bike programs via the same company in both Edina and Golden Valley. Riders can leave those bikes anywhere (as long they are left out of the public’s right of way) when they’re done.

Nothing prevents a Lime customer from taking a trip to Minneapolis, or a Nice Ride bicyclist from cruising to St. Paul. But customers must return the bikes to the city they began their trip in to avoid additional fees.

Have people been following the rules?

For the most part, riders seem to understand the parking guidelines, according to project leaders.

Minneapolis is monitoring reports of bikes in bad places via its 311 program, Johnson said, and only a few people have complained so far. Nice Ride also fields complaints.

When there are problems, a Nice Ride crew goes out and corrects any tipped bikes within hours, according to the nonprofit’s general manager, Melissa Summers. If it’s a customer’s fault, the nonprofit sends an email warning to the person. Repeat offenders will eventually face fines after the program’s newness wears off and customers get used to the system, she said. “What I’ve seen in the last three weeks is, it’s going to work,” Dossett said.

In St. Paul, people should contact Lime directly when they spot one or more of the city’s 600 dockless bikes parked amok, Collins said. “You certainly drive around the city, or walk around the city, and you see bikes that aren’t properly parked, and that’s something that we’re working through,” he said.

We don’t entirely know — yet. With Motivate’s software, Nice Ride is tracking the popularity of each Minneapolis hub and where riders take the bikes, data it shares with the city (riders’ identities are not shared). But engineers are in the process of building a public database to provide people a more granular look at trends.

Generally speaking, hubs at the University of Minnesota are the most popular now, Summers said. “As GPS improves, we’ll be able to do a lot more accuracy of the pinpointing.”

Lime also keeps records and shares it with St. Paul. The busiest spots include Como Park, Frogtown and near the Green Line light rail, Collins said.

Are my taxes paying for the new bikes?

Nope. Private funds pay for the bikes, technology and all associated costs. Because of that, the overall cost of the dockless programs are hard to say, according to project leaders.

In Minneapolis, Dossett emphasized that Motivate made a point to invest in higher-priced bikes this time around so that they last longer and offer smoother rides.

Both cities charge the bike vendors for administrative costs. Minneapolis collects a yearly fee of $5 per bike from Nice Ride, while St. Paul charges $20 per bike annually, according to the cities’ public works departments.

Some public money, though, has helped Nice Ride with costs (the docked bikes and stations) over the years. Minneapolis has contributed at least $360,000 to the organization and passed along about $3 million in federal nonmotorized transportation funds.

Will the bikes be available during the winter?

Depends where you are. Nice Ride is planning to remove all of the original, lime-green docked bikes from streets on Nov. 4 and then collect most of the new, blue dockless ones on Nov. 16, Summers said.

The company will keep a small fleet of dockless bikes with special tires available on the University of Minnesota’s campus for a winter pilot program.

In St. Paul, the city’s contract with Lime lets the company decide whether to provide year-round service, Collins said. “They’ve suggested that they are not going to operate over the winter,” though it is unclear when, exactly, the company would pull the bikes off streets.

So far, the public works department has approved almost 180 permits for virtual hubs, and Nice Ride crews have installed most of them. They’re seeking the public’s feedback on good locations for additional hubs next spring.

And with more hubs will come more bikes. Next year, Nice Ride wants to have some 3,000 dockless bikes circulating — more than triple than the fleet’s size right now — before replacing the original green bikes with new blue ones.

Also, the nonprofit’s agreement with Motivate requires at least 150 electric bikes in the expansion, Dossett said. Supporters laud the new technology for its eco-friendliness and ease getting people across hilly terrain. Several cities throughout the country already have them.

“One of the goals of the transition is to put ourselves in the position to use the existing equipment to the fullest potential,” when the technology evolves further, Dossett said. “What we know is the electrification of bike share is coming fast … faster than any of us expected.”