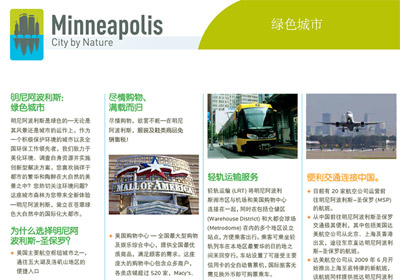 How Mall Of America Hopes To Lure Chinese, The ‘World’s Most Lucrative Tourist’

It was nearly impossible for a Chinese citizen to travel outside his or her nation when the Mall of America opened in 1992. And even if they could, they had no money to spend.

Twenty years later and Chinese tourists are the world's biggest spenders. More than 100 million Chinese are expected to travel abroad this year, splashing out well over $100 billion during their travels. By 2016, China will be the world's biggest business travel market—and by 2020 some have projected that annual international trips by mainland Chinese will reach 200 million.

The Mall of America is now joining the fight for the world's most lucrative tourist.

And it is a fight. In Europe, where a solid chunk of the tourism industry more or less relies on Chinese tourism, Britain and France are at war again—over attracting Chinese visitors. As Britain rushes to scrap its colonially bureaucratic visa restrictions, Paris is importing a police force from China to protect its VIP tourists.

When it comes to attracting the world's new No. 1 spending tourist, price is a big advantage for the Mall of America, and for America in general.

“I have witnessed Chinese buy 20 pairs of the same shoe to bring back for friends and family, because it is so much cheaper,” said Lauren Himle, the Mall of America's first ever China-focused tourism account executive.

With its 10 million-square-foot expansion, the mall hopes to attract 8 million more international visitors, an increase of 62 percent. If Himle and other Minnesota groups can swing it, a large share of this increase will be cash-in-hand Chinese.

MOA struggles to get tourists' attention

When I lived in China, I casually polled a smattering of professional friends in Shanghai and only one had heard of the MOA—and none at all had heard about Minneapolis. The one, an HR manager for an American Fortune 500 firm, described the MOA, from his understanding, as “the shopping paradise of girls.”

While New York, Los Angeles, Las Vegas, and San Francisco are famous in China, America's flyover country in general struggles for awareness. The biggest challenge, Himle says, “is without a doubt raising awareness” of Minnesota and MOA.

The mall's struggle begins with the fundamental fact that much of the information out there uses different Chinese names.

At the travel section of the huge information portal 163.com, the MOA is the “ç¾å½åå” (mÄiguÃ³ shÄngchÃ©ng) but at its Wikipedia-like page on Baidu, often called “China's Google,” it's also called “ç¾å½è´­ç©ä¸­å¿” (mÄiguÃ³ gÃ²uwÃ¹ zhÃ²ng xÄ«n). The mall officially uses the first translation, but the problem is evident.

Other barriers are out of local control, such as tight federal visa requirements for Chinese tourists. (Taiwanese and South Korean visitors receive waivers.)

Another: no direct Minneapolis-China flights. Chinese MOA visitors have to connect through Japan, Chicago or Detroit or some other city, making a trip not only more expensive, but more time-consuming.

Data intelligence is also an obstacle. Roughly 5 million of the mall's 42 million annual visitors come from outside the United States, but the MOA struggles to determine exactly where those 5 million come from. This will only because more difficult as China's restrictions on tourism loosen and more of the nation's travelers opt out of tightly managed tour groups in favor of independent, individual or family travel.

Competition is intense, and U.S. malls need to distinguish themselves with attractions and services “that specifically appeal to the Chinese shopper,” says Alexander Glos, CEO of i2i Group China, a media marketing and sales consultant for global enterprises interested in developing and strengthening themselves in China.

“It's unlikely that a Chinese shopping customer is going to travel to a specific destination just because of a particular shopping experience—unless that shopper believes the services and experience will be unique and specifically designed for their needs,” Glos notes.

Himle's own experience backs up Glos' observations. She said that stores—such as Coach—have hired Mandarin speakers to make Chinese tourists more comfortable. Those outlets have seen a “substantial increase” in Chinese customer purchases.

Other programs are more controversial. Tour guide incentives are characteristic of China's travel market. And yes, “incentive” is a nicer word for kickback. Chinese tour guides who deliver their big-spending Chinese shoppers take a percentage of the group's total store spending, while delivering a special store discount to the group's shoppers.

These incentives are generally around 5 percent, and are the standard practice worldwide when it comes to Chinese tourists. (For example, malls in Southern California like the Beverly Center have advanced incentive programs and Mandarin concierge programs already in place.)

Himle calls this a “tricky area” for MOA, with stores on both sides of the argument. For example, Coach and Sterling Jewelers have opted into incentive programs, while Nordstrom's does not. (Mall representatives originally said Macy's didn't, but corrected that to say the store offers gift card givebacks, not cash.)

Himle does not take a side in the debate, except to note that such programs help “track how many Chinese visitors we have coming through the mall, as the guide needs to register the group and the group reports the registration number in order to receive the discount or commission.”

Ultimately, Glos says, “mall operators have to communicate these services to the Chinese before they depart or plan their travels to the USA.”

Minnesota is far from a lost cause; 5.6 percent of the state’s overseas visitors are Chinese, Deef notes. MSP saw 33 percent more Chinese visitors last year than the year before—though Chinese traveler count still stood at only 10,472, fewer than half the 22,253 from the United Kingdom.

Despite its unheralded status, Minnesota does have advantages for some pockets of Chinese tourists.

When Mayor R.T, Rybak visited China in 2009, it was mostly about Target. However, he also smoothly mixed in some tourism interests, to demonstrate how Minneapolis businesses, and good coordination, could be a tourism marketing message multiplier.

Said Himle, “We are looking at leveraging the fact that the University of Minnesota has the largest population of Chinese nationals, as well as a huge alumni base in China with an alumni office operating in Beijing. The Mayo Clinic, Medtronic, 3M and Cargill are all also huge draws.”

The mall works with operators to ensure the city's corporate visitors include a trip to the mall. The MOA's proximity to the airport makes this an even easier possibility.

The MOA is also getting help from partners. Explore Minnesota Tourism has issued a $45,000 RFP for China-market representation to trade groups and media there. This outreach will include a Mandarin website and social media outreach.

Last year, the Minnesota Legislature also bumped up the state’s marketing budget by $5 million, a significant chunk targeted on China.

Beyond the region's Fortune 500 draws are the state's natural wonders. With China becoming increasingly polluted and its citizens increasingly concerned about pollution, the abundant lakes, parks and eco tourism make for an excellent tour package that includes mall shopping.

But even here, the mall faces a steep, competitive climb to get a foothold in the mindspace of Chinese tourists who face increasingly wide options.

New Zealand is quickly becoming a favorite destination for its landscape. Domestic travel by RV is growing. Carnival just sent its fourth cruise liner to China to meet booming demand. All are indications that as the MOA ramps up, marquee destinations are not going to just hand over the barcode scanner.