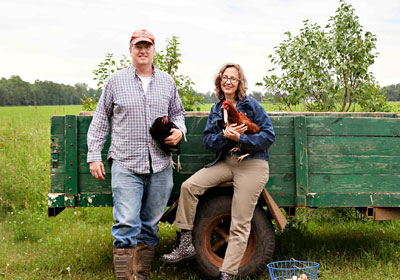 How Locally Laid Is Cracking The Egg Business

The Duluth-area company prides itself on tastier, healthier eggs that comes from treating its chickens better.
April 09, 2015

For Jason and Lucie Amundsen, answering the age-old question is easy: The chicken always comes before the egg.

When the quirky couple couldn’t find local eggs at their Duluth co-op, they hatched a business plan: Locally Laid. The Wrenshall-based company raises “salad-eating, poultry athletes”—their nickname for their chickens—on open pastures in small flocks near where the eggs are distributed.

The thought is that chickens not cramped in cages are happier. And what’s good for them is good for the eggs they hatch.

“The number one difference (between us and industrial egg farms) is that our girls are out on rotated pastures,” Lucie Amundsen said. “They always have fresh grass and seeds and tasty bugs—and that really makes for a better-tasting egg.”

The company has obviously found a niche: More than 40,000 dozen eggs are produced each month. In 2014, Locally Laid’s revenue grew 288 percent year-over-year.

There’s no doubt some of that growth comes from marketing. While the Amundsens are selling tastier eggs, they also have a knack for getting others' attention. In 2013, for instance, they were one of the finalists of Intuit’s Super Bowl competition that could have landed them a free ad slot had they won. They reached the spotlight again when a customer sent a letter complaining about the “sexual innuendo” of Locally Laid’s advertising and its “vulgar” name.

The response, an open letter than Lucie sent back to the man, went viral. The 1000-plus word manifest provided a one-two punch of facts about the agriculture industry mixed with a Minnesota Nice folksiness. The letter resonated with many as it spread across social media and news websites.

“I thought about me and 10 academics would care about this,” Amundsen said. “But it got a huge response. People are starting to understand the bigger picture of agriculture.”

The company has been looking to expand, but raising capital and their self-imposed requirement of providing their chickens high-quality feed and space to roam has limited that. The family runs its own farm and contracts out to several farmers in Minnesota, Iowa and Indiana—each with flocks of about 3,000—that follow strict egg production rules.

Locally Laid has been pitching to investors to allow expansion to new farms with additional employees that could serve as quality-control agents.

Part of the struggle is that the company sits in a category called “middle ag”—too large to sell all their product directly to customers through farmers markets and other small distribution channels, but too small to compete in the commodity market.

“Agriculture is a hard, low-margin industry,” Amundsen said. “We’re swimming upstream against big, entrenched interests that get a lot of subsidies.”

Despite these struggles, the family can’t help but make a laugh about their business. From their cheeky name to pun-filled marketing, Amundsen said it helps keep spirits high.

It’s that attitude, mixed with an outsider’s view, that just might help them change agriculture practices throughout the country.

“Jason said to me, ‘I want to change the way eggs are produced in this country,’” Lucie explained. “What a hubristic thing to say.

“We shouldn’t be doing this, but maybe we are supposed to because we’re not beholden to the rules. We’re giving the food industry a nudge from Duluth, Minnesota.”