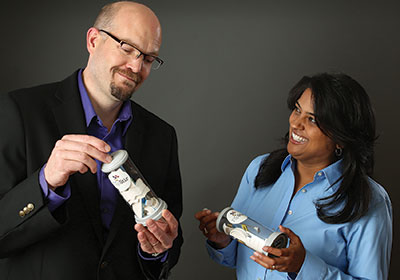 How It All Fell Into Place For Enlivenze

After two decades of incubating their idea, Louis Hall and Suchi Sairam launch Enlivenze and bring their game FlipStir to market.
July 03, 2014

The initial investment was $65,000, which co-founders Louis Hall and Suchi Sairam kicked in.

The main product Enlivenze makes is the FlipStir, a puzzle that is solved by using gravity and a wand to manipulate the pieces into place.

The product is available locally at Moss Envy and a few other retailers, and online through the company’s website.

[This is one of three Spotlight stories from the July 2014 issue, which focused on the theme of business owners' “Aha” moments. Also read the other stories about Bercom Inc. and Irish Titan.]

Twenty years ago, Louis Hall had an idea for a new toy. Spending his days volunteering at the Science Museum of Minnesota, he saw the engagement of visitors—adults and children alike—when they were offered the chance to get hands-on with exhibits. He drew inspiration from the infinitely solvable and self-contained Rubik’s Cube to create the first prototype of the FlipStir.

Entirely contained in a tube, the FlipStir is a puzzle that is solved by using gravity and a wand to manipulate the pieces into place. Hall showed the prototype to a few people and got positive feedback. He knew he was on to something.

But with a young family and a budding career to nurture, Hall turned his focus to other things. He landed a job at Ergotron and has been there for 18 years. Still, he kept the FlipStir in mind and even prototyped a couple other toys. And it was at Ergotron seven years ago that he met Suchi Sairam, who would become his business partner.

A graduate of MIT with a background in engineering and marketing, Sairam joined Ergotron in the market development and new product innovation area. She and Hall got along well, and when Sairam began to wonder what was next for her, Hall made an offer: “If you ever want to start a company, I’ve got an idea for you.”

Sairam was interested, but declined at the time. “I gave him some advice and said good luck with it because I didn’t have the bandwidth to help,” she says.

Hall began the process of licensing his toys, but wasn’t getting much traction on his own. In 2009, he began submitting applications for patents; he secured them in 2012. For Hall, that was a breakthrough moment.

“When I got the patents, with full recognition from the feds, that was a significant point,” he recalls. “I didn’t hire an attorney. I did all the drawing, all the gobbledygook language—until you get the approval, you don’t know if it’s actually going to happen.”

Hall and Sairam revisited the concept. With a patent underscoring the legitimacy and uniqueness of the toy, along with Sairam’s expertise, they had all the tools they needed to start for real. And they came up with a company name: Enlivenze, which is what they hope to do to the category.

While they consider each other co-founders, Hall still works full-time at Ergotron and modestly refers to himself as “just the inventor.” Sairam is the majority owner and works full-time on Enlivenze. She took the FlipStir to debut at last year’s Chicago Toy and Game Fair, the only toy show open to the public. Her breakthrough moment comes every time someone new picks up a FlipStir and “gets it,” whether it’s a teacher, a student, a younger child, a business professional or anyone else beyond the traditional toy demographic.

Now it’s all about building a buzz. Sairam says the initial investment in the company has been about $65,000, which they’ve boot-strapped, and she and Hall hope to turn a profit once the holiday season kicks in.

The two are cautiously optimistic and conscientiously inclined—refusing to use cheaper parts and labor from overseas manufacturers, instead keeping most of their production in Minnesota.

“You can’t sacrifice the feel-good part for the business part,” Sairam emphasizes. “All these vending relationships made business sense.”

Currently, the FlipStir can be found in a few local specialty toy stores such as Moss Envy in Minneapolis, as well as online, and they are working with national specialty retailers for a broader reach.

“When you’re first ramping up you have to take some risk, and there’s no exact science to it,” Sairam notes.

Enlivenze started with a pilot run of 1,000 units, which was cheaper per unit than producing a small run of 500 but wouldn’t overburden them with too much extra inventory. Sairam says they’re now in the process of investing in the next 10,000 units, as well as expanding their product family to include similar open-ended-play toys. After 20 years in the making, the battery-free FlipStir is jolting to life.