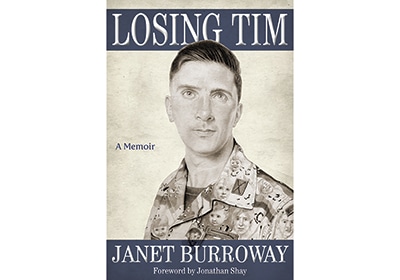 How I Published Losing Tim Without Losing My Shirt (Barely)

The secret is to keep your mother on speed dial.
September 01, 2014

He wanted to write the book based on his experience covering the war in Afghanistan, and had notebooks filled with observations. He just wasn’t sure he could land a publisher.

Well, hell. I figured that was too good an idea to not exist in the world, so I blurted out, “I’ll put it out for you!”

I had no idea what I was talking about.

I was a magazine guy, employed at Thomson Reuters at the time. But books—how hard could they be?

Fast-forward a year, and I’m at a car rental counter at LAX without the money to cover a Kia Rio to get to the Los Angeles Times Festival of Books, where my author, Janet Burroway, is appearing on a war panel to talk about Losing Tim, the story of her son who likely had PTSD and took his own life. (Martin ended up publishing his work as a nine-part series at Stars & Stripes and didn’t need my help; you can read his work here.) I was stranded. I wasn’t flat broke, but I promised myself I wouldn’t touch my 401(k) to launch my imprint, Think Piece Publishing, and I haven’t to this day. But it’s been close.

So I called my mother. She transferred the $300 I needed into my Wells Fargo account so I could rent the car. (I hadn’t considered the security deposit.) And off I went to the festival. (See Janet’s appearance on C-SPAN at cs.pn/1u9TvMC.)

It’s an adventure I’m still on. It’s been great fun making a beautiful book. It has also been humbling. I was naÃ¯ve. It took me months to flesh out a business plan. But I did have a strategy. It would be publicity- and social media-driven, which would drive people to my site, which would include a page on how to order the book on Amazon. That was why I chose not to go through traditional channels of bookstore distribution, because the cost up front was out of my price range. (Someone once told me to get the book on the front table at Barnes and Noble would cost a quarter-million dollars.) I was a dude with $20,000 saved up. So no print retail distribution for me, except for stores that would take it on consignment.

I have also learned some valuable business insights along the way about entrepreneurship. Namely:

Check Your Idea With People You Trust. Many Times. Until They Make You Do It.

Oh, did I hound my friends, for months. I’m pretty sure at least two still screen my calls. I liked my idea, which was of launching an advocacy imprint using social media channels for outreach and sales, but I needed a push. More than a push— a shut-up-and-do-it-already push. At the end I asked several of my friends to tackle me if it was a bad idea. None of them stopped me.

Make Sure It Looks Good

I read in Walter Isaacson’s biography of Steve Jobs that the Apple founder obsessed over fonts for the packaging of Apple products. I hadn’t given the visuals three seconds of thought when I left my job to do Think Piece. I’m a word guy. And I figured I’d just teach myself WordPress and design the elements myself.

That would have been a dee-sa-aster. Word guy over here. No visual sense whatsoever. Probably would have gone with clip art, and it would have killed everything right out of the gate.

When I finally came to my senses, I hired a graphic designer to do my logo and a web developer to do my site. It turned out really nicely, and I got a lot of compliments on it in those pivotal first several months. Wasn’t from me, I can tell you that.

Work With a Genius

The unexpected delight of my last year was meeting Janet Burroway. She’s been nominated for a National Book award with Raw Silk, a Pulitzer for The Buzzards, and her textbook Writing Fiction is the most taught book of its type in college classrooms, in its ninth printing. She’s been published by all the big houses, but no one would touch Losing Tim, as, let’s face it, it’s not a fun read. So her agent shopped it to me. Break of a lifetime. The writing is gorgeous, and the author so classy and warm.

Here’s her unforgettable first paragraph: “Every suicide is a suicide bomber. The intention may be absolutely other—a yearning for peace, the need to escape, even a desire to spare the family. Nevertheless the shrapnel flies.”

Have Your Mom on Speed Dial

I think we’ve covered this one. Save all the money you can and expect to go broke. It’s fun!

Only Do It If You Love It

That’s the only way you won’t go insane with wanting to work all the time. This will be your baby. You might drop it and kill it. You will drop it. But you won’t kill it. Mistakes will be made. Learn from them and try not to make them again.

I’ve made many, many, many mistakes. I’ve left many half-started projects on the literary battlefield. But a few projects have survived, including a few digital singles, a video interview with a rock star, and Losing Tim.

It’s been exhausting and exhilarating. There have been moments where I thought this could all be a mistake. Like the time I drove to Chicago for a three-hour book reception with Janet, only to drive straight back home because I couldn’t afford a hotel. But I’ve loved it.

Would I do it again? I am doing it again. Andy Steiner’s How To Survive: The Extraordinary Resilience of Ordinary People is due out later in the year.

Mom: Keep your phone on.