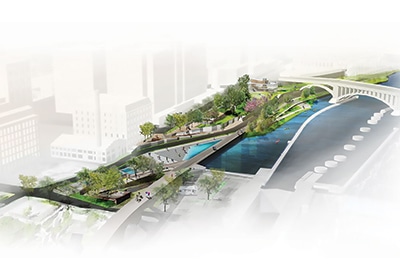 How Green Is My Capital Campaign?

Can two downtown Minneapolis park projects both green up in competition for philanthropic dollars?
By Burl Gilyard
April 11, 2016

Downtown Minneapolis has no parks. Two are in development and competing for corporate and other funder dollars, in an inopportune quirk of timing unlikely to benefit either effort.

Backers of the signature Downtown East Commons are admittedly struggling to raise $22 million for a park near U.S. Bank Stadium. Meanwhile the Minneapolis Parks Foundation is working to raise $15 million for its RiverFirst Initiative, including a north Minneapolis trail link and Water Works (on the drawing board for decades) along the downtown Minneapolis riverfront.

As of late February, the Downtown East campaign had announced $10.5 million in commitments, including money from the Minnesota Vikings, Wells Fargo and Ryan Cos. RiverFirst had raised $9 million, anchored by a $3 million commitment from the General Mills Foundation.

“It’s all good for downtown Minneapolis, and at the end of the day, donors make their own choices about what they want to prioritize,” says Steve Cramer, president and CEO of the Minneapolis Downtown Council. He acknowledges, however, “there’s only so much money to go around.”

Tom Evers, executive director of the Minneapolis Parks Foundation, says that his group has not run into cases where a potential donor was choosing one park project over another, but admits “we’re looking at companies and individuals that are interested in the Minneapolis park system as a whole, and there’s definitely going to be some overlap.” The capital campaigns don’t reflect the full park price tags. Water Works is projected to cost $26.7 million—$13.4 million from donations, $6.3 million from the Minneapolis Parks and Recreation Board and $7.2 million from as-yet-unknown sources.

The city of Minneapolis is slated to acquire the Commons land from Ryan Cos. for $19.8 million. A new conservancy created by the Downtown Council, called Greening Downtown Minneapolis, will manage the park.

Downtown advocates are quick to point out that simultaneous “cultural campaigns” are not uncommon in the Twin Cities philanthropy community, but no one recalls two downtown parks competing for dollars simultaneously.

Concept renderings of what Water Works Park could look like. The project is attempting to raise private and foundation dollars at the same time that Downtown East Commons (the park next to the new U.S. Bank Stadium) is seeking to raise $22 million from many of the same sources.
See all stories by this author >