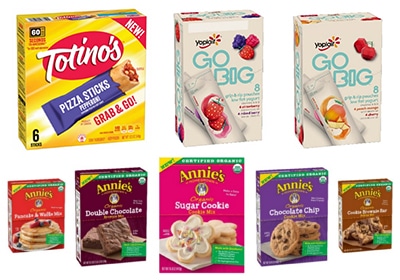 The food company has been using a more direct-to-consumer approach to bring its products to store shelves in less than half the usual time.
July 22, 2016

General Mills said Tuesday morning that it is rolling out about 40 new food items geared toward consumers that are on the go or prefer to eat all organic.

Annie’s, an organic foods brand purchased by General Mills in September 2014, was at the forefront of the launch. An assortment of baking mixes for items like cookies, brownies, pancakes and waffles are set to roll out under the Annie’s name, along with refrigerated dough for cinnamon rolls, crescent rolls, cookies and biscuits.

Other notable new food items include a higher fat content Greek yogurt by Yoplait and Totino’s Pizza Sticks, a spin on its Pizza Roll re-shaped for the on-the-go eater. A slideshow featuring all of General Mills’ new products can be viewed here.

Ken Powell, CEO of General Mills, said the items it has developed reflect a period of rapid change within the food industry. “Consumers are very clear about what they want — simple ingredient lists, free from artificial colors and flavors, free from gluten, less sugar, less sodium, more convenience,” he said. “This translates into a very clear set of growth opportunities for us.”

Ever-evolving consumer demands have pushed General Mills to reorganize its product portfolio over the years, which TCB analyzed in its March cover story. During that time, the company has completely redesigned how it develops and brings new products to market.

“In order to support the growth we’ve planned, we moved toward a more entrepreneurial approach to product development,” said Peter Erickson, vice president of Innovation, Technology and Quality at General Mills. He said the change has allowed for the company to “not only [speed up] innovation, but [help] put our consumers first and deliver exciting, relevant new products that meet consumer needs and drive topline growth.”

One such method the company has taken on involves development teams setting up a table with a new product and interacting with people at cooking schools, farmers markets, fitness centers, grocery stores and other locations. General Mills calls its direct-to-consumer sampling practice “lemonade stands.”

“It’s apparent to us that the closer we get to our consumers, earlier in the development process, the more successful we can be on delivering foods that meet their needs,” Erickson said. “When we fully embrace this spirit, we’ve proven that we can increase our speed to market from 24 months to less than 12 months.”

General Mill’s product unveiling arrived a day ahead of its investor day event where executives and analysts will meet in New York to discuss the company’s fiscal 2017 plans for growth.