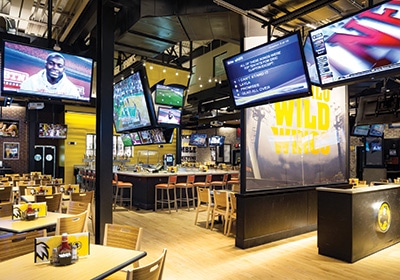 How Buffalo Wild Wings Is Rethinking The Sports Bar

They’re dark, chaotic and loud. Buffalo Wild Wings tries to hit the reset button to become a restaurant that happens to be a sports bar.
May 01, 2014

This year, Minneapolis-based sports-bar chain Buffalo Wild Wings begins a companywide rollout of a next-generation design, in development since 2011, for its new and remodeled restaurants.

The growing chain, with $1.27 billion in 2013 revenue, opened its thousandth North American location in January. The new design, called “stadia,” was used in 13 new-store openings last year. In 2014, all but two of 46 planned openings will follow the stadia template (the pair of outliers were too far into the permitting process with local authorities to change course), explains BWW’s director of store design Bill Ferris.

Ferris also expects many elements of the new design to appear in 20 to 25 remodels of corporate-owned stores this year, and about 40 franchised locations. Two Twin Cities remodels, one in Oakdale, the other on Snelling Avenue in St. Paul, have incorporated the new template, although special constraints would not allow the full stadia treatment. A new store with a more complete stadia design is scheduled to open in late spring at Edina’s Southdale Mall.

(Citing competitive reasons, the company will not reveal build-out costs associated with the old and new design, but henceforth, all new stores, whether corporate-owned or franchised, must adopt the stadia concept.)

Ferris says that no precipitating event or business trend sparked the move to a radical redesign. It simply arose from an ongoing desire to “keep our restaurant appearance fresh,” he says.

Once BWW got into the process, however, one thought led to another. The final new design differs from typical sports bars in some potentially groundbreaking ways. Interior furnishings use lighter colors. Windows above the bar area admit natural light. The acoustics, the audiovisual system and placement of TV screens are designed to make conversations at a normal volume possible at the tables in the dining area, even if there is considerable noise and excitement around the bar.

Can One Space Fit All?

One look at BWW’s redesigned central horseshoe-shaped bar, with its enormous video screens, makes the stadia label easy to understand. But, in fact, two seemingly contradictory priorities led BWW to pursue a design that would work well for different types of customers, even without major sporting events that attract crowds of hard-core fans.

Make no mistake—sports remain central to the marketing strategy, Ferris says, and BWW’s top priority was to “capture the energy” that sports fans have at a stadium event. “We didn’t set out to replicate a stadium experience,” he explains, “but if you can’t go to the stadium, you should be able to go to Buffalo Wild Wings and get similar energy.”

Three Buffalo Wild Wings stores in the Twin Cities feature many elements of the new design.

That suggests ramping up the intensity. The stadia design does exactly that—in the bar area. But a second priority was to calm, quiet and humanize the restaurant section. That goal was driven by the changing demographics of BWW’s customer base and the chain’s desire to be perceived as more than just a sports bar.

“We have seen an increase in family business,” Ferris says, “especially parents coming in with kids who are into sports—Little League and those kinds of things. . . . That’s a growth segment for us. And parents don’t want to feel that they’re taking their kids to a bar.”

Traditionally, sports bars (think Senser’s) have been windowless, darkly furnished and dimly lit, in part because big-screen projection televisions don’t show up well in daylight or normal interior lighting. “Bill [Ferris] and I went to a [Twin Cities] sports bar that was quite dark,” recalls Christian Davies, executive creative director-Americas for Fitch, the global architectural firm, with U.S. headquarters in Columbus, Ohio, which was hired to create BWW’s new design. “I said, ‘I’d never bring my kids here.’ After that we talked a lot about ambiance and what we wanted the space to feel like.”

The issue became how to create a space that would serve as a great place to drink beer and watch sports in a highly social and energetic atmosphere, while providing a comfortable environment for families and kids. For that matter, how about an environment that would attract chicken-wing fanciers even if they were indifferent to the games that might be showing on the television sets?

The challenge boiled down to one of flexibility, Davies says. Spaces within the stores had to be “zoned” to account for three sorts of differences. One he calls “dayparting,” referring to questions such as “How is lunchtime different from dinnertime, and how does the post-dinner experience change?”

He calls the second difference “game-on vs. game-off.” The venue doesn’t just have to appeal to fans during big games; it needs to attract customers 365 days a year. Finally, there are different kinds of guests: “How can you design for families without putting off the hard-core loyalist sports fans?”

Light at the End of the Tunnel

Joseph Dungca, an audiovisual consultant for BWW, says that technological advances now make it feasible to replace most projection-screen setups with flat-screen LED TVs up to about 80 inches. That is what really allowed BWW to rethink the concept of light.

And while they were at it, why not rethink acoustics so that customers in the restaurant area could actually hear each other speak over the echoing music or the television noise?

Ferris, Dungca and Davies are reluctant to criticize other sports bars too harshly; Steven Orfield, president of Orfield Laboratories of Minneapolis, has no such qualms. Orfield Labs is a firm specializing in experience-centered research and design. Basically, “that means we pay attention to human perception,” he says. He served as a consultant and researcher on the BWW design project.

Most Buffalo Wild Wings stores are franchised. Here’s what’s required to become one:

What is wrong with the typical sports bar? Easy, Orfield says: It looks and feels like a dark warehouse with TV sets hanging at random off the walls and ceilings. The audiovisual system is designed with so little thought or skill that there is no table in the place where you can carry on a normal human conversation. Even if the food is good, the only people who want to go there are sports fans—and even they have no desire to be there unless a game of particular interest is on. If a sports fan manages to drag some middle-aged parents or a spouse or a friend to the joint, the guests likely will never return.

It isn’t hard to hang up a giant screen and attract a crowd for a Vikings game, Orfield says. But if that’s where your design awareness stops, “you’ll alienate a far larger market than you will attract.” If you want customers to show up when the big game isn’t on, he says, “the trick is to design a restaurant that happens to be a sports bar, not vice versa.”

BWW’s stadia design pays very close attention to light and noise. Ferris credits Orfield with research demonstrating that interior colors should be much lighter. “It goes against intuitive thinking: You’d think a darker environment would allow the TV screens to pop,” Ferris says. But an analysis found that a lighter background is easier and more pleasant for customers because their eyes don’t have to adjust as much as when they look from a dark background to a bright screen.

As for sound, in BWW’s legacy stores, Ferris says, “everything is open, and we got a lot of reverberation in the space. In the new design, we hung acoustical material from the roof structure that cuts down reverb.” Now, instead of sounds merging into “acoustical mud,” people can have conversations and also hear the game without the sounds blending. “It’s a much more pleasant environment acoustically,” he notes.

It’s hard not to interpret many of the changes as a play to female customers, who make most household dining decisions and typically deliver the veto in a sports bar debate, but Ferris says not so: “Our goal was to enhance the Buffalo Wild Wings experience for all of our guests.

Franchisees, who own about 56 percent of all Buffalo Wild Wings stores, have almost unanimously embraced the new design, Ferris says. (Nonetheless, the company would not allow a franchisee to be interviewed by TCB.) The company surely hopes so, as franchisees have to bet their own money on it. Like corporate stores, “our franchisees are obligated to remodel on a periodic basis,” he says. “They are not required to go back and remodel stores to the stadia design, but when they do remodel, they must meet the design standards for stadia.”

Initial research has found customers to be “very positive” about the new design, Ferris says.

Orfield sees the whole project as a bright exception that proves a gloomy rule about design: “Nobody pays attention to human perception,” he complains. “And science is almost never done in architecture.”

1. SCREENS LED technology allows removal of projection TVs, which are not compatible with high levels of natural light.

3. COLOR Furnishings and wall colors/materials are lighter, resulting in a space that appeals to a broader variety of customers.

5. LIGHTING Skylights let in natural light and overall light levels increase in stadia-design stores. Both sports viewers and other customers preferred the effect, the company says.