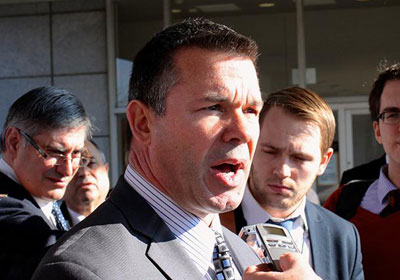 How A Transportation Deal Didn’t Get Done At The Legislature

GOP Rep. Tim Kelly thought he had a workable plan to solve Minnesota's long-term transportation-funding crisis. So why didn't it even come up for a vote?
June 05, 2016

It was Saturday, May 21 — the day before Minnesota lawmakers were required to finish their work for the year — when Rep. Tim Kelly went a little rogue.

He called a joint meeting of the House and Senate members who’d worked for nearly two years to create a long-term transportation-funding package. Negotiations between top legislative leaders had yet to produce a deal, but Kelly, chair of the Republican House’s transportation committee, had an offer for Senate Democrats he thought could break the deadlock.

There was one complication: Kelly’s own Republican leadership didn’t back the plan.

In the end, it didn’t matter. On Sunday night, to break the impasse, lawmakers agreed to a last-minute deal that would have spent one-time cash and a portion of the bonding bill on transportation projects. But Democrats — furious the new deal didn’t include money for public transit — tacked on an amendment with minutes to go before the session’s midnight deadline. Instead of taking up the bill, House Republicans simply adjourned for the year.

The meltdown wasn’t a complete shock, given how far apart House Republicans and Senate Democrats had been for most of the 10-week session. But it was still a messy and frustrating outcome, for lawmakers as well as voters  — and for Kelly more than most. A Republican representative from Red Wing who had worked to create a transportation package for two years, Kelly not only had a front row seat to the entire debate — from its hopeful beginnings in 2015 to its implosion in the final hours of session this year — he was also convinced he had a plan that could actually pass the Legislature.

“There was so much in that bill,” Kelly says. “I am really at a loss as to why we stepped away from that.”

The $600 million question
Kelly became chair of the House Transportation Policy and Finance Committee after Republicans reclaimed the majority in the 2014 election. Having never served on any transportation committees before, Kelly was picked because of his reputation for working well with Democrats, which would be key to forging any long-term agreement on the issue. Transportation deals are never easy to come by, and in order to pass they require a coalition of labor, business and other groups, many with disparate interests.

As Kelly says: “The reason they tapped me to be the chair was because it was a situation where you have to sit down with the other side and engage.”

At the time, differences between the newly installed House Republican majority and Democrats in control of the Senate were massive. The DFLers wanted to raise gas taxes to pay for roads and bridges and a metro-area sales tax increase to pay for mass transit. Republicans didn’t want to raise the gas tax at all, and most members were ideologically opposed to light rail, a key element of transit plans for the metro.

Kelly and his counterpart in the other chamber, Sen. Scott Dibble, DFL-Minneapolis, met throughout the 2015 session, but the differences were too great to solve in the midst of a year when the Legislature would be setting the state’s budget for the next biennium. In the end, legislative leaders decided the transportation funding question could wait. They’d take up crafting a long-term solution in 2016.

But that never really happened. For the majority of the 2016 session, the two sides mostly reiterated the arguments they made the year before, positioning themselves for the end-of-session negotiations. The only thing everyone involved managed to agree on was a number: They wanted to put $600 million into roads and bridges each year for the next decade.

Then, with only one week left in session, Gov. Mark Dayton decided to intervene. He offered two options for legislators to consider in raising money for roads and bridges: one with a gas tax increase and one that relied heavily on license tab fee increases instead.

The next day, Republican leadership responded with their own plan. It also relied on license tab fee increases, though far less than Dayton's plan. The deal also shifted $300 million from a projected budget surplus into a new road and bridge account to pay for projects and used bonding dollars to hit the $600 million mark.

The plan didn’t, however, include any funding for transit. House Speaker Kurt Daudt said the lawmakers would take up transit funding after a plan for roads was figured out.

Behind the scenes, Kelly was also working, preparing a final package that would incorporate all the things Republicans wanted — but also an offer on transit for Democrats. “We didn’t talk about transit at that press conference, but I was already preparing our offer,” Kelly says.

Among other things, his plan would raise license tab fees to raise $100 million, plus funnel $300 million more in state funding to roads and bridges each year, which has long been a priority for Republicans. But it also got the state “out of the business of building and operating trains,” by allowing five metro-area counties to raise a quarter-cent sales tax to pay for transit projects in the future. Instead of having the state periodically dole out funds for new transit projects (and periodically fight about it), the metro area could take care of the costs by raising their own taxes. “That’s a savings of $750 million over the next 10 years,” for the state, Kelly says.

As part of the deal, Republicans would also score several changes to the Metropolitan Council, the regional planning agency that has long been in the sights of the party’s conservatives. Among other things, the council, whose members are now appointed by the governor, would have staggered terms under Kelly’s plan, and have to be vetted by a group of local elected officials.

“There were just so many wins for us in this bill,” Kelly says.

One-time plan emerges
But support eroded for any comprehensive deal, Kelly thinks, when the option for one-time funding for transportation entered into end-of-session discussions.

In the final weekend of the session, top legislative leaders shuffled in and out of meetings, trying to strike deals on everything from a supplemental budget bill and tax cuts to bonding. But transportation remained the major sticking point, until whispers started of a possible compromise that would only fund roads and bridges for one year.

The idea was to spend about $275 million in one-time cash on specific road and bridge projects and about $300 million in a $1 billion bonding bill for transportation projects. That wouldn’t satisfy those who wanted a long-term plan, but it would put some money into roads and bridges immediately without raising any taxes or fees, particularly important in a year when all 201 seats in the Legislature are on the ballot. And it left out the controversial transit piece.

“That ended up being the discussion,” for lawmakers considering the deal, says Kelly. “Am I going to take a look at the local option tax increase or am I going to throw one-time money at the problem and claim I never raised taxes?”

Kelly had a lot of problems with the one-time funding deal, particularly the fact that lawmakers used earmarks to designate certain road projects for funding. “We are supposed to let [the Minnesota Department of Transportation] do that,” he said. “When lawmakers start believing they are better engineers and they know better to put a whole transportation plan together, that’s a slippery slope.”

Negotiate in ‘good faith’
With the focus shifted to a one-time plan, a frustrated Kelly wanted to at least make sure staff and legislators on his committee got some credit for all the work they did in coming up with a long-term transportation deal.

So he scheduled a joint House-Senate transportation hearing and planned to present his plan in front of the committee — with transit included. He made sure to let House leadership know what he was about to do, so they wouldn’t be surprised. “If a decision was made after that to go a different direction, that was on leadership, but not on my staff who worked and negotiated in good faith,” he says. (Daudt said he did not want to comment on Kelly’s actions.)

Members of the committee were supportive. Dibble said it represented “significant” movement toward a deal. Rep. Ron Erhardt, DFL-Edina, said members should pass it and get it to the governor’s desk the next day. “I think we should whiz bang this through and see what happens,” he said.

But Kelly’s plan never made it to the House floor. Instead, the one-time funding plan was put forward — the provision that eventually led to the dramatic end of session. With minutes to go before a midnight deadline, Democrats in the Senate, furious the new deal didn’t include funding for transit, tacked an amendment on to the bill. Rather than take it up, the House decided to go home.

Still hoping to get a deal done
Kelly hopes that Dayton will call lawmakers back into a one-day special session to take up transportation and bonding again. If that happens, he wants to be part of the conversation. Kelly, who has served in the House since 2008, is retiring from politics, and he’d like to get some long-term funding in place before his term officially ends.

His transportation plan could get the backing of Democrats in the Senate and the signature of the governor, he says. And before the one-time funding option emerged, it was also gaining support from some members of his caucus. Whether House GOP leadership torpedoed his plan, Kelly wouldn’t say. “They have a job to do, and in the end they get to make the decisions,” he said. “I was disappointed, yes, but I wouldn’t say anything to disrespect our leadership.”

With a little time away from session, Kelly thinks legislators could revive his proposal and use it as a base to try and get long-term deal done.

“I think there’s still an opportunity, and I will be involved if that arises,” Kelly said. “When we step back, you have to look at what’s best for the entire state of Minnesota. That’s when it’s hard to step back as a representative of a single district.”