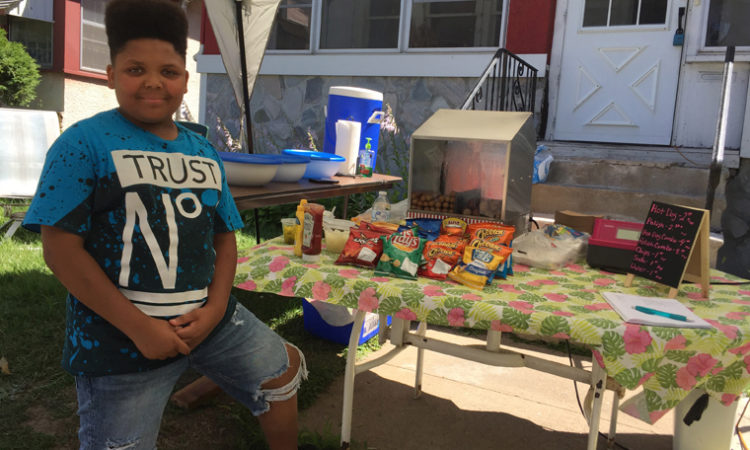 One generation’s junk became another’s treasure when middle-schooler Jaequan Faulkner spotted an old food warmer in his uncle’s basement and decided to use it to sell hot dogs.

That was in 2016. Two years later, the now 13-year-old is running a formally permitted business backed by several entities within his Northside community and beyond. Monday marked the first day of legal operation for the business, dubbed “Faulkner’s Old-Fashioned Hot Dogs.”

Jaequan has been selling hot dogs from the front lawn of his home on Penn Avenue North in Minneapolis’ Northside neighborhood about five days a week for approximately a month. Jaequan’s uncle Jerome Faulkner warned him from the start that one day the city would likely confront them given the health-based restrictions on selling food.

That day came last week. However, instead of getting shut down, Jaequan wound up with business partners.

“NEON [the Northside Economic Opportunity Network] came and told us about a complaint… When they pulled up I said ‘dang, why does the city always have to be the bad guy,’” recalls Jaequan. “But then they said, ‘we’ll tell you everything you need to have,’ and I was like, ‘dang, the city is not always the bad guys.’”

A couple of complaints, one from a city transit employee over food dangerously sitting in the heat, could have spelled the end of Jaequan’s hot dog business. Instead, the Minneapolis Environmental Health department had other plans.

“We definitely didn’t want to just shut it down,” says Daniel Huff, director of the Minneapolis Environmental Health department. “We always want to help people get the right permit, we want people to be successful.”

“Jaequan is a great student. Whenever I come to the door he always has a smile on his face and is excited to learn [about the process],” says Krick. 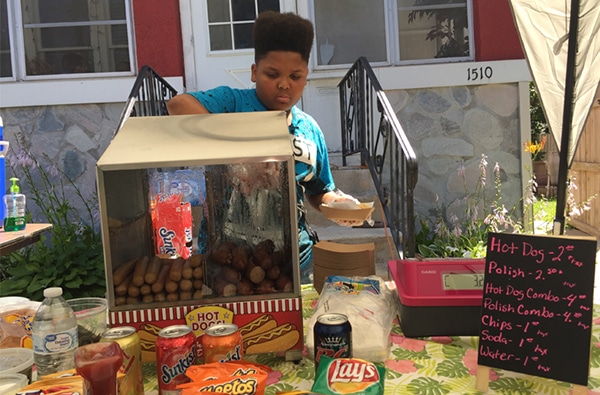 Jaequan says he was a little confused by why he needed both a license and permit, but he was happy to do what was necessary to be legitimate.

“A permit helps me stay open, lets other people know I’m officially ready to take care of business,” says Jaequan. “I’m letting this grow out, I’m letting everybody know that I can do this.”

However, before the complaint that even started all this, Jaequan almost gave up the business instead.

Jaequan will sell his hot dogs – he also sells Polish hot dogs, chips and beverages – at his home for the 10 days allotted by city regulations. He’ll then move the operation to the Minneapolis Police Department’s 4th Precinct, which is sponsoring his next permit.

“This seemed like a great opportunity for all of us,” says the precinct’s Inspector Aaron Biard, of their involvement. “It’s something positive that we can do for the kid and helps us too. It’s good for the officers to interact with the young man, buy his hot dogs and be part of that experience.”

Jaequan has similar arrangements with the Urban League and Sanctuary Covenant Church.

If it were up to Jaequan, he’d sell his hot dogs eight hours a day, but he can’t because, as he notes with light-hearted frustration, that’s a violation of child labor laws. Instead, he’s accepted a limit of four hours a day, and Jerome notes when school comes, Jaequan will have to work around the time he needs to succeed academically.

After all, Jaequan, who’ll enter his third year at Sojourner Truth Academy this fall, has plans to go to college and eventually become an architect. But for now, he’s deeply invested in Faulkner’s Old-Fashioned Hot Dogs, with plans to possibly buy a cart for 2019.

“If you enjoy something, don’t give up on it,” says Jaequan. “If I would have given up again, I don’t think I would’ve been where I am now.”