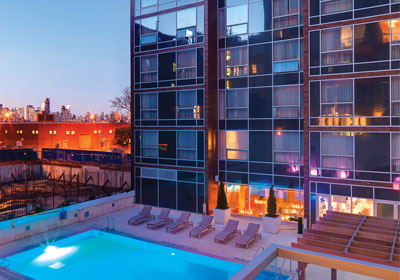 “We had never intended to sell the property,” says Ben Graves, company president. “But New York is a totally different kind of market; there is just so much money flying around.” Not long after opening, Graves received three successive offers for the Williamsburg complex, which includes a condo residence and separate hotel (with shared amenities). Offer number three was “one we couldn’t pass up. We have partners and we had to do right by them.”

Speculation is the project sold for more than double its $70 million development cost. The buyer, who at press time had missed a closing date, has not been identified but is believed to be King & Grove, an trendy upstart hotelier composed of executive castoffs from Ian Schrager’s legendary hospitality empire.

So Graves is operating the property in a state of suspended animation, featuring a closed restaurant, silenced publicists, and minimally functional website. But he is convinced the buyers will perform: “There is a lot of earnest money on the table.”

Graves has two other hotels in development in New York City—another in Brooklyn and one on 18th Street in Chelsea—but its next venture to open will be a boutique hotel/villa development in Costa Rica, scheduled for 2013.