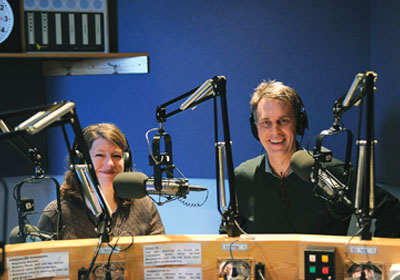 Two print journalists make the jump to radio—and get up close and personal with unnerving subject matter.
By Katie Westfall
February 01, 2010

Radio documentaries typically take on challenging topics. Take “Death’s Footprint,” a 30-minute radio documentary broadcast on Chicago Public Radio about people who are choosing certain “disposition” processes for departed loved ones based on environmental impact. (Which has the lesser impact: dissolving a body in a chemical bath or cremation?)

The documentary was produced by journalists Todd Melby and Diane Richard, senior producers for 2 Below Zero, an independent, Minneapolis-based radio-production company that makes strong subjects accessible with empathetic and sometimes humorous storytelling. The husband-and-wife team has been producing radio essays and documentaries since 1999, beginning with five-minute essays for “The Savvy Traveler” public radio program.

They got a big break in 2003, when they learned that Chicago Public Radio was seeking half-hour stories on topics relating to sexuality. They took what was originally a two-part print article on sex and aging that Richard wrote and parlayed that into their first radio documentary, “Spirit and Body Willing: Sex Over Age 70.” That piece earned 2 Below Zero the Edward R. Murrow Award from the Radio-Television News Directors Association for best large-market documentary in 2004. They earned the same Murrow again in 2009, along with a Public Radio News Directors Award, for “Death’s Footprint.”

But awards typically don’t pay the bills. Public radio stations have tight budgets, and stations are pushing for more multimedia content, particularly on line. That led 2 Below Zero to incorporate as a 501(c)3 nonprofit in 2007, which allows Richard and Melby to seek grants from individuals, foundations, and other organizations for support.

The 501(c)3 route isn’t a panacea. It requires Richard and Melby to not only produce their work but also solicit funding, work with a board of directors, and stay on top of Internal Revenue Service paperwork.

Funds are coming in. A grant from the Illinois-based Fund for Investigative Journalism is helping 2 Below Zero develop its newest documentary, “No Brother of Mine.” For four years, Melby and Richard have researched sex offender policies, such as civil commitment and residency requirements, and “whether or not those laws really help prevent future sex crimes,” Melby says. They’ve been following four male sex offenders before and after their release from prison.

2 Below Zero offers its documentaries on its Web site; listeners can subscribe to podcasts on iTunes. It also belongs to the Public Radio Exchange, which allows directors from around the country to access independent producers’ work.