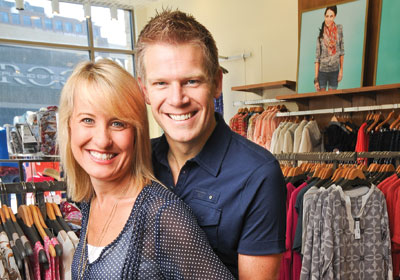 Megan Tamte went from post-partum retail frustration to 30 stores in 11 states in less than a decade—one hot mom at a time.
By Suzy Frisch
June 01, 2012

It took one eye-opening and miserable shopping trip right after the birth of her first baby for Megan Tamte to create her blueprint for a new kind of store. With her 3-week-old daughter in tow, Tamte took her maiden voyage as a new mom out into the world. All she wanted was a few new pieces of clothing to dress her post-pregnancy body and start feeling good about her looks again.

But things didn’t go so well. Tamte struggled to push the stroller through the narrow aisles of the department store. There was too much merchandise to sift through; the baby got fussy and Tamte had to find the bathroom to feed her. She knew she had only a limited window before she needed to take her daughter home. Tamte grabbed a few items and headed to the dressing room, only to find that nothing much fit her transformed body. The pretty young saleswoman tried to help by bringing larger sizes and different shirts, but nothing worked.

“I had the idea that there needed to be a store that catered to the young mom with little kids. There really wasn’t a place to shop that understood my needs and could help me with a sense of style within the great big job of motherhood,” says Tamte. “I thought of the term ‘hot mama’ and believed in the deeper level of the idea—that a hot mama loves being a mom fiercely, but she takes time for herself and doesn’t forget who she is in the midst of motherhood.”

A Store Is Born

It took several years for Tamte to fully gestate the idea and give it life. But since she and her husband, Michael, birthed the first Hot Mama store in 2004, they have raised a flourishing bundle of joy. The company is about to open its 30th store this month, and has outlets in 11 states that brought in $22 million in revenue in 2011. Now Hot Mama is on a two-part mission: to grow to 100 stores by 2016 and generate $100 million in revenues.

Hot Mama consistently has focused on serving busy women with a curated palette of fashion-forward clothing. Their stores target women ages 25-55, arming them with high-touch stylists who help find apparel to suit the shopper’s body type and fashion sensibilities. The stores offer a casual-chic wardrobe suitable for work events or the playground.

“What we realized is that moms are usually in a hurry—they’re busy taking care of their kids. And moms, too, sometimes forget about themselves and forget to think about fashion and trends,” says Megan Tamte, who holds the title of CEO. “Our job is to help women look and feel hot.”

The Tamtes always intended to grow Hot Mama into a national chain. Ever since it opened its 10th store in 2007, Hot Mama has fueled each new store with profits from existing ones. The company is on track to hit $33 million for the 2012 fiscal year ending October 31, says Michael Tamte, chairman and CFO.

Hot Mama has averaged a companywide 60 percent increase in revenue year over year.) The one exception was 2009, at the height of the recession; that year, revenue grew in single digits.) At its current rate, Hot Mama should easily accomplish its goal, he says.

One key to Hot Mama’s success is the universality of its concept, which has translated well from Minnesota to the 10 other states where it operates. It’s an indication to Megan Tamte that she struck a chord.

“What we find is that the lifestyle of a mom is the same wherever we go, whether it’s Chicago or Minnesota or Portland, Oregon,” she notes. “We fundamentally found that a lot of moms need help and want to shop, but they want to shop at a place where they can shop quickly and dare to try a trend.”

That focus on a specialized segment is one reason Hot Mama thrives despite a still-depressed women’s retail segment. Since the recession, moms have spent their shopping money on their kids and partners, though that is slowly changing, says Marshal Cohen, chief retail analyst at the NPD Group, a consumer market research firm.

Hot Mama is benefitting from a trend toward specialization. “The consumer has gotten to the point where they recognize ‘I need a store that caters to my specific needs and desires,’” says Cohen. “Hot Mama is saying, ‘Here is a niche market that needs attention and needs some coaxing to spend, and here’s the environment to do it. You are allowed to be hot and be a mom and still care about how you look.’”

That was entirely the point when Tamte created the Hot Mama business model. A teacher, she grew up in Chicago’s North Shore suburbs with an eye toward fashion, and became convinced there were plenty of other women who shared her post-baby shopping blues.

Michael Tamte, an accountant, challenged his wife to create a business plan. With his background, he fleshed out the financial picture for the Hot Mama concept. When the Tamtes moved from California back to Michael’s home state of Minnesota, they decided it was time to give it a go. And then, kismet: a retail space opened up at 50th and France, their ideal location. (Hot Mama favors first-ring suburbs and areas with plenty of young families.)

After raising a quarter-million dollars from family and friends, as well as taking out an SBA loan, the Tamtes opened the first Hot Mama in November 2004. They stocked it with premium denim and fashionable tops, and hoped for the best. Thanks to word-of-mouth and a great location, the store hit its sales numbers that first month. (They were admittedly conservative, says Michael Tamte, but still.) Hot Mama continued to make its projections for the first six months. Tamte quit his job as an accountant and joined the company full time.

The Tamtes planned to open a second location in short order, as long as the first Hot Mama took off. In August 2005 Hot Mama opened its second shop at the Arbor Lakes shopping district in Maple Grove, funding the expansion with a loan on the Tamtes’ Edina home.

Hallmarks of the first Hot Mamas still echo in its shops today. They include wide aisles for pushing a stroller around the store and a central living room, complete with a soft couch. Children can watch a movie or play with trains, games, or toys while Mom tries on clothes. Happy kids equal time to pick clothes and make purchases.

Coming to a City Near You

Hot Mama has grown rapidly from the start, thanks to strong same-store sales. This spring, in a two-and-a-half month period, Hot Mama opened eight stores and moved one of its existing Illinois stores to a new location. This expansion stretches the chain from Oregon to Ohio, with most Midwest states represented in between.

For now, Hot Mama intends to stay centered in the Midwest and above the Mason-Dixon line, focused on markets with four seasons. In 2013 the company will open in a major East Coast city (but not New York), and by 2014 Hot Mama will pursue markets in the South. “Going to a two-season market just adds complexity we don’t need,” says Michael Tamte. “In the next few years we will fill holes in the Midwest and cluster stores together.”

After all, it takes about two years for customers in new markets to discover Hot Mama. Once shoppers in a metro area prefer the brand, the company capitalizes on that name recognition by adding more locations. However, staffing the new markets with store leadership has been Hot Mama’s biggest challenge, the Tamtes say. Their solution has been to ask Hot Mama managers to relocate to open stores in new cities.

Hot Mama’s apparel has traditionally focused on premium denim brands like James Jeans, 7 For All Mankind, AG, and Hudson, and fun tops and dresses from 150 designers. This diversity of lines reflects customers’ penchant for variety. Currently, the store is shifting its merchandising to focus on four distinct styles: casual chic, sophisticated, preppy, and trendy—again reflecting customers’ sensibilities.

“We’re not trying to go after the same customers as everyone else, and [carrying such a diverse array of goods] makes the store more complicated and so much more fun,” says Klockars. “We talk a lot about interpreting trends for moms and finding what customers can relate to so they don’t feel silly or like they are wearing a costume.”

Another place that Hot Mama stands out is its use of its sales staff as stylists. The sales force is trained to talk with customers about their favored style and body type. Then they help women shop the store and pull items that suit their needs and tastes.

It’s this personalized attention that draws Kari Fronius of Chaska to shop at Hot Mama each season. The mom of two school-age kids, Fronius knows that when she visits Hot Mama she’ll get informed assistance from a stylist who helps her find great clothes and get her shopping done efficiently.

“They are amazing; they totally shop with you,” says Fronius, who popped into the Edina store one recent weekday to shop for spring clothes. “There is not another store like it, where they go and pull things for you and get it right. That’s why I come here. They get it right.”

The feeling that customers get—that Hot Mama understands them—contributes to its success, notes analyst Cohen. “They are speaking directly to the consumer in a language they want to hear and aren’t used to: as a woman and as a mom,” he says. “They are putting so much energy into their kids, and they want to feel wanted and pampered. Retailers that can make them feel special have the secret formula.”

That’s what Megan Tamte believed all along. “To me, a hot mama knows that to be a good mom she has to take care of herself,” she says. “There is meaning and purpose to what we’re doing besides selling clothes to women.”

Suzy Frisch is a frequent contributor to Twin Cities Business.