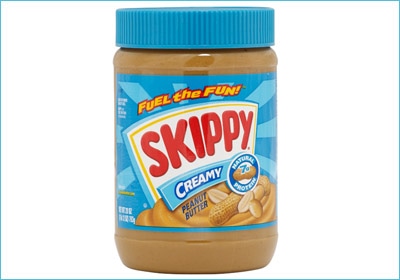 Annual sales for Skippy, the second-largest U.S. peanut butter brand, are expected to total about $370 million in 2013, with $100 million coming from outside of the United States.
January 13, 2013

“The acquisition of the Skippy peanut butter business represents a significant opportunity for Hormel Foods,” Hormel Chairman, President, and CEO Jeffrey Ettinger said in a prepared statement. “It allows us to grow our branded presence in the center of the store with a non-meat protein product and it reinforces our balanced portfolio.”

The Skippy peanut butter domestic line consists of 11 varieties of shelf-stable peanut butter products. Annual sales are expected to reach $370 million in 2013, with nearly $100 million coming from outside of the United States.

Peanut butter, meanwhile, is a $2 billion business, with 74 percent of American households buying it—and peanut butter is the second-most popular sandwich in the United States behind ham.

Skippy, first introduced in 1932, is the second-largest U.S. peanut butter brand behind J.M. Smucker Company’s Jif brand. Skippy is sold in more than 30 countries on five continents, and Hormel said that it’s the leading brand in China.

Ettinger said that Skippy’s growing international line will strengthen Hormel’s global presence and “should be a useful complement to our sales strategy in China for the Spam family of products.”

Hormel said that Skippy is expected to “modestly” increase profits in the current fiscal year and will add 13 to 17 cents per share in 2014.

According to Unilever, the transaction includes its Skippy manufacturing facilities in Little Rock, Arkansas, and China’s Shandong province. The deal is subject to regulatory approval and other customary closing conditions, and Unilever said it’s expected to conclude in early 2013.

Following Hormel’s announcement about the Skippy acquisition, reported to be its largest to date, shares of its stock were trading up 3.3 percent at $33.07 mid-Thursday afternoon.

In November, Hormel—one of Minnesota’s 15-largest public companies based on revenue—reported record annual sales and profits for the fiscal year that ended in October. Net earnings totaled $500.1 million, up 5 percent from the prior year, on sales of $8.2 billion, up 4 percent. Meanwhile, fourth-quarter net earnings totaled $132.6 million, or 49 cents per share, up from $117.3 million, or 43 cents per share, during the same quarter the previous year; sales for the quarter rose 3 percent to total $2.2 billion.

Ettinger, who joined Hormel in 1989 and became CEO in 2005, was recognized in September as one of four winners of the 2012 “Responsible CEO of the Year” award, presented annually by Corporate Responsibility magazine.