Bill Cooper became CEO of a troubled bank and made TCF profitable by being both innovative and conservative.
April 01, 2020 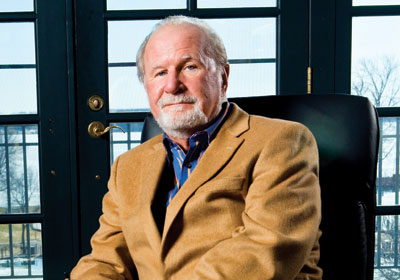 It might seem strange that Bill Cooper, the chairman and CEO of Wayzata-based bank holding company TCF Financial Corporation, has won a major award as an entrepreneur. (He has also been inducted into Twin Cities Business' Minnesota Business Hall of Fame.)

True, he didn’t found TCF. But if the term “entrepreneur” can include—as it should—not only those who start new businesses but reinvent established ones so that they may succeed in a profoundly changed industry, then Cooper is a consummate example. And in a sense, he has been a serial entrepreneur, albeit with the same company.

Cooper started his career by reinventing himself. It’s a story that many in the Twin Cities business community know: a fatherless, academically underachieving Detroit kid whose life was turned around early by teachers who guided him toward the path of achievement. After serving four years on the Detroit police force, the enterprising young man earned a degree in accounting in 1965, and soon entered the banking industry. In 1985, after executive posts with Michigan and Ohio banks, Cooper was named CEO of TCF Bank.

Longtime Minnesotans remember TCF when it was Twin City Federal, a savings and loan institution that had been around since the 1920s. They might also remember that by the early 1980s, the thrift industry found itself drowning in debt, the product of bad loans and unwise investments. Some, like Midwest Federal, went under. Others, like TCF, turned themselves into banks.

But that didn’t mean TCF had reached safe shores. In taking on the top job at TCF, Cooper faced numerous challenges. Interest rates were breathtakingly high, which meant that TCF was paying depositors a lot while earning less on loans. In addition, the bank had more than $1 billion in bad loans.

Cooper responded aggressively, cutting costs, shedding excess management, and reducing the number of troubled loans. He also refocused TCF in a way that didn’t stray far from its roots as a savings and loan: as a bank for small depositors. TCF introduced “Totally Free Checking,” attracting thousands of new accounts. That brought in more income and an inexpensive way to finance more loans. Cooper also expanded hours and opened branches in supermarkets.

What’s more, TCF has eschewed glittering financial trinkets such as subprime mortgages that would attract and bring low many other larger bank systems. As Cooper told Twin Cities Business last year, “We’re kind of a 1950s bank. We take deposits from lots of people, and we make loans to people who we think will pay them back.”

The transformation of TCF from a financial institution stuck in the mud of the past into a market- forward but solidly rooted bank worked. By 1993, TCF claimed 18 percent of the Minnesota consumer banking market, up from the 8 percent it had held when Cooper became CEO. Not only that, but TCF began to move beyond its Twin Cities territory, spreading across the Upper Midwest and even into the tough Chicago market. In 1986, TCF became a public company. In 1997, it launched a leasing business, which has grown into a $3 billion division.

Cooper retired as TCF’s CEO in 2006, remaining as chairman. Two years later, he returned to the chief executive’s office at the board’s request. Though TCF had avoided problematic loans and assets, its bottom line and stock price were being challenged by the financial crisis and the attendant economic slump, particularly its effect on the housing market. Cooper and his management team responded by growing national niche lending businesses—financing leasing and equipment, business inventory, and car purchases. TCF also has expanded into Colorado and Arizona.

You could say that Bill Cooper has taught an old thrift new tricks.