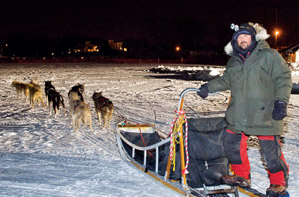 Sales associates for the Maple Grove–based pharmaceutical company Upsher-Smith Laboratories gathered in January 2009 from around the country for a real taste of Minnesota winter. Their annual team-building event was held outdoors in -10 degree temperatures on the shore of Lake Minnetonka.

“What they wanted to do was feature Minnesota—what it’s like in the wintertime—especially for people from the South,” says Michael Jensen, sales manager at the BayView Event Center in Excelsior. Upsher requested that the event include the lake and outdoor activities.

As people arrived for the event, they were greeted by actors from Troupe America playing Ole and Lena, who ushered attendees in while speaking “Minnesotan” and telling jokes. About 100 two- and three-foot tall ice luminaries carved from lake ice lined the path to the area in back of the event center where a winter wonderland was laid out: 23 Christmas trees strung with thousands of twinkle lights on the lake, three roaring bonfires, a warming-house tent, and team-building activities.

People were free to try whichever activities caught their fancy. Two stadium lights from United Rentals were used to light the area. Attendees bowled on the ice with rubber balls and played ice pool by trying to sink broomballs into pockets drilled into the ice. They could also play boot hockey, which is hockey played with boots rather than skates. The 20-by-30-foot heated tent allowed attendees to warm up right on the lake with hot cocoa, mulled cider, coffee, and beer.

And of course, there was ice fishing. Experts from Minnetonka-based fishing-guide company Pike Dreams taught the uninitiated the finer points of the sport and provided fishing poles, bait, and holes drilled in the ice.

The highlight for many attendees was trying their hand at mushing with a real dogsled team. Suomi Hills Kennels, a dog-sled tour company based in Deer River, created a circuit and took the amateur mushers for a ride, even teaching them how to set the brake on the sled.

Staying warm was obviously a huge concern—especially for people who came from warmer locales. Upsher provided hats, scarves, and mittens for attendees and donated them to a charity after the event. Attendees who preferred the indoors could also hang out in the event center’s cottage-themed restaurant and play Nintendo Wii, board games, or card games.

A buffet dinner was served inside after a brief welcome presentation by Upsher-Smith’s president and a skit by “Ole and Lena.” Jensen says that the dÃ©cor was minimal but seasonal. The main dining area has a 20-foot fireplace, and the room was decorated with Christmas trees. Buffet centerpieces included candles with birch and red dogwood branches.

Those willing to brave the cold headed outside for dessert—s’mores around the campfire. The traditional chocolate, marshmallow, and graham cracker treat was offered along with unusual toppings such as raspberries, caramel, crÃ¨me freche, blueberries, and nuts. Fruit chocolate fondue was available inside for those who wanted to stay warm.