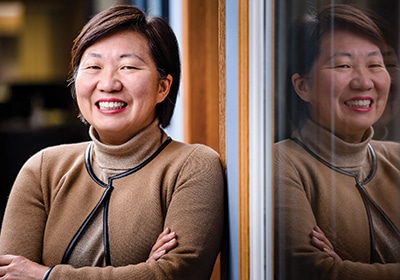 Susan Park Rani readily admits that it wasn’t easy opening her company in 1993 in a male-dominated industry. Being a woman of color made it even more difficult.

As a woman- and minority-owned startup, Rani Engineering was eligible for state and federal programs, but Park Rani never imagined how difficult it was going to be. “You were considered incompetent—but for a government program, you wouldn’t exist,” says Park Rani, who came to the United States from South Korea when she was a child. “A lot of skeptical people in town were waiting for us to fail.”

Recently, her Minneapolis-based firm grossed more than $5 million a year—about 40 percent from the private sector—and her expertise in engineering, business and cultural knowledge is in high demand.

This winter, her business is facing financial challenges. “The freight rail sector work we do is down, driven by low oil prices,” Rani says, so less crude oil is being moved by rail. “We’ve had layoffs in order to manage to our revenue expectations. Our team is redirecting our marketing efforts to water resources, transportation and land surveying.”

“Susan is a collaborative and very strong leader. Because of that, she is highly sought out,” says Minnesota Lt. Gov. Tina Smith. “She is getting the recognition she deserves, which is the result of her many years of building relationships across various communities.”

Over the past several years, Park Rani has become a prominent business leader. She accompanied Gov. Mark Dayton and Smith on a trade mission to South Korea in 2011. In 2013, Dayton appointed her and Smith to the eight-member board overseeing the Mayo Clinic’s $5.6 billion Destination Medical Center expansion in Rochester. This past fall, Park Rani was named to the University of Minnesota Foundation Board of Trustees, the Super Bowl 2018 Host Committee and a committee seeking to bring the 2023 World’s Fair to the Twin Cities.

She is “a person in constant motion,” says David Oxley, executive director of the American Council of Engineering Companies of Minnesota. “She has been active with both woman-owned and minority-owned engineering firms to try to promote them and help them be successful.”

Park Rani attributes her success to perseverance, her knowledge about potential engineering projects around the world, and her work ethic.

What was your first experience as a leader?

As a project manager, I was on an Air Force base in a room with three subcontracting firms and 20 brass—people of rank, sergeants and colonels. I had to quickly think through who was going to do what and divide up the work. I didn’t think I could do it, but it worked like a dream.

What was your hardest lesson in work or life?

What is your best habit in work or life?

Keep working and persevering. If something is difficult, break it into manageable pieces.