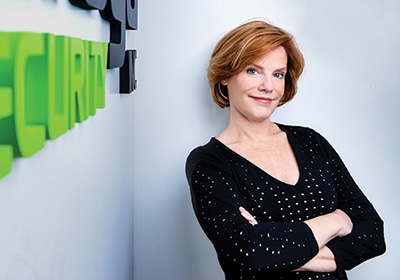 Early in her career, Jill Lloyd learned how to hustle, a skill that proved invaluable in 2002, when she founded Lloyd Security.

“I started in sales at a time when not everyone had a cell phone (called a car phone back then). No one had email. We looked people’s numbers up in the phone book,” says Lloyd. “We couldn’t send contracts electronically. We had to hustle.”

Her goal for the startup was to secure 1,000 customers so the company would have enough momentum and cash flow to grow at a faster pace. Lloyd’s first employee, Tim Bauman, who is still with the firm, would install the security systems, and Lloyd would design and sell them. “It was brutal, but we basically outworked our lack of cash,” she recalls.

In 2015, Lloyd Security grossed $2.5 million, and revenue grew by 122 percent between 2013 and 2014. “I bootstrapped the entire venture,” she recalls. “I took a loan from myself and started the company slowly. Thirteen years later, looking in the rear-view mirror, we have no debt. We have been conditioned to be frugal and smart with money.”

Lloyd uses her drive and business sense to help others succeed as well. “I love helping women think bigger. I used to think small. Years ago if someone had said, ‘You will have a $2.5 million company with 18 employees,’ I would have disagreed with them.” She calls that type of thinking “solo-preneurial,” where someone starts a business to make a solo living, in contrast to “entrepreneurial thinking,” which has a bigger goal of building a multi-employee firm.

Lloyd is a member of two groups to help women grow their businesses, the National Association of Women Business Owners and the Women Presidents’ Organization.

“Women have a lot of responsibilities,” she says. “We are the primary caretakers of children and family, which can be challenging when running a business. We have to get focused. And we have to be fearless.” Lloyd admits, however, that succeeding in business often has its trade-offs.

“Some mornings I wake up and ask myself, ‘Who needs me more today, my family or my business?’ Based on the day, I follow what is most urgent. I always try to prioritize family activities and special events in addition to making sure I carve out special time with each of my children,” she says. “Balance is about making the best choice on how to divide my time between the important things.”

C. J. DubÃ©, who has been Lloyd’s Traction EOS (entrepreneurial operating system) implementor for the past two years, calls Lloyd a visionary. “Jill doesn’t know the definition of quit,” says DubÃ©. “If she sees a roadblock, she can also see the future. She knows how to back up and start at the beginning again if she needs to.”

Lloyd Security offers high-tech residential, commercial, and construction site security systems, including panic rooms, and systems that monitor the sick and elderly so they can age in place. The company designs, installs and monitors the systems.

What was your first experience as a leader?

I was class president at St. Anthony High School for three years. It was socially awkward at times, but it teaches you basic leadership strategies and how to get others to follow the same vision.

What was your hardest lesson in work or life?

Getting the right people in the right seats—accepting when you have the wrong person and having the confidence to let that person go. I did not want the drama of letting someone go, but I learned it is so much more damaging to the company to retain a person who is not working out.

What is your best habit in work or life?

A do-it-now attitude, which also means clearing out email by the end of the day.