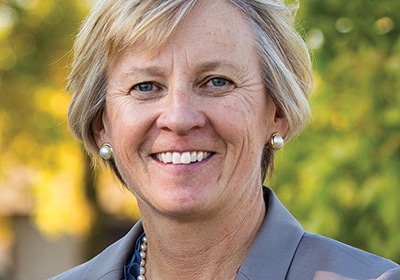 After graduating from St. Olaf College in 1979, Susan Gunderson began her career as a nurse. She quickly developed an interest in organizational leadership and earned her graduate degree in health care administration from the University of Washington in 1983. She became the first administrative fellow at the Mayo Clinic, where she worked for several years. In 1987, she became a health care consultant in Sweden.

In late 1988, former colleagues from Mayo Clinic contacted her and asked her to take the helm at LifeSource.

“At the time there was no centralized organization serving organ donation,” Gunderson explains. “There was a need [to create one] as transplantation became more successful.”

Now, a quarter-century later, Gunderson is being recognized for her tireless work on behalf of organ donors and transplant recipients. Her decision to accept the LifeSource job has defined her health care career.

The Mayo Clinic, University of Minnesota Medical Center, Abbott Northwestern and Hennepin County Medical Center—all recognized leaders in transplantation—worked together to create LifeSource. (It is based in St. Paul, but planning to move into a new building in Minneapolis.) The nonprofit is a coordinator among donors, hospitals, transplant centers and recipients to maximize the benefit of life-saving procedures. It is connected to a nationwide network of similar organizations, but is the only one operating in Minnesota and the Dakotas.

Gunderson hit the ground running, and LifeSource was fully operational within the first year. As transplant procedures became more common, the organization’s mission evolved. Ten years after its inception, LifeSource added tissue donation (including skin, ligaments, bone, and heart valves) to its offerings, vastly increasing the number of people the organization is able to help.

Gunderson says that for each donation there are about 18 to 36 hours of medical coordination, from first responders and hospital staff to hospital liaisons and donor families. LifeSource has more than 270 hospitals in its network, which includes eight transplant centers (four in Minnesota, two each in North Dakota and South Dakota.) She credits her staff’s ability to work under pressing time constraints and in intensely emotional situations.

“We’ve really been focused on developing a workforce that’s engaged. People who work for LifeSource know why they are there,” Gunderson says. “Some people are available 24 hours a day, seven days a week, 365 days a year.”

The staff members come with a wide range of professional experience, each tailored to a specific need in the organ and tissue donation process, from critical-care nurses to a former police chaplain, whether they deal directly with organs or with providing the family emotional support. In the case of Christopher Spears (see “How It Helps”), LifeSource staff sat down with the Spears family and asked if they had any last wishes. Hospital coordinator Sue Weese personally drove a plaster print of Christopher’s hand to the visitation. The Spears family continues to be involved with LifeSource through donor family support groups as well as memorial and education initiatives.

In Minnesota alone there are nearly 4,000 patients waiting for an organ transplant that could save their lives. For some, the only alternative is costly lifelong dependence on dialysis. For others, there is no alternative.

While quality-of-life factors can’t be accurately measured, financial factors can. Gunderson estimates that a kidney transplant (the most common organ transplant) saves a patient $50,000 over their lifetime compared with dialysis. In the past 25 years, more than 7,000 individuals have received kidney transplants thanks to LifeSource, at an estimated savings of over $350 million in Medicare costs for that patient population. Donor families do not have to pay for costs associated with the donation process.

Because of the investment Gunderson made in donation education and promoting the LifeSource program, Minnesota is a top state not only in the number of identified donors, but in donor matches. In 2013, 490 organs were successfully donated, and LifeSource led the country in organs transplanted per donor, an accomplishment in medical management and a testament to the close partnerships Gunderson has forged with transplant centers.

Gunderson applies her experience with LifeSource to several national and international organizations to promote the donor network globally, including Transplant Procurement Management, based in Spain. Closer to home, Gunderson recently was named to a year-long fellowship with the Baldrige Performance Excellence Program, a federal program aimed at enhancing competitiveness, quality and productivity of all businesses in the United States. Though LifeSource is a nonprofit, it strives to continually improve its business model and maximize benefits to patients and families.

In late 2014, it will open its new headquarters, a $13.3 million facility on the banks of the Mississippi River in Minneapolis. Besides accommodating a continually growing staff, the new location will offer meeting spaces and a healing garden, which provides space for volunteers and donor families to gather.

When Christopher Spears got his driver’s license at 16, he checked the donor box. “I asked him, ‘Do you know what that is?’ ” his mother, Luann, recalls. “He said, ‘Of course, Mom.’ He helped out people wherever he could; it wasn’t even a question for him.”

Two years later, he was involved in a head-on car crash and declared brain-dead.

His donations of kidneys, corneas, heart valves, liver, and skin tissue helped between 40 and 60 people, his mother says. Beyond being in the hospital room, LifeSource continues to provide healing support for the Spears family and acts as the intermediary between the family and organ recipients. To date, the Spears family has received several letters from people whose lives were saved.

“I just want to point out how grateful we are for LifeSource for their continued involvement in our life,” Luann Spears says.

CEO Susan Gunderson says she leads a dedicated staff who are driven by the goal to save lives. The LifeSource culture supports industry innovation, and Gunderson cites multiple factors that are keys to the organization’s success: