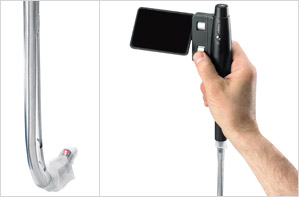 During some surgeries, anesthetists need to place an endotracheal tube in the patient’s airway to hold it open, allowing a patient to breathe and protecting against aspiration and regurgitation. Placing the tube can be done with a bronchoscope, an expensive and delicate instrument, or a laryngoscope, which is essentially a flat strip of metal on a handle.

Or doctors can now use the Clarus Video System, made by Clarus Medical, LLC, an airway and spine product company in Golden Valley, to place endotracheal tubes during many routine surgeries, and to see the airway during tracheotomies and emergency procedures. The system features a high-definition camera and white LED light at the end of a malleable stylet. Doctors watch a four-inch LCD screen to guide the stylet as it’s inserted into the throat. The screen provides a wide-angle view of the larynx (vocal chords) and trachea.

The system allows doctors to quickly and smoothly place the tube, reducing trauma to the patient’s airway. “It’s less traumatic than the standard laryngoscope,” says David Bigg, vice president of sales and marketing for Clarus’ airway division. “The success rate, in experienced hands, will be better.”

The inclusion of the camera was key. “Doctors have asked us over the years, ‘When can you give me a video monitor?’” says Tom Barthel, president of Clarus. Previously, physicians used optical devices in conjunction with or connected to laryngoscopes to see what was happening in the airway. Barthel says the Clarus Video System is easier to use than the older technology because a doctor doesn’t have to have his or her eye “glued” to the device.

“The endotracheal tube is placed over the stylet, and then visualization is used to navigate the airway and place the tube in [the trachea]” while avoiding the esophagus, Bigg says. “If you get food or water into the lungs, you could cause a lot of problems,” he says.

The Clarus Video System is portable, uses rechargeable batteries, and video can be downloaded for later viewing. It’s particularly useful in patients with difficult airways, such as those in collars, that have small mouth openings, or that are paralyzed and not breathing on their own.