Happ’s company Mortgagebot started out primarily as a mortgage lender. Then he saw the promise of focusing on technology.
April 01, 2020 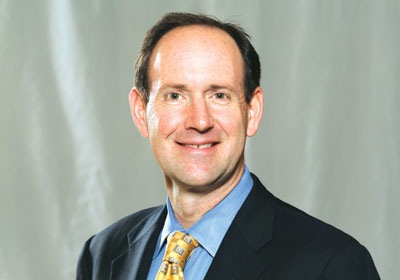 Scott Happ, president and CEO of Mortgagebot in Mequon, a handful of miles north of Milwaukee, has worked in and with banks for his entire career. It’s his fascination with technology, though, that led him to build the banking industry’s top online lending software provider.

“I’m not a software engineer or someone who can explain all the bits and bytes of software, but I’ve always been fascinated by the impact technology can have on all sorts of things, including businesses,” Happ says. “When the Internet arrived, I sensed an opportunity to help consumers get better information about this really complex thing called a mortgage loan and potentially reduce its cost. We would do what a loan officer would do, but on an automated basis.”

Happ joined Wisconsin-based M&I Bank in 1984 and began running its mortgage banking subsidiary 10 years later. Three years after that, “we started incubating some Internet technology designed to help us make mortgage loans over the web,” Happ says. The mortgage banking department turned into a little company; M&I spun it off in 2001, with help from venture capital and private equity backing.

Once its software was ready, Mortgagebot started offering mortgages through an online education, application, and approval process. On October 5, 1998, Happ became its first customer. “I think it was the first loan application that was approved online in the country,” he says.

Other banks got wind of Mortgagebot’s software, liked it, and wanted to license the software, Happ says: “We said, ‘Hey, maybe there’s a business in selling the technology platform we built to other banks and credit unions that also wants to begin doing loans online.’”

There was. Mortgagebot exited the loan business and got into the technology business. It now runs its software platform as a service to subscribing banks and credit unions, working with each customer to configure a branded, individual borrower interface and then running that interface on Mortgagebot’s software. Clients pay a monthly subscription fee and a small additional fee for each completed loan, Happ says.

About a year ago, Canadian financial services firm D&H acquired Mortgagebot, which now employs 110. Happ says that his company’s business model isn’t likely to change. “There’s no reason we can’t get to 2,000 or 3,000 customers,” he says. “If you’re a bank or a credit union and you don’t let your customers go online and do what they would do with a credit officer—and customers kind of expect that today—then you’re a prospect for us.”