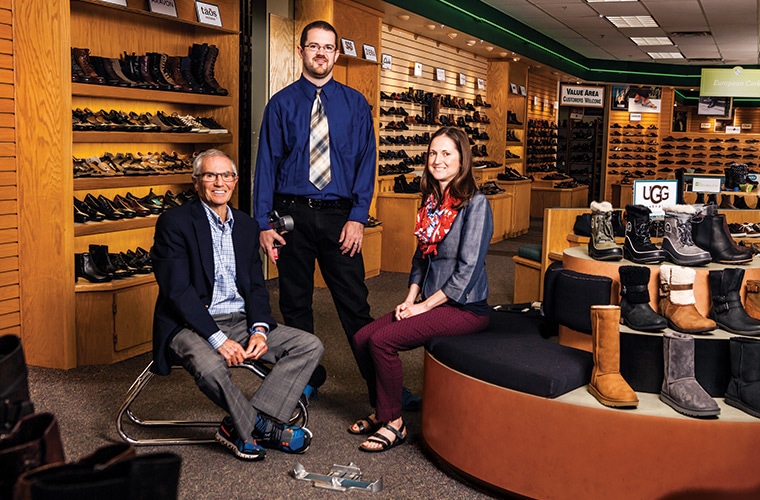 While many Minnesota retailers have been closing their doors, Schuler Shoes has grown its revenue by 33 percent over the last five years.

The family-owned business sells shoes in eight Twin Cities locations and St. Cloud, and it caters to customers looking for comfort and style.

CEO John Schuler, 72, started selling shoes at age 15 in what are called “sit-and-fit” stores, where the sales staff knows how to measure feet and correctly fit a pair of shoes.

“I spent over 45 years on the floor. That’s still my favorite part of the job,” John says, as he sits in his Maple Grove headquarters.

John Schuler is a survivor—in the health and shoe departments. His passion for the shoe business and retailing has not diminished, despite bouts with throat cancer more than a decade ago and a stroke last year.

The small company that he bought from his father in the early 1970s is now a big player that produced $43 million in revenue for the 2016 fiscal year. While John led the business for more than four decades, he turned over some key leadership duties to two of his children this year. Mike Schuler and Marie Vidger, both in their early 30s, assumed the responsibilities of co-presidents.

Today, Schuler Shoes employs 250 people and benefits from a loyal clientele that buys several pairs of shoes a year. But Schuler Shoes was not always a thriving company. Before Mike and Marie were born, John came dangerously close to losing the business.

The lineage of Schuler Shoes goes back to 1889, when John’s great-uncle Vincent came to Minnesota from Austria and opened a shoe store on Broadway in Minneapolis.

Then he learned some painful financial lessons. “My dad had two jobs,” John says, operating the stores and working as a shoe sales representative for the International Shoe Co. in the Upper Midwest.

“He didn’t really care if he made money on the stores, because his income source was as a rep,” John says. Emmet had been bringing in about $750,000 in annual revenue across six stores.

As a new owner, John struggled to service the debts. “I had one heck of a time getting any bank to [lend] me any money,” he says. “I had no net worth. My vendors, they wanted to get paid, and I was on credit hold here and credit hold there.”

The situation was grim. “In 1977, I had been in business for four years and I was basically bankrupt.” John contacted his 77-year-old father, who was spending the winter in Florida. He got on an airplane with his briefcase stuffed with financial statements.

Though it occurred 40 years ago, retelling this story still brings tears to his eyes, and he pauses to compose himself. “I was ready to shut it down. He said, ‘We won’t shut it down.’”

Emmet became a 50-percent stockholder in the enterprise, which relieved debt for John and allowed him to find access to credit.

“It put us in a whole new ballgame,” John says, because it opened the door to operating loans that would help him keep afloat while he built the business. The bank also required more sacrifices. “I had to sell my house to show them that I was willing to do whatever it would take,” he says. “All the money I raised I put in the business.”

John and Nancy Schuler got married in October 1964, and raised two sons and two daughters. In effect, they have two sets of children: Scott and Jennifer are in their early 50s, while Mike is 33 and Marie is 31. All four children work at Schuler Shoes.

When it came time for succession planning, the Schuler family hired JSA Advising in Edina to assess the talents of individual family members and gather feedback. “I thought we needed professional help to make sure this was done properly, to make sure there were no hard feelings,” John says.

Following the assessment, Marie was named president of merchandising and retail and Mike was selected as president of marketing and operations. John’s eldest son, Scott, remains in charge of information technology, while his oldest daughter, Jennifer, and his wife, Nancy, oversee warehouse operations in Brooklyn Park.

John is still CEO, but he has passed the president’s torch to Mike and Marie to take on important responsibilities. For example, John says, “I pulled myself out of the monthly manager meetings where all the store managers come in.” While he is still heavily involved in financial matters, he says, his role has changed in other aspects of the business, including merchandising. “I’m moving from a decision-maker to an advisor, and that’s hard,” he says.

It’s clear that Mike and Marie are leading the business by embracing a core retail recipe that’s yielded much success for Schuler Shoes. Their retail slogan is “Remarkable comfort, surprising style.” Marie says they deliver on that credo by selling shoes from longstanding and proven brands: New Balance, SAS, Clarks, Dansko, Merrell and many others. “It used to be that a comfort footwear option was black and kind of bulky and not very exciting,” Mike says. But comfort shoes have become “more stylish.”

At a recent national shoe show, Marie says some storeowners shared stories about financial struggles and worries about how Amazon may hurt their businesses. “We are growing steadily,” Marie says. “We fill a niche, and people want interaction—they want to try their shoes on.” It doesn’t make sense for Schuler to suddenly shift its business model out of fear, Marie says. “We would just distract ourselves from what we do best.”

Schuler Shoes distinguishes itself by extensive training of its sales associates and offering board certified pedorthists in stores, who meet with customers one-on-one to evaluate their feet for problems ranging from bunions to plantar fasciitis.

“The Schuler customer often comes in first because their feet hurt, but they stay because of the experience,” says Leslie Butler, who worked at Schuler Shoes for 22 years. She retired in 2015 as vice president of merchandising, and ran the company between 2005 and 2007 when John was battling throat cancer.

“They are all about customer service, about offering great selection, sizes and widths,” says Tom O’Brien, an account manager for New Balance. O’Brien has known John Schuler for 20 years and says Schuler frequently donates shoes to low-income neighborhoods in the Twin Cities.

He also says it is part of the ethos of Schuler Shoes to value employees. “John looks at his employees and says, ‘You have been good to me, and I want to be good to you and make sure you can support your family,’ ” O’Brien says.

“I learned how to fit feet through Schuler Shoes by spending time on the sales floor with the people who worked there,” says Sue Winger, a Naot footwear sales manager, who has been in the shoe business for 33 years.

She has sold three brands of shoes to Schuler, and often does trunk shows at the stores to showcase new shoes. Schuler Shoes is “one of the most respected shoe stores in the whole country,” and the business has grown by satisfied customers telling their friends, Winger says.

“John had the foresight years ago to not move to the big shopping malls,” Butler says. “He realized if all his profits went to the landlord he could not invest in his people.”

Butler recalls a humorous anecdote about John’s quest to always do right by the customer. “A consumer wanted a refund on a shoe that she didn’t buy from us,” Butler says. “John instructed me to make her happy. His comment was, ‘She buys her shoes from us, and in her heart she believes she bought those here.’”

1924 – Niece and nephews Marie, Otto and Emmet buy the business.

1968 – Emmet becomes the sole owner following the deaths of Marie and Otto.