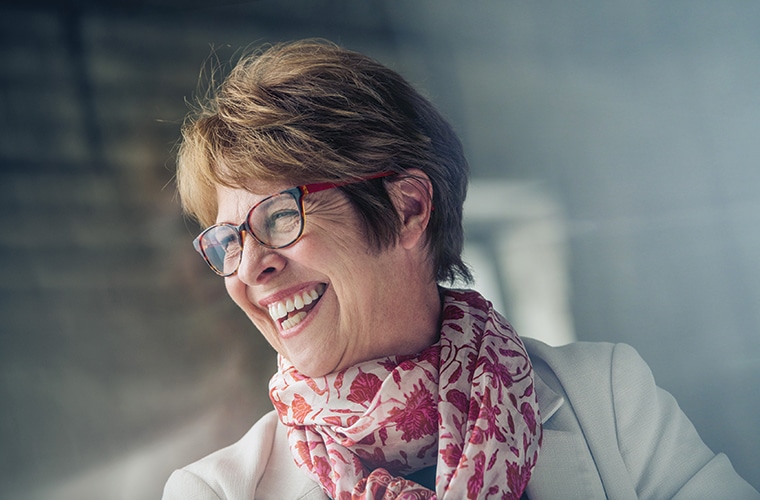 After four decades in PR, the “founding mother” of Weber Shandwick’s values leads its North American offices and remains focused on the heart of communications: the people.
By webpublisherpro
| April 01, 2020
Profile Video

Maureen Bausch was feeling squeamish in 1998 when buddies of David Weinlick wanted to choose a bride for him and stage the wedding at the Mall of America. The MOA’s general manager, Bausch sought guidance from Sara Gavin, the public relations executive who was working on the mall’s account.

Gavin thought it would be fun, so Bausch set aside her fears and gave the green light to the unorthodox mall wedding. “They ended up on the Today Show,” Bausch says. “Sara was always my compass at the Mall of America.”

Gavin’s long association with Bausch illustrates how she approaches her career in public relations. She manages relationships for the long haul.

The names and ownerships of Gavin’s PR employers have changed over the years, but Gavin has been holding fast to a set of professional values. “I don’t think that we can even predict what our business will look like in four or five years,” Gavin says, from her brick-and-glass-walled office in the 510 Marquette building in downtown Minneapolis. “But the core tenets remain—honesty, trust, truth, reputation, purpose.”

Gavin is “an excellent strategist,” Bausch says, but she uses words such as “brilliant, ethical, and kind” to describe why they’ve had a professional relationship since 1990. Their partnership spanned Bausch’s 25-year tenure at MOA, and Gavin’s current firm, Weber Shandwick, helped build the Bold North brand in the run-up to the 2018 Super Bowl. Bausch served as CEO of the Minnesota Super Bowl Host Committee.

Today Gavin is president of Weber Shandwick, North America, which means she oversees strategy and employees in 25 offices.

It’s a big job for someone who says she “was very undirected” when it came to career planning. After graduating from St. Catherine University in 1977 with a bachelor’s degree in history and political science, the young woman who earned a Phi Beta Kappa distinction put her career launch on hold. “I worked for a year so I could go to Europe for six months, which I did with friends,” Gavin says. “We just backpacked around.” The eldest of seven children, Gavin earned the money for travel by working at Lunds grocery store, where she was employed throughout college.

Upon her return, she says, “I was anguished about what was going to happen, what was I going to do.” Her father, Quentin Hietpas, asked her what she enjoyed doing. “I like to write,” she recalls telling him, so she got a communications internship with a state agency, which led to an internship at a PR firm. She says her father did not nudge her into the PR profession, but she describes him as a “lovely storyteller” who led communications for Control Data and Pillsbury.

By the time she was in her early 30s, Gavin says, she began “one of the most formative experiences of my work life.” In 1986, she and business partner Scott Meyer met with Dave Mona and Dennis McGrath to discuss merging their firms. “We went to a lunch, and each side was asked to bring a list of what mattered, what their aspirations were,” she recalled. “When we put those lists together, they were so uncannily alike that we just did it. We didn’t go through tons of legal.”

They formed what ultimately was called Mona, Meyer, McGrath & Gavin, with offices in Bloomington and Minneapolis. The partners wanted to create a PR firm that was a “powerhouse in the Twin Cities,” where employees “could really build a career,” Gavin says. They secured some big clients: Coca-Cola, Mall of America, Northwest Airlines, and Honeywell. “It signaled to us that we could have big, big aspirations.” On Tuesday mornings, the firm’s leadership group would meet for breakfast at Lincoln Del to make plans and solve problems. “I can’t even tell you how many oatmeal orders we consumed while deciding the fate of the world,” Gavin says.

But clients and the industry were paying attention. Shandwick, based in the United Kingdom, acquired the Twin Cities firm in 1988. Now, more than three decades and a few transactions later, Weber Shandwick is the largest PR and communications asset of the New York–based Interpublic Group holding company.

Gavin was promoted to her job of North America president in 2013 after her successful leadership of the Minneapolis office, which had secured a national contract to do work for the 2010 census and has had a 13-year engagement with the U.S. Army.

“The best people come into this field because they want to do work that has impact and creates value,” Gavin says. She explains that Weber Shandwick has an advantage in attracting talent, because its size enables it to land sophisticated client work that can involve staff in multiple offices.

Gavin reports to Gail Heimann, president of global operations at Weber Shandwick. They’ve worked together for more than two decades. Heimann, based at the company’s New York headquarters, says, “Sara is the antithesis of cutthroat, which doesn’t mean that she doesn’t like to win or that she isn’t a great competitor.” Instead, she says, “Sara embodies humanity” and has served as the “founding mother” of Weber Shandwick’s values, which include respect for every employee.

“The world changes every second, and it takes a lot to keep up with it,” Heimann says, but Gavin continually distills information to serve clients within a current context. With Gavin, she says, a client gets someone who is an “exacting strategist” who can analyze and tackle a thorny issue, but she also has the capacity to lead a team to deliver on the strategy.

Chris Hilger, chairman, president, and CEO of Securian Financial, has observed Gavin’s authentic leadership style during her service on Securian’s board. She provides a “great combination of insightful and practical,” he says.

Gavin chairs Securian’s corporate governance and public affairs committee, where Hilger notes she’s advocated for greater diversity within the company. Her efforts, including meetings with prospective board members, are getting results. Three of the 10 independent board directors are women, and 38 percent of the management team are women, Hilger says.

“She is an incredibly passionate advocate for protecting the company’s reputation,” emphasizing the importance of being honest and transparent with employees and customers, he says.

Four decades into a communications career, Gavin says she still loves writing and sifting through facts of client challenges that help her craft the right communication strategies. She’s also seen an evolution in her industry. “We’re now in the business of communicating character, of communicating the purpose of an organization, of helping them engage their employees,” she says.

She’s been playing on a national stage for many years, yet she’s chosen to remain in the Twin Cities, where she and her husband raised four children. “I didn’t really have a master plan,” Gavin says. “I wasn’t propelled by ambition. I liked the work, then I began to love the work.”

1955 – Born in San Antonio, Tex.; moves with her family to Minnesota as a child.
1977 – Graduates Phi Beta Kappa from St. Catherine University with a bachelor’s degree in history and political science.
1981–1983 – Serves as a vice president in the Minneapolis office of Hill and Knowlton.
1983–1986 – Works for a Twin Cities–based firm called Dorn Swenson Meyer, which she and others purchase.
1986 – Sara Gavin and Scott Meyer decide to combine their firm with another agency, creating what would become Mona, Meyer, McGrath & Gavin.
1988 – Mona, Meyer, McGrath & Gavin is acquired by Shandwick but continues to operate under its local name.
1997 – Sara Gavin is president of Shandwick’s Minneapolis office. (In 2001, it becomes Weber Shandwick.)
1998 – Shandwick is sold to Interpublic Group.
2013 – Gavin is appointed president of Weber Shandwick, North America.
2015–2017 – PRWeek names Weber Shandwick U.S. Agency of the Year for three consecutive years.