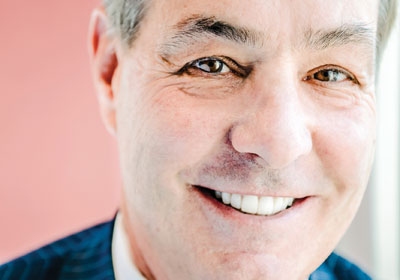 Talk with Ron Peltier about anything of substance and you quickly get an idea of what opposing hockey teams saw when they faced him and his brothers at St. Paul’s Johnson High, and later for the Golden Gophers. Put simply, there’s no finishing in second place for this guy.

Thirty-six years after bailing out of public school teaching to renovate and sell houses, Peltier, 64, holds the reins at HomeServices of America, a generic-sounding but sprawling and rapidly expanding independent residential real estate brokerage poised to make a 25 percent jump in revenue this year, to $50 billion.

If the name HomeServices draws blank looks in idle conversation, local brands under the corporate umbrella, including Edina Realty and Iowa Realty, are as familiar as next-door neighbors to people in their respective areas—which is precisely why Peltier has retained those names as HomeServices, a subsidiary of Warren Buffett’s Berkshire Hathaway, continues its breathless expansion, adding five new brokerages last year alone.

Johnson High has been eclipsed by other schools in today’s hockey pantheon, but it is hard to overvalue the tenacity Peltier displayed on the ice (he was Minnesota’s high school athlete of the year in 1967, when Johnson won the state tournament). That fierce persistence helped forge bonds with legends such as fellow East Sider, former governor Wendell Anderson, and Lou Cotroneo; and, when he played for the Golden Gophers, Herb Brooks (also his coach as a peewee player) and Glen Sonmor. In fact, it was Anderson, then at the peak of his national fame, who counseled young Peltier to switch his career focus from law to business. “He told me if he had it to do over again that’s what he’d do,” says Peltier.

Before he dived into real estate sales, he married his high school sweetheart, Arlie, coached hockey and golf at Blaine High School, and bought a duplex, parlaying renovation skills he picked up working summer construction. “We bought it for $14,000, fixed it up and sold it a year later for $28,000,” he says proudly.

That profit gave him a taste for the residential property game. In fact, while working his day job at Blaine High and going to grad school, Peltier and his wife bought three more properties, which they rented or fixed up and sold, while running a summer hockey camp with his brothers—and a concrete company that, he says, “actually made some pretty good money.”

Point being: Dust never collects on the man.

1974
Receives master’s degree in business from the University of St. Thomas.

1995
With investors, buys Edina Realty back from what is today U.S. Bank after it was sold the previous year.

2008
Appointed chairman of HomeServices of America.

Peltier on the ice in his youth.

He got his real estate license in early 1977 and decided to hitch his star to Edina Realty, then a 200-sales-associate operation run by two other former U of M hockey players. “By June I had booked more earnings in real estate sales than I made in a year of teaching,” he laughs, “so I turned in my resignation.” Eighteen months later he was Edina Realty’s general manager. Eleven years later he was CEO.

In all the years since, Peltier has never changed his license. Wherever Edina Realty has gone, Peltier has gone with it, from rookie sales guy to the corner office.

Edina’s innovative moves in the early ’80 into a full-service realty office offering mortgages as well as closing and title services caught the attention of Wall Street fairly early, especially when it lifted itself into the top five independent real estate companies in the country. Though the double whammy of two crashes in 1987 (April and October), convinced Peltier’s partners it was time to collect their chips and depart, he had plenty of juice for a game that was expanding in scale and complexity. “You only have two choices if you’re running a company,” he says. “You either grow or you die.”

For Edina and Peltier, the growth opportunity was a sale in 1988 to Metropolitan Financial Corporation, a regional financial services company that at that time was still primarily a North Dakota-focused savings and loan. Peltier assumed the title of president and CEO of Edina Realty and with financial backing from the rapidly evolving Metropolitan Financial, led an acquisition strategy into four other Midwestern states. He retained this role when the company was sold again to First Bank (now U.S. Bank) in 1994, although this time Peltier pivoted immediately to buy back the company from the big bank 11 months later, in December 1995. “I’m proud to say the purchase price Metropolitan paid for Edina Realty in 1986 was the same price I paid in 1995,” he adds.

Peltier understood from his experience growing Edina in the ’80s that the future—rich new revenue streams—lay in full-service offerings. What he also saw was the inefficiency attendant in a marketplace of an estimated 70,000 real estate brokerages.

Large investment banks had been circling large commercial real estate brokerages such as Edina; by buying or merging with them, they figured they could directly access the average consumer. But because those brokerages owned few assets and had scant cash value, investment interest waned as Peltier moved. Yet the expansion he envisioned after buying back Edina required capital, and the only way to obtain it was through yet another merger, this time with Mid- American Energy out of Des Moines. Before the ink was dry on that deal, CalEnergy bought MidAmerican, and barely a year after that, Warren Buffett knocked on the door and bought everything.

“When you talk about Ron,” says Steve Murray, president of REAL Trends, an industry consulting, research, and newsletter firm based in suburban Denver, “you are talking about a significant figure in national real estate. He is a very, very respected guy.

“He’s succeeded in multiple endeavors through his career, and he’s been at the cutting edge of the evolution in the industry to bring all the core services under the same roof. I wouldn’t say he invented that system, but no one executed it better than he did.”

Murray and Peltier go back more than 20 years, and in addition to covering Peltier for the newsletter side of his operation, Murray has negotiated against him, as recently as this past March in HomeServices’ acquisition of Prudential Atlanta Realty, that market’s largest.

“I’ve been on all sides of transactions with Ron and what I appreciate is that he is always direct and clear. There is never any confusion about what he wants to get done. We don’t always agree. But if he says, ‘We’ve got a deal,’ I don’t need him to put it in an email to my secretary. His word is enough.”

Murray fully expects Peltier and HomeServices to hit that $50 billion number this year and continue growing—with Peltier at the helm.