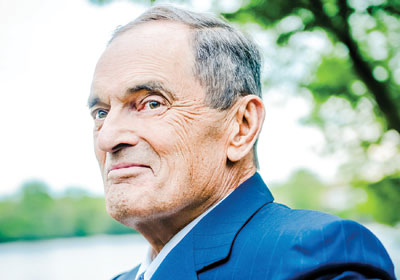 Rod Burwell is considered a “hands-off” business owner by those in his eclectic assortment of companies who know him today. But his start in business was about as hands-on as it gets.

Raised in North Dakota farm country where individual ingenuity was a must, Burwell first succeeded in business by personally hammering, drilling, and cutting an industry-changing product—fiberglass barge covers. This was after an assortment of other hands-on jobs, including running his own janitorial service during college.

The CEO of privately held Burwell Enterprises, the 74-year-old says he has always had a fondness for “tangible stuff”—products he can put his hands on, with one exception: his brief foray into the movie business. “We did a movie with Madonna,” he says with a sly smile. (It was 1985’s Desperately Seeking Susan.)

At his modest office suite in Bloomington, Burwell explains that sometimes an entrepreneur is someone who underestimates the risks of getting something done—the point being that getting your hands dirty and figuring out the flaws in a system (a form of sweat equity) yields pleasing returns.

Over the years, however, he found he could do even better by surrounding himself with leaders who could take over the day-to-day management of his holdings—which have been so vast and varied that even close associates such as Matt Cronin have trouble remembering what was what, and when.

“Rod’s had hotels [the Silvertree in Snowmass outside Aspen, Colorado, and another in Madison, Wisconsin]. He had his underground storage tank business [Xerxes Corp., the country’s largest, now a subsidiary of the Canadian company ZCL]. He’s into laboratories with precision testing [his ownership of Minneapolis-based Pace Analytical]. He’s got a fishing lodge up in Canada, and now he’s into chocolates [last year Burwell and a friend bought into a handful of Fannie May stores],” says Cronin, who is CEO of C&B Operations, a 24-store chain of John Deere dealerships he owns with Burwell. And this list doesn’t include ventures into aquariums, bottled water, airplanes, and satellites—the latter two of which Burwell went into with long-time friend Stanley S. Hubbard. “It’s hard to see a pattern in his businesses, but he has a banker’s mind for where there’s a margin. He sees things other people don’t.

“I’ve known Rod my whole life, and the thing that impresses me the most about him is that, while he is very competitive, there is very little ego. And he’s patient: He operates on the long term with his businesses and doesn’t look at things from quarter to quarter, like a lot of public companies [do],” Cronin says. “Business is simple to him—at least that’s the way it looks from the outside.”

1961
Graduated with business administration and industrial engineering degrees from the University of North Dakota in Grand Forks.

1961-1967
Army Corps of Engineers including stints in Germany, Vietnam, and teaching in the ROTC program at Purdue University (where he also coached the rifle team to the Big 10 Championship).

1969
Started Proform in an abandoned warehouse facility in Minneapolis; sold it in 1984.

1992
Purchased Chippewa Springs, improved operations, and sold it in 1997.

1994
Purchased the fiberglass division of Dart Industries and named it Xerxes, which today controls 65 percent of the fiberglass storage tank market.

1999
Purchased and turned around UnderWater World at Mall of America.

At the Proform Warehouse office in 1969

In 1972—Burwell piloted his own aircraft for many years.

In Japan in 1978 working on a contact to build barge covers.

As the Minneapolis Aquatennial Commodore in 1986.

The Burwells: Blake, Peter, and Michael (standing) and Rod and Barbara.

With his 1961 industrial engineering and business administration degrees from the University of North Dakota, combined with several years serving as a company commander in the U.S. Army, Burwell brings the mind of an industrial engineer and proven leader to entrepreneurship. There’s something about the fundamental laws of nature that apply to products, services, and people, he says.

Understanding those fundamental laws has allowed him to succeed primarily by founding companies from scratch, or purchasing others that had been liquidated and reviving them. Another key to his success: “I’ve never bought a really profitable company, which some of my friends have done, and done quite well with,” he says. “I’m not much of a cash-flow buyer. I like to have assets.”

The classic Burwell story is his first enterprise—well, the one after the college janitorial business he operated; that school-days gig employed five people and netted him $900 a month in the early 1960s, or roughly $6,800 a month in today’s money. Even better was what happened after he received a call from someone he knew at Cargill, who was calling just about everyone he knew for help with a problem. The steel covers on Cargill’s large river barges had a nasty habit of rusting and leaking all over salt and fertilizer shipments. The question was, did Burwell know of anyone who could help?

His answer was no. But then he started tossing around an idea. After a month of struggling to figure how he could create 20-foot by 30-foot molds for pouring resin and fiberglass, he called Cargill back to say he was willing to give it a shot. By the time he finished rummaging through junkyards for resin carts and scrap steel, and after two failed prototypes, he had built fiberglass covers that were lighter and sealed better than traditional steel types. There was only one problem: Burwell’s creations were marginally more expensive than the existing steel covers they were meant to replace.

To offset those higher per-unit costs, he added an arching dome to his design, allowing significantly more salt and fertilizer to be loaded, thereby increasing payloads. This was in 1969, eight years after college and a stint with military engineering in Vietnam. With a grand total of $35,000 cash on hand, Rod Burwell was in business for good with his first significant business, Proform.

Proform did exceptionally well, and Burwell sold it in 1984. From there, he acquired and worked on other ventures before deciding to get back into the fiberglass container business again when he acquired Dart Industries’ struggling fiberglass division and renamed it Xerxes. His new venture eventually went on to surpass industry giant Owens-Corning as the nation’s largest producer of fiberglass underground storage tanks for various fuels, waste, liquids, uranium—even pickles; “There was a huge demand for pickle tanks,” Burwell recalls.

This is when he began to practice his now well-known hands-off approach. “Once I got a business up and running [and creating a profit flow] I hired someone to manage it. After two or three weeks, when my desk was cleared off, since I didn’t have to have my hands on the throttle, I had time to think and strategize about what to do next,” he says. “That’s the way I’ve operated pretty much all along.”

His boldest move over the years may have been one of his more recent: the 1996 acquisition of Pace Analytical Services, an underperforming collection of labs for environmental testing—air, water, soil, and such. Burwell then supervised a streamlining process that dramatically expedited and expanded the volume of work Pace could do. Today, the company is one of the top five labs in the country, testing metals, pharmaceuticals, and medical devices.

At the time Burwell made his move on Pace, the market was glutted with labs. “Everyone and their brother was starting up a lab,” he says. Friends asked him, “ ‘Why do you want to get into something like that?’ And I told them, ‘Because everyone else thinks it’s the worst business in the world, and I like businesses no one else likes.’ I could see there was a business there—environmental testing. But it was all about efficiency and productivity.” And it fit with his penchant for the long view.

“It took a long time to get all the labs set up. But now we can integrate any lab we buy within six months,” Burwell says. “Private equity guys think these labs are easy money. But with permitting, state regulations, and the very specific demands of clients, they quickly find out it’s a lot more complicated than they’ve got the patience for. Me, I’m not bothered by that because we’re in it for the long term.”

Underscoring the success of his “hire right and keep your hands off” management style, Burwell says he rarely if ever has had to parachute back into one his companies to stave off catastrophe. “I avoid that by just walking around the floor, talking to people in the warehouses, in the labs, wherever. You find out pretty fast what isn’t working,” he says. “If you get the right people in place, that’s the best way to manage that I can think of.”