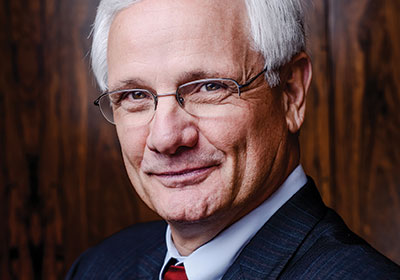 Bob Senkler admits he was surprised when the 2008 financial tsunami hit. “The depth of the financial crisis in ’08, where good assets—assets that I felt from an investment standpoint were good—were being valued at 60 cents on the dollar,” says Senkler, who stepped down from his long tenure as president and CEO of St. Paul-based Securian Financial Group at the end of last year.

Yet he had positioned his insurance and financial services company so that the business wasn’t that surprised. “We modeled our balance sheet so that we knew we’d survive that,” he says, recalling that because of this strategy, “in ’05 and ’06, there was criticism in the industry that we were too conservative.”

He’s heard nothing but praise since: Securian not only survived but thrived, acquiring competitors that weren’t so well prepared. The situation was classic Senkler, who over 20 years navigated the company through several other major changes—including its conversion from Minnesota Life to Securian—while developing what is considered to be one of the best workplace cultures in Minnesota.

While he was at the helm, Senkler doubled the company’s size to $4.2 billion as of 2014. He and his team focused “on things we had been good at for decades,” such as life insurance, and what he calls “accumulation,” a category that includes 401(k), annuities and other retirement income vehicles. They also chose to invest company holdings in less-than-flashy investments: No high-yield, high-risk securities backed by dodgy mortgages, for instance.

Besides avoiding high-risk ventures, Senkler also shed lines that didn’t play to the company’s strengths. Disability income was one of Minnesota Life’s offerings when he joined the company. But with all the legal and verification complications, “it was just very hard for this management team to run that business,” he says. Before he became CEO, Minnesota Life also had added homeowners and auto insurance. “We found that we were very good at marketing,” Senkler says. “We weren’t as good at managing claims.”

Many competitors “were still trying to be good at too many things,” he adds. “From a distribution and technology perspective, we thought we could out-execute and bring more capabilities to the markets.” One of the ways of doing this was to develop digital technology for claims processing and other transactions. Minnesota Life committed to digital technology very early, Senkler says, and was able to acquire companies that were doing half of their transactions on paper. “We were doing 95 percent electronically.”

This gave Minnesota Life greater efficiency in handling claims and thus a stronger competitive position. Case in point: In group life business, where Securian serves numerous Fortune 1000 clients, “we went from the 17th-largest writer in America to the third-largest last year over a 20-year period.” Technology makes it easier for people to enroll. And when a claim needs to be paid, neither employer nor beneficiary want any difficulties, Senkler says.

He’s particularly proud of the $55 billion in benefits Securian has paid out over the last 20 years. It’s a reflection of the company’s financial strength—and its longevity. The oldest client went 88 years before requesting a payment. “We were still there to pay the claim,” Senkler says.

A lifelong St. Paulite and a major hometown booster, Senkler joined Minnesota Life right out of college, attracted by its values—“telling the truth, [and] treat customers and each other with respect,” he says. Senkler climbed the ranks quickly, becoming CEO in 1994 at age 41. His leadership and collaborative approach helped maintain those values.

“During the late ’90s and early 2000s, when we saw a lot of financial services companies getting into trouble, Bob Senkler and Securian were held up as a beacon of integrity—as a company that was doing it the right way,” says Charlie Weaver, executive director of the Minnesota Business Partnership. Weaver has known Senkler for more than 20 years, and the two have worked together on several public policy issues. While some involved insurance, the one Weaver remembers best was Senkler’s leadership in obtaining $7.5 million in state bonding to expand the Ordway Center for the Performing Arts in 2006.

“He was successful, and that wasn’t easy,” Weaver recalls. “He was able to work across the aisle.” Weaver says one of the reasons the Ordway could get the money in a tough bonding year was Senkler’s talent for “getting things done quietly. He’s not someone who needs attention.”

Douglas Baker, chairman and CEO of Ecolab, describes Senkler as “an easygoing guy but also a no-nonsense guy.” Baker, who has worked with Senkler on civic and business-related activities, adds that he brings a “direct, analytical, calm view of how we move forward to almost any project.” What’s more, “when Bob calls, he’s a guy you don’t say no to. You want to work with him on whatever he’s working on.”

Senkler remains Securian’s chairman and will continue his work on civic endeavors. Though he’ll miss aspects of day-to-day company management, one thing he won’t miss was the last big financial crisis. “I don’t want to go through ’08 again,” Senkler says. But even if something like it happens again, he’s positioned Securian to withstand the shock—and even thrive.