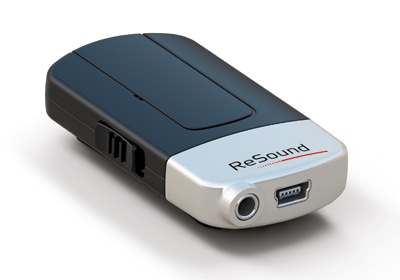 Often, the biggest challenge for hearing aid wearers is trying to hear in a noisy environment. But those using hearing-instrument maker ReSound’s Alera hearing aid with the new Unite Mini Microphone can home in on certain sounds. The microphone is a matchbox-sized device that can be clipped onto a conversation partner in a restaurant, placed near the television in a hotel room, or set on a conference table during meetings. It picks up clear signals and wirelessly sends them to the Alera wearer, who experiences an increase in the desired sound and a decrease in background noise. “It’s the first device to fully capitalize on the promise of wireless technology,” says Kevin Mensink, vice president of marketing at ReSound.

The microphone can send signals from up to 18 feet away on a 2.4 GHz frequency—the same one used by Bluetooth devices—and it uses frequency-hopping to find the strongest signal at any given moment. The device can also stream music from a portable music player; the user plugs it into the microphone and listens through the hearing aid instead of headphones.

Other devices that wirelessly send signals to hearing aids are available, but Mensink says they require the user to wear a streaming device on a lanyard. He says that hearing-impaired people prefer not to draw attention to themselves in this way.

Alera and the Mini Microphone can be used by 95 percent of people with hearing loss, and patient feedback has been positive, Mensink says. “It’s not uncommon to hear them say, ‘That’s the first time I’ve heard my wife clearly in five, six, seven years.’”