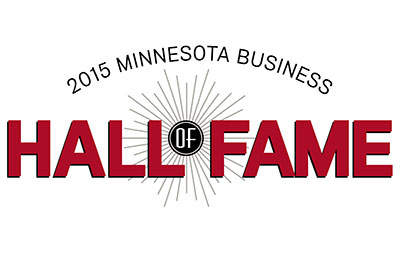 Lynn Casey didn’t join prominent Twin Cities public relations firm Padilla Speer Beardsley expecting to someday lead it. But when the opportunity came in 2001, she took firm hold, leading Padilla through difficult times and making it stronger and more broadly based. The merger she directed with a similarly sized agency in 2013—her firm now is called PadillaCRT—added new markets and capabilities, including brand strategy, website design and content development.

Pat Fallon founded an advertising agency in 1981 with big ambitions and no clients. Three years later, the agency, known today as Fallon Worldwide, won a major industry award and began earning national clients, including the Wall Street Journal, Lee Jeans, BMW and Citibank. He has more than fulfilled his original vision of an agency focused on creative messages backed by deep understanding of the consumer.

Mark Larson took over a small electronics reseller in rural northwestern Minnesota and turned it into a $1.75 billion worldwide distributor of components to designers of electronic device prototypes. Based in Thief River Falls, where most of its 2,600 employees work, Digi-Key picks, packages and sends out 16 million parts annually from more than 650 vendors.

Mark Sheffert is the first person whom numerous troubled companies have called to guide them back to profitability. Minnesota’s premier turnaround expert, Sheffert took his banking and management skills honed at First Bank Systems and founded Manchester Cos., which since 1989 has provided financial restructuring, management consulting and investment banking services, to more than 700 clients. Thanks to his work, he has kept companies operating in Minnesota.

Bill Sweasy represents the third generation of leadership and ownership at Red Wing Shoes. During his tenure, he kept the 110-year-old boot and shoe manufacturer operating and thriving in its small-city hometown of Red Wing. He also acquired a tannery, opened additional stores and expanded its footprint in other countries, where Red Wing’s made-in-the-USA ethos has given its products cachet among younger consumers.

Rod Burwell began as an industrial engineer designing barge covers that replaced the heavier and rust-prone steel tops in use before he introduced his product in 1969. Over time, he branched out into business turnarounds in storage tanks, environmental testing, and leisure and entertainment companies. Through Burwell Enterprises, he has continued to solve challenges in other businesses in areas as diverse as bottled water, aquarium attractions and testing laboratories. Burwell passed away in March 2015 at age 76.

Randall Hogan became CEO of Pentair in 2001, transforming it from a holding company of various businesses to an operating company that has become one of the world’s major suppliers of pumps and valve equipment for the energy industry and water-related products and services. Hogan put together a 2012 deal that merged Pentair with a division of Swiss industrial giant Tyco.

Dave Mona built on his experience as a journalist to create one of Minnesota’s most prominent public relations agencies. Founded in 1983, Mona Meyer McGrath and Gavin became the largest PR firm between Chicago and the West Coast, and one of the chief U.S. agencies in the global Weber Shandwick group. Mona remains a high-profile figure in Minnesota’s philanthropy and sports communities.

Ron Peltier joined Edina Realty in 1977 after obtaining his real estate license, then worked his way up to become its CEO and president in 1992. He bought back the firm from what is today U.S. Bancorp in 1995, then proceeded to build a national real estate brokerage powerhouse called HomeServices of America, acquiring real estate firms throughout the country.

Phil Roberts is one of Minnesota’s most successful restaurateurs. A founder of Parasole Restaurant Holdings, Roberts is renowned for creating “contemporary adult” restaurants that combine informality, stylish but accessible food, and a sometimes edgy marketing sensibility. Parasole’s concepts cover several kinds of cuisine; it also spun off the Buca chain of Italian eateries as a public company.

Bahram Akradi is founder and CEO of Life Time Fitness, one of the largest fitness chains in the country. Starting with its first location in Brooklyn Park, the chain now has 110 national locations, plus one in Canada. The Chanhassen-based company reached $1.2 billion in annual revenue with 22,500 employees.

Richard Davis climbed the ladder from bank teller to president, CEO, and chairman of U.S. Bancorp., one of the nation’s largest regional banking systems, with 3,000 branches in 25 states. Among Davis’ successes as the bank’s leader: avoiding risky investments that tripped up other banks during the recession.

Sally Smith transformed the small restaurant chain Buffalo Wild Wings into a major company that sates a nationwide hankering for chicken wings. In 1996, she took over one of entrepreneur Ken Dahlberg’s investments and became CEO and president, growing the company, now based in Golden Valley, from about 50 locations to more than 1,000.

William Cooper, the straight-shooting CEO of TCF Financial for most of the past 30 years, guided its transition from troubled Twin Cities thrift to a multi-state banking system that had delivered 64 consecutive quarters of profit as of 2011.

Christopher Twomey was CEO of Arctic Cat for nearly a quarter-century. During his tenure, the Thief River Falls-based snowmobile manufacturer enjoyed 22 years of profitability, thriving on a base of intensely loyal customers. In 1990, he took the company public. Five years later, he led Arctic Cat into the ATV business, which accounts for half of its revenue. He returned as temporary CEO in 2011.