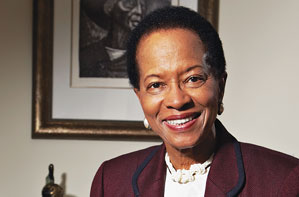 I don’t know any individual or organization that lives or works up to its potential,” Reatha Clark King says. “There is always the question, ‘Are we doing as well as we could be doing if we brought tougher love to the situation?’ I like to nudge organizations in that direction.”

King has been doing just that for three decades. A PhD who started her career as a research chemist, King has added other elements to her career mix, primarily academia (she was president of Metropolitan State University in the Twin Cities) and corporate philanthropy (president and executive director of the General Mills Foundation). Along the way, she has chaired the boards of the American Council on Education, an organization of university presidents, and the American Association for Higher Education, which focuses on faculty development.

“The national higher education boards stand out because those were the frontier years for opening doors of leadership for women and minorities,” King recalls. “There was a wave of social changes happening, and I was a strong advocate for those changes.”

Transitioning from academia in 1988, King worked at General Mills for 14 years, serving as vice president in charge of community outreach programs in what the company now calls the Community Action office. The General Mills Foundation, considered to be a separate organization, is one of those programs. In 2002, King became chair of the foundation’s board of trustees, serving there for a year before retiring at age 65.

“Perhaps my greatest business achievement is the innovative thinking I brought to the work of philanthropy and community service,” King says. “I was able to motivate communities to help them solve their own problems rather than us solving problems for them. It’s not what we did that gained new respect for our foundation but the way we did it.”

King now chairs the board governance committee of the National Association of Corporate Directors (NACD), a Washington, D.C.–based nonprofit organization for corporate board members.

“Reatha is a learner, she’s precise, and she knows how to ask questions and raise points without being confrontational,” says John Stout, an attorney for Minneapolis law firm Fredrikson & Byron and King’s colleague on the local NACD chapter’s board. “She is truly one of our community’s remarkable long-serving directors, and a true student and practitioner of excellent governance.”

“First of all, board work is a service to employees in the work force,” she says. “The employees are the key source of progress, and they are in my mind all the time. The second level of privilege is the quality of life for families that comes from a top-notch board. You never lose sight of the fact that you and your company are holding the public trust to deliver what you promised. On the level of the shareholder, you’re concerned about whether you’re doing your job well enough for them to be profitable in a way they can respect. And then there’s a broader concern about innovation—whether you’re advancing civilization and society as you solve problems.”

King has served on more than 50 nonprofit boards and put in a combined 92 years of service on five public company boards: Wells Fargo (28 years), H. B. Fuller Company (25 years), Minnesota Life Insurance Company (19 years), Exxon Mobil (12 years), and the Lenox Group (8 years). She also has earned 14 honorary doctorates for “achievement against the odds and service that made a difference.”