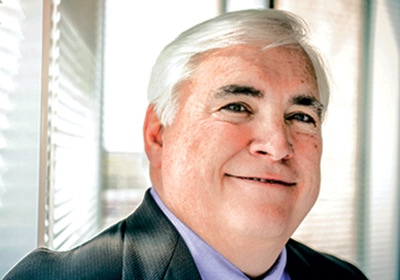 Fifteen years ago, the market cap of Golden Valley-based Pentair, a global provider of water and fluid solutions, was $1 billion. Nine months after its September 2012 merger with Switzerland-based Tyco International’s Flow Control division, Pentair’s market cap was a robust $12.5 billion. Pentair CEO Randall Hogan, 58, who joined the company in 1998, attributes his company’s rise to four simple words: Control your own destiny. “We’ve transformed the company three times in the last 15 years,” he says. “It’s the ability to create your own future that determines winners and losers.”

Hogan’s appetite for reinvention applies to his own career as well. After seven years, he ditched consulting at McKinsey & Company to join General Electric because “in 1988, GE was the place to learn about leadership.” Six years later, he jumped to United Technologies. “There were several points in my career where I made changes because I wanted a different challenge,” he says. “It was a big challenge going from large companies to a smaller company like Pentair to see if I could win the job and do it successfully.”

When Hogan became CEO in 2001, he inherited angry shareholders and a power tools business in crisis. “It was a very charged time to take over the company,” he says. “That was pretty challenging, but it was really exciting too, because even when the shareholders called me a bum, I said, ‘I don’t know if I’m a bum or not, but I know I’m the guy that’s going to fix it.’ ” Eighteen months later, when the problem was fixed, Hogan kept his perspective. “I said, ‘You’re the same guys who called us bums before, so I’m not going to believe I’m a hero, either.’ ”

The Tyco deal was a big win, but Hogan took greater satisfaction in transforming Pentair from a holding company composed of “small hundred-million-dollar” businesses that prized their independence to a decentralized operating company. This time, Hogan’s four-word mantra was “It’s all about culture.” He set about dismantling those fiefdoms in order to build common disciplines throughout the organization. “Fighting for independence was a fool’s argument,” he says. “It was a convenient resistance for someone who didn’t want to play in the big leagues.”