Q & A With Judd Dayton Of The One Percent Club 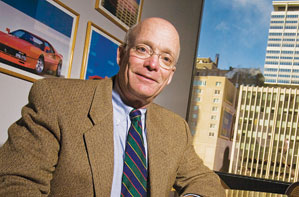 Judson “Judd” Dayton learned firsthand from his family how to give generously, and he takes those philanthropy lessons to heart. He enjoys spreading the message of giving as board chair of the One Percent Club and as a board member and fundraiser for the Science Museum of Minnesota, Groves Academy, and the Nature Conservancy.

How did you get involved with the One Percent Club?

The One Percent Club attracted me because they just encourage people to be philanthropic to causes of their own choosing. It does very little fundraising for itself. I get to the spread the word without having the raise a lot of money.

What is the philosophy of the One Percent Club?

Who is your audience?

We are reaching out to a couple different types of givers, some who have not started their philanthropic adventures and don’t know how to get started or how much to give. We also hope to raise expectations for those who are giving at a minimal level. And for those who are already generous, maybe thinking about net worth instead of income will raise them to substantially higher levels.

How did the One Percent Club get started?

Joe Selvaggio believed that you could raise a lot more money if people thought of giving out of their net worth. He bounced the idea off of a number of people in the Twin Cities, and they suggested getting Ken and Judy Dayton, who are my parents, to help make it work. They were known as generous philanthropists and their involvement could give it the Good Housekeeping stamp of approval.

Joe had a tenacious approach of signing up one person at a time, and he got about 10 people on the board who could each get a few people themselves. He had a goal of getting to 1,000 members. In September 2007 we had a dinner celebrating 10 years of the One Percent Club, and we made Joe the 1,000th member. Over time, members have given more than $100 million to charity.

How has the organization changed over time?

Our new approach is looking at other cities to start One Percent Clubs. We were approached by Trust Point in La Crosse, Wisconsin, where there are a few matriarchs and patriarchs in the community who do everything. They were looking for a way to pass the philanthropic message to future generations. We’ve gone down to La Crosse several times, and they have started the Seven Rivers One Percent Club. We’ve been approached by communities all over, ranging from Hawaii to Florida, that we will consider helping to start One Percent Clubs.