These entrepreneurs and rising stars are blazing a trail of ideation and innovation.
April 01, 2020 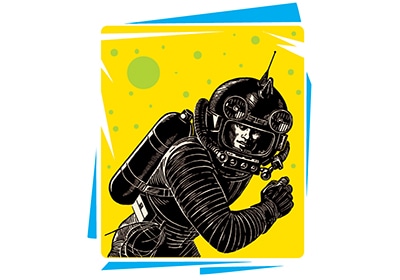 When one assesses the resurrection of Minnesota’s iconic woolen mill, it’s evident that Faribault never forgot how to make great blankets or dropped its small-town work ethic, but the company clearly lost sight of how to design and market a product for the consumer environment. Bruce Bildsten, with a pedigree that goes back to Fallon, understands marketing, retail, niche products and the marketplace in general. His savvy has helped turn Faribault from a manufacturer of commodity goods to a creator of design-centric desirability, at a price point that is anything but commodity.

You may remember her as Colleen Needles, a co-anchor of WCCO-TV news during its journalistic heyday. She came to TV production 20 years ago, and today Tremendous! is far and away the largest producer of national TV programming in the region. Her big strike was partnering with Andrew Zimmern on Bizarre Foods, which brought the company industrywide prominence and opened many doors. Today Tremendous! has five series in national production and employs 35 full-time staff in offices in L.A. and Eden Prairie. Revenue may exceed $25 million in 2015.

Damola Ogundipe—the 26-year-old co-founder and CEO of St. Paul-based start-up Civic Eagle—first attracted attention as a Minnesota Golden Gopher football player who also scored a degree from the Carlson School. Now the Nigerian native is doing it again as one of the very few CEOs of color in the nation’s technology sector. He’s working to capitalize a mobile app and technology platform that combines civic engagement with social media, meant to raise political participation among traditionally hard-to-reach groups such as youth and minorities. Civic Eagle was also a 2015 MN Cup winner.

David Burley and Stephanie Shimp founded Highland Grill in St. Paul in 1993 and have not stopped, building on a vision of a restaurant company rooted in eateries with a distinct sense of place and neighborhood flavor—from the edgy Lowry near Uptown to the dynamic Freehouse in the North Loop to the old-school Groveland Tap in Mac-Groveland. The secret sauce is a sense for what people want to eat, with an emphasis on hospitality and popular pricing. Their businesses cut a different path than the many foodie-movement restaurants currently in vogue. (They also appear to be substantially more profitable.) Burley has been an outspoken proponent of a sub-minimum wage for tipped employees, earning him a fair measure of notoriety within the business.

The Dayton brothers might come from one of the state’s wealthiest families—and with a sitting governor as a father to boot—but they’re determined to make their own mark in the North Loop. Their Bachelor Farmer restaurant, which offers Nordic-inspired cuisine, and the Marvel cocktail bar and Minnesota-themed Askov Finlayson clothing store helped transform the industrial-fringe neighborhood of downtown into the hippest place for the live-work-play set. Next on the list? Getting Minnesota to shed its Midwest label and instead embrace its cold-weather qualities as capital of “North.”

John Colasanti was CEO of Carmichael Lynch before going out on his own in 2011 to start Solve. It’s a much smaller agency, but that’s what Colasanti wanted—an agency with a more direct and personal relationship with clients. And he has made it work: Even with (or maybe because of) its size, Solve has garnered big brands, notably Porsche and True Value, as well as more local ones including Green Giant and Cascadian Farm. In 2013, Solve ranked as one of AdAge’s small agencies of the year in the Midwest. In 2016, look for this lean, multi-function shop to become a little less small.

Julie Snow had never designed a baseball stadium, but CHS Field in downtown St. Paul has drawn rave reviews for its impressive design. That’s no surprise to anyone who’s followed Snow’s distinctively modernist work since she founded Julie Snow Architects in 1995. Other notable projects include the new office space for the Mithun advertising agency, Target Plaza Commons and the Brunsfield North Loop apartments (all in downtown Minneapolis). Snow won the 2014 AIA Minnesota Gold Medal from the state’s chapter of the American Institute of Architects for work that “consistently exemplified the excellence in Minnesota design.”

Kim Bartmann is one of the more prolific and visible of Twin Cities restaurant royalty. Since 1991 she has opened and operated a diverse array of restaurants (Tiny Diner, Barbette, Red Stag) in Minneapolis, the common denominator being her willingness to pioneer in changing neighborhoods and a focus on building and managing with an eye toward environmental sustainability and community stewardship. Bartmann is willing to take a chance when nobody else is, a notable feature in the me-too restaurant game.

Kyle Coolbroth and Don Ball call their collaborative co-working space, CoCo, a “dream accelerator.” The concept behind it? That ideas and innovation flow freely when great minds pursue their passions around fellow creative thinkers. Since opening their first co-working location in St. Paul’s Lowertown in 2010, they’ve expanded to include a flagship office in downtown Minneapolis plus locations in Uptown and Northeast. Their project has stumbled only once—a Fargo outpost closed after just 10 months when it failed to attract enough members. But with its pulse on the Twin Cities start-up scene, expect to hear a lot more—if not about CoCo, then the ideas that emerge from it.

As a longtime technology development manager for defense contractor BAE Systems and later as a senior program manager with RTI Remmele Engineering, Mark McNitt gained deep experience in R&D. Now as the founder of his own company, Stratetek, he’s generating recognition for a new product—a lightweight diesel aircraft engine aimed at the quickly growing market for unmanned aerial vehicles, better known as drones. McNitt’s patented creation came away as the winner of the Carlson School of Management’s 2015 Minnesota Cup in the energy/clean tech/water category.

Marty Weintraub opened this all-purpose digital media and display marketing shop in Duluth in 2006, and he’s a key reason why the Zenith City is on the map as a center of marketing prowess. AimClear—which now also has an office in St. Paul—has ranked on the Inc. 5000 list of the nation’s fastest-growing small companies for four consecutive years, and revenue has grown 240 percent during the past three years, to $7.3 million. Weintraub co-founded the annual Zenith Social Media Marketing Conference, which attracts digital marketing types from all over the region.

Business owner, community leader and event facilitator, Maya Santamaria is building a burgeoning media/event empire focused on the Twin Cities Latino community. The owner of six businesses, Santamaria operates La Raza Radio and Telemundo Minnesota, which brought Latino programming to Comcast in early 2015. She also books the hottest artists from Latin America to perform at her restaurant/nightclub El Nuevo Rodeo. As one of the area’s most prominent Hispanic business owners, a recent cultural advisor to the Ordway and Walker Art Center, and a new Meet Minneapolis director, Santamaria no doubt has more in store for 2016.

Fast-growing retailer Evereve began with a single store in Edina—known as Hot Mama—where the privately held company is still based. Today, the business, renamed Evereve in 2014, has grown to more than 50 stores catering to “fashion-loving moms.” In November it added the latest local outpost at the renovated Ridgedale in Minnetonka. Throughout the company’s history, it’s the vision of founder Megan Tamte that has steered its steady growth. (Tamte’s husband, Mike, is executive chairman.) Evereve entered a new chapter when it sold a minority stake to three investment groups this year, to drive more growth.

Mike Veeck was back in the news this year, basking in the glory of a Saints playoff run and ringing the cash registers at the new CHS Field, which not only gave the Saints franchise new life, but also proved a major boon for downtown St. Paul. It was Veeck’s patience and persistence in pushing for the new ballpark—using his studied folksiness when necessary, keeping quiet when strategic—that set the stage. At 64, the minor-league baseball legend may be mulling an exit strategy from his various holdings, but it’s worth remembering that Veeck not only pioneered the Saints’ very existence, he has secured its long-term future.

It may not sound like an anomaly in the technology industry, but at the ripe age of 32, Mynul Khan has created an empire. He refers to his rapidly growing Minneapolis company, Field Nation, as the Amazon of independent work. By building a digital portal for businesses to link up with project workers, Khan is aiming to make the 9-to-5 workday a thing of the past, and tens of thousands of workers nationwide are utilizing it. Even investors are taking notice, as Philadelphia-based Susquehanna Growth Equity led a $30 million investment to ensure Khan’s business has the fuel to grow.

After leaving a long government relations career at Target in 2010, Garvis has built one of the most creative and influential business development practices in Minnesota. Along with longtime friend and business partner Tom Wiese, Garvis launched Studio/E, which brings together successful executives, government officials, nonprofit staffers and others who seek to start businesses or simply make their own organizations more entrepreneurial and better able to navigate change. Garvis and Wiese also operate Earn Influence Design, a consultancy that helps organizations differentiate themselves and their products or services in a fast-changing world. “[Humans are] biologically wired to resist change,” Garvis says. Think of his work as helping organizations go wireless—and be better connected to customers and the world.

Minnesota certainly is not a black-owned business hotbed: It has only one of the nation’s top 100 such businesses as ranked by revenue. So it’s probably understandable that CEO Ravi Norman has emerged as the go-to guy in the Twin Cities on minority-owned business and workforce-related matters—for instance, keynoting last year’s Midway Chamber of Commerce Economic Development Summit on creating jobs for minorities along the redeveloping Green Line corridor.

Nobody knew much about “eatertainment” before Steve Schussler. The boy-who-never-grew-up designer of nostalgic and fantasy environments has long employed a kid’s sense of wonder to conjure dining and entertainment environments that masses of people want to be a part of. He has more concepts at the Disney theme parks than any of his industry peers—so many that he says he literally has to bowl over Disney’s creatives just to get a hearing. His latest Disney venture is the Boathouse, a nostalgic collection of wooden “dream boats” and waterfront dining. Many of his concepts (Rainforest CafÃ©, T-Rex) eventually end up sold for millions to restaurant operators. Not bad for a kid in a candy store.

Twenty years ago Tracy Singleton opened Birchwood CafÃ© in Minneapolis. Before food was a movement. Before issues of labor ethics and sustainability dominated discussions of what to eat. Before family farms supplied most local restaurants. But those topics were relevant at Birchwood even back then. In the last decade Singleton took on a business partner, hired a chef and ran a Kickstarter campaign to finance a renovation and expansion. Today Birchwood is a Seward neighborhood icon. She has eschewed the growth ambitions of many of her peers, choosing to stay focused on the community of purveyors and customers who made Birchwood what it is.