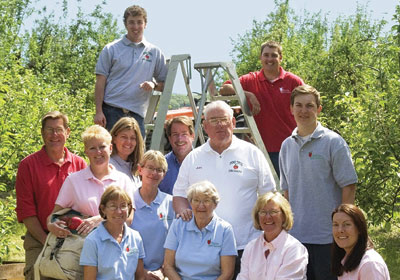 How many Jacobsons does it take to run an apple farm? At Pine Tree Apple Orchard, it now takes eight—not to mention the occasional help from spouses, other family members, and about 100 seasonal employees. But it started with only two.

In 1950, Art Jacobson quit his job at a Hormel meatpacking plant for work at a White Bear Lake apple orchard. Eight years later, he and his wife, Ella Mae—nicknamed “Dickey”—bought the 25-acre farm for roughly $30,000. They soon acquired additional acres from neighboring farmers and bought a second orchard in Preston in order to hedge their bets against the possibility of severe weather.

Though Art passed away three years ago, his hard-working, risk-taking spirit continues to propel the business’s growth—making it the state’s third-largest apple orchard and largest strawberry farm.

Each of the six second-generation siblings owns an equal stake in the business and manages his or her own department. Eldest sister Barb tops the chain of command as general manager. John oversees apple production. Bill does strawberries, which today account for about 10 percent of the business. Mary’s in charge of the bakery, Nancy leads retail apple sales, and Jeanne heads operations at the State Fair and co-manages the bakery operation. (John’s son J. P. is one of two third-generation family members who work for the business; the other is Mary’s daughter Ann.)

The White Bear Lake orchard comprises 300 acres; the Preston orchard, 93. The family grows more than 20 varieties of apples, and roughly 90 percent of revenue is derived from selling produce directly from the White Bear Lake farm to customers. Fruit products—including pies, bread, cider, and candy apples—are another key to the orchard’s success. Dickey, now 84, started the bakery in 1977 and was still pulling a full shift making pie crusts until a year ago.

Bill credits Barb’s financial savvy with allowing the farm to pay off all mortgages and lessen the burden of operating loans, which bog down many operations in the agriculture industry. The family works closely together, day in and day out, and pressing matters are discussed over the lunch table.

In 2007, the farm gained rights to new apple varieties developed by University of Minnesota researchers, including the newest now available, SweeTango. The Jacobsons have been able to sell some SweeTangos, though trees won’t fully mature for several more years. “For a while, demand will outweigh supply,” Barb observes.

The White Bear Lake farm also features a seven-acre corn maze, a pick-your-own-pumpkin patch, and 10-minute guided wagon rides that climb to one of the highest points in Washington County, which overlooks Pine Tree Lake (from which the orchard derives its name). These offerings aren’t large revenue streams, but they increase foot traffic and, in turn, sales.

The orchard supplies seven local school districts with apples—a constant source of revenue that helps level out the annual peaks and valleys in a business dictated by weather variations. “We now have a home for every apple in the bushel,” John says. The distribution channels have virtually eliminated waste, “and in our operation, that’s key.”

Still, the weather “can be a very cruel business partner,” Nancy says. John recalls the October of 2009, when it rained 25 out of 31 days: “We were all sniping at each other, as we were under a fair amount of stress. Toward the end of the month we began to realize, we’re going to have to work extra hard to sell these apples. And we did.”

Of the business’s seasonal employees, most have worked on the farm for at least three years. Harold Jobe, who has driven tractors at the orchard for 15 years, says the Jacobsons are “one of the greatest families in the world to work for.” He points out that the orchard employs many other families; for example, his grandson works on the farm. “And once people work here, they very seldom quit,” Jobe says.

The family has become a cornerstone of the White Bear Lake community, and the crown jewel of its philanthropic efforts is the Pine Tree Apple Tennis Classic, which in August celebrated its 25th anniversary. The mixed doubles tennis tournament raises money for a cancer research program at Children’s Hospitals and Clinics, and to date has brought in more than $3.8 million.

It’s yet to be seen whether the youngest of Art and Dickey’s grandchildren will pursue the family tradition. Even now, Nancy says, it’s hard to begin transferring responsibilities to the younger branches on the family tree. “I can’t imagine retiring,” John says. “I love getting out of bed in the morning and going to work. It’s just the way we were brought up.”