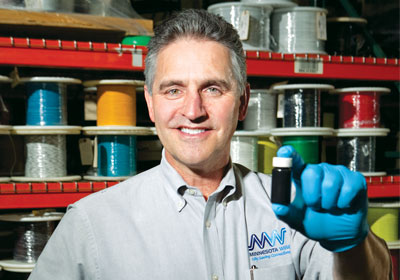 Paul Wagner joined his father’s computer-cable manufacturing business, Minnesota Wire, in 1985. Two weeks into the gig, he informed his dad that he was going to run the family business someday. Paul Wagner followed through on that promise, becoming CEO in 2000 and chairman in 2007.

Along the way, Wagner helped convert Minnesota Wire into a broader-based business. That expansion started just before he joined the company, when projects from Medtronic and other med-tech firms opened the door to the medical industry. Wires for patient-monitoring devices and drug delivery systems remain a core component of the company’s business today. (Computer cables no longer are. Minnesota Wire left that business years ago.)

In 2003, Minnesota Wire “stumbled into the defense industry” when Wagner got a call from a colonel seeking help with an on-soldier army gear program called Land Warrior. “We had all these solutions on the medical side and we flipped them to the defense side,” Wagner recalls. Minnesota Wire replaced outdated wiring with better shielding, ergonomics, and other improvements on the equipment. The company has since designed wiring for military equipment like PDAs, night vision goggles, and headset communication systems, as well as cables for military vehicles and Air Force One.

Last year, Minnesota Wire took on a $6 million cable assembly order that required hiring 125 contract workers and shipping products in a 10-week window for use in military vehicles (MATVs) bound for Afghanistan. That deal played a big role in making 2010 “an absolute historic year in growth, operating income,” Wagner says.

The company has four research and development labs in St. Paul where technicians create products to be manufactured at a 60,000-square-foot facility in Eau Claire, Wisconsin. Minnesota Wire generally employs 200 full-time and 40 contract workers. The medical industry accounts for 60 percent of its business, 30 percent comes from deals for the defense industry, and 10 percent from R&D contracts.

“Paul’s desire to stay ahead of the game has led to lots of different paths of exploration,” says Chip Laingen, Minnesota Wire’s research and development director. “While most of his paths don’t pan out—he would admit he has almost too much going on—the ones that do have helped us be able to compete on innovation, rather than on labor costs.”

Commercialization of products from Minnesota Wire’s R&D programs is priority number one. The company’s iStretch product—an elastomeric (stretchy) wire for use in apparel, robotics, earbuds, and medical applications—is hitting the market. Minnesota Wire also aims to commercialize its iStealth cables, which are 65 percent lighter than traditional cables and constructed from 100 percent pure carbon nanotubes. These cables were originally developed for use in military satellites and unmanned aerial vehicles. Since they contain no metal, iStealth cables don’t heat up or reflect in X-rays, which would make them usable in CT scans and MRIs.

Next in the pipeline are cable connectors in which computer chips have been imbedded. The chips signal when and where there’s a fault in a live wire so that it can be repaired before a break occurs.

Wagner gives much of the credit for his company’s success to the researchers who make such products happen. “One of the key ingredients for the family business was to understand our limitations and hire folks that are smarter than us,” he says. “You hire great people . . .  and get the hell out of their way.”