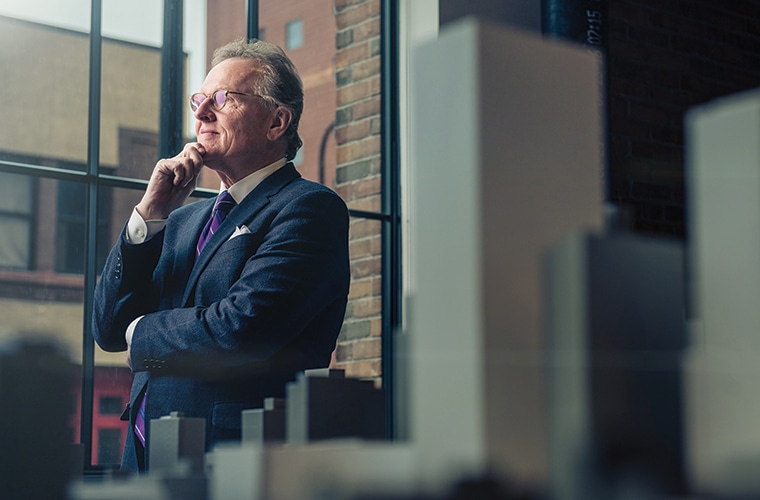 From Midtown Exchange to Downtown East and the Ford site, he steered the family business to new heights.
By webpublisherpro
| April 01, 2020
Profile Video

The Great Recession was not kind to commercial real estate developers. Many were wiped off the map after filing bankruptcy; others were forced to surrender properties to foreclosure. Minneapolis–based builder and developer Ryan Cos. US Inc. survived, but rewired its business model in the process.

“I would say most of what I’ve learned in life, I learned during that period,” says Pat Ryan, former CEO and current chairman of the board for Ryan Cos. “We didn’t have too much speculative development going into the recession. We had too much land.” And as he knew from experience, land expenses are continuous. “Land eats every day.”

Another key lesson, Ryan says: Know where you are in the cycle.

“We were in the midst of the Great Recession. That’s when Pat took over. He was an unshakable leader who had to make some really hard business decisions that involved the livelihoods of many of our team members, with layoffs,” says Brian Murray, who took over as CEO in June 2018—the first non-Ryan to lead the company in its 80-year history. “He also helped to reinvigorate those that were still here. That we were going to make our way out of this and together we were going to land on solid footing.”

Ryan Cos. survived, with its third-party construction business and increased focus on property management and maintenance. At the tail end of the recession, Ryan’s executive team also made some fundamental changes to focus on five property sectors: build-to-suit office, distribution/logistics industrial, retail, health care, and senior housing. Today, the company is meeting its goal of generating at least 70 percent of its revenue from those five product types, Ryan says.

Ryan became CEO in 2009 after his cousin, Jim Ryan, the company’s longtime leader, died of cancer. Even though his grandfather founded the company on the Iron Range in 1938, Pat Ryan originally didn’t work for Ryan Cos. His father specialized in insurance and estate planning; he was not in the construction business. After spending a year as a “ski bum” out of college, Ryan landed a job as a broker leasing office space. That eventually brought him in contact with his cousin Jim, who asked him to join the company in 1983.

“He was a marvelous partner and friend,” says Ryan of his cousin. “And in those two relationships he became a really strong mentor to me. Lesson No. 1 was just ‘Always do the right thing.’ That was kind of his mantra in life. That really drives all of the decisions you make today. No. 2 is ‘Take care of your customer and your customer will take care of you.’ That’s really the foundation upon which we built our mission statement.”

Ryan speaks of construction and development in reverent terms, as if it’s a calling. Projects need to be about more than bricks and mortar.

“Midtown Exchange was significant because it allowed us to look at the positive impact that redevelopment has had in the lives of that whole South Minneapolis neighborhood,” says Ryan of the overhaul of a former Sears store on East Lake Street. “Being community-based really drives so much of what we do today; that is becoming part of our reputation.”

“Without Wells Fargo, it wouldn’t have happened,” Ryan says. Initially, Wells Fargo wanted a suburban location. Ryan refocused the financial institution on downtown. “We just fundamentally felt that was the wrong thing for a major corporate relocation if, in fact, attracting and retaining employees was their No. 1 issue. We had to deliver our thoughts to the right people at Wells Fargo [headquarters] out in San Francisco. And we were fortunate enough to be able to do that.”

In the shadow of the Wells Fargo buildings, Ryan developed the Millwright office building and moved Ryan Cos. headquarters there in 2017.

“This is the best marketing that we can have for the next 20 years if we’re willing to relocate into the largest project we’ve done in Minnesota,” says Ryan of the move to Downtown East.

While it might not get much attention back home, Ryan Cos. has tackled some equally large projects outside the Twin Cities. The Marina Heights project in Tempe, Ariz., totaled 2 million square feet of office space for State Farm. In Austin, Tex., Ryan Cos. developed a project that became the second headquarters for California–based Fortune 500 tech giant Oracle Corp.

Next on the radar? The sprawling Ford site in St. Paul; Ford awarded Ryan Cos. development rights to the 122-acre site in 2018. Big-picture plans call for retail, health care, public spaces, and a wide range of housing options.

“There hasn’t been any significant development over there in decades,” says Ryan of the area around the site, including the Highland Park neighborhood. “You can transform that neighborhood by developing that so that it addresses many needs: affordable housing needs, you need starter homes, you need retirement homes, you need senior housing.”

But at the end of the day, Ryan says, it’s the projects that you never hear about that anchor the company’s business.

“Our bread-and-butter projects are the $10 [million] to $50 million projects,” Ryan says.

“He has an uncanny ability to be able to identify challenges that are out there, risks that other people might not be able to see, and come up with creative solutions to keep a deal on track.”
—Ryan Cos. CEO Brian Murray says of Pat Ryan

“Pat is so incredibly knowledgeable about real estate,” Murray says. “He has an uncanny ability to be able to identify challenges that are out there, risks that other people might not be able to see, and come up with creative solutions to keep a deal on track.”

Even though Ryan is no longer in management meetings, he’s still a fixture at Ryan, and now focuses on two areas: assembling financing and senior housing.

“I promised myself that I’d cut back to 40 hours a week, and it feels like I’m on vacation,” Ryan says with a laugh.

What is he doing with his extra time? “We’ve got a big family,” Ryan says. “We’ve got five kids, all of whom have children. We’ve got 11 grandkids. [I’ll] try to stay present in their lives, spend more time with my wife, Ann, still stay involved in some nonprofits, and then travel more.”

Ultimately, he says that his decision to step down as CEO helps pave the way for the company’s future.

1953 – Born in Hibbing, Minn.
1975 – Graduates from College of St. Thomas with finance degree.
1976 – Joins Coldwell Banker as a commercial real estate broker.
1980 – Earns J.D. from William Mitchell College of Law.
1983 – Joins Ryan Cos. as vice president of development.
1985 – Named president of Ryan Cos.
2007 – Ryan Cos. named national developer of the year by commercial real estate trade group NAIOP.
2009 – Named CEO of Ryan Cos.
2014 – Ryan Cos. acquires five blocks of land from Star Tribune, clearing the way for Downtown East project.
2018 – Steps aside as CEO, becomes chairman of the board.