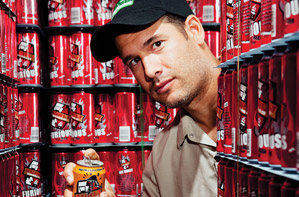 What It Does: Brews craft beers, selling primarily in the Twin Cities.

Surly’s product mix now includes four year-round beers, around 10 seasonal specialties, and occasional one-offs. Production swelled from 1,700 kegs in 2006 to 18,000 kegs—and $3.3 million in revenue—last year. Ansari anticipates brewing 26,000 kegs this year. That would put Surly just 4,000 kegs short of graduating from microbrewery to regional brewer, as those terms are defined in the brewing industry. But size was no issue for BeerAdvocate magazine, which named Surly the “Best Brewery in America” in 2007.

Ansari’s passion for brewing was sparked at the age of 24, when a girlfriend gave him a beer brewing kit. Ten years later, he turned his avocation into his vocation, transforming a fifth of his parents’ 25,000-square-foot industrial abrasives factory into a microbrewery. A couple of years after that, his parents retired when they saw that their son’s business could take over the rest of the facility.

“When I first told my dad about my plans, I was kind of nervous, but he realized I’d be a lot better at running my own dream than running his,” Ansari recalls. Instead, “he shook my hand and said, ‘Welcome to the club. You’re an entrepreneur. You want to do your own thing.’”

Ansari’s creative irreverence, reflected in his company’s name, is one of the chief factors of his success. “Surly is the anger fueled by the inability to find a good beer,” he explains. Ansari and head brewer Todd Haug name every product, shunning standard beer names and going with monikers like Bender, Furious, and Schadenfreude. “Beer is social; it’s a fun thing to make and to sell and to work with,” he says. “The names should reflect that.”

Surly packages its flagship beers in four 16-ounce cans instead of the standard six-pack. “People have given me grief for that; they say it should look like a beer, not an energy drink,” Ansarai says. “Tradition is great, but it can also stifle you and hamper creativity.”

Surly does bottle its small-run specialty beers. There have been six of these special editions so far. To Ansari, a beer’s packaging is as important as its flavor characteristics. For the specialty products, he has commissioned visually bold artwork from Twin Cities artists. “This is a piece of art we’re making, both in the bottle and on the bottle,” Ansari says.