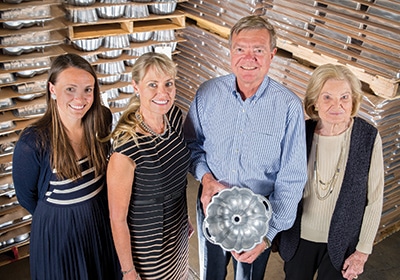 You know the Bundt pan. You might have grown up with one in your family’s kitchen; your family might have one now. You probably knew it was invented in Minnesota, and made here. And you might be surprised to know that it’s still made here, by the same company that invented it: Nordic Ware.

More surprising might be what lies below the company’s landmark concrete tower at the corner of Highways 100 and 25 in St. Louis Park. Tucked away to the southeast of this busy intersection are manufacturing and packaging facilities that produce and ship 350 different products—50 new ones a year. Sales of Bundt pans and its derivatives account for only about of 10 percent of the company’s business. Other products range from small kitchen items to woks, grilling accessories and microwave cookware. And their packaging proudly displays a logo stating their American-made status—a rarity among such product lines today.

Perhaps the biggest surprise of all is where you’ll find these products: Target, Walmart, Williams-Sonoma and just about every independent kitchen supplies store in the United States, including Kitchen Window in Minneapolis.

The Dalquist family, which owns Nordic Ware, was told years ago that it needed to move its manufacturing to China if it were to survive. But “we were committed to making stuff here in America, here in St. Louis Park,” says David Dalquist, Nordic Ware’s CEO, and president and the son of founders Dave and Dorothy Dalquist. “We felt we had a real commitment to this family of employees that had given their lives to this company . . . You can’t just say, ‘I’m sorry, but your job went overseas because it’s cheaper.’ ”

Many of those job holders have been with Nordic Ware 30 years and more; some are second-generation employees. And most have been offered a chance to take on different roles and responsibilities. The Dalquists “gave me a huge opportunity to move up the ladder,” says Joyce Christensen, a 44-year company veteran who is now vice president of planning and distribution. “I’ve done many, many things in those 44 years, from driving a forklift to packer assembly to planning, all the way up. They just gave me that opportunity, with all the things that go with it.”

So how do the Dalquists keep the 350 members of what they consider their extended family busy and happy enough not to leave? “We have to constantly be reinventing ourselves,” David Dalquist says. That means creating new products and responding quickly to customer and market demands. Nordic Ware can repackage products, change colors and handles, and “we’ll do it for very small-run sizes,” says his daughter, Jenny, the company’s sales and marketing director. And if a customer comes in and has a new product idea for a pan, Nordic Ware can have a prototype in their hands in as little as one week, and can move to production in 10 to 12 weeks. A competitor supplying a product made in China could take twice as long, she adds.

To be sure, American consumers “will pay a slight premium for U.S.-made products, but they’re not going to pay a lot [more],” David Dalquist says. Nordic Ware has found that consumers are willing to pay approximately a 10 percent premium for an American-made product versus an import. Stay at that level, and “we have a good chance of getting shelf space with the retailer,” he says. The company’s success, though, lies in its ability to deliver excellent customer service, especially with smaller retailers.

You could say that Nordic Ware has proven to be as durable as its original heavy-cast aluminum Bundt pan and other products made by company founders Dave and Dorothy Dalquist in the late 1940s. At that time, their products were designed to make Nordic delicacies such as ebelskiver (a Danish filled pancake) and krumkake (a crisp Norwegian cookie). The Bundt, whose design origins were actually German, was introduced by Nordic Ware in 1950. But the company’s early trajectory was slow. “We were focused on scratching out sales wherever we could,” David Dalquist says. In 1966, a cake made in a Bundt pan won second prize in the national Pillsbury Bake-Off; sales of the pan suddenly soared. This overnight success 16 years in the making allowed Nordic Ware to pursue new products, bigger retailers and more markets. And an eventual drop in Bundt pan demand forced the company to move on those new ideas quickly. “We now have a brand that’s on all parts of the [consumer] spectrum, from college students to accomplished chefs,” he adds. (Nordic Ware products are now sold in more than 25 countries.)

Dalquist’s father passed away in 2005; his mother still serves on the company board, along with David and his sister Susan Brust, who as vice president of corporate initiatives handles a variety of duties, including special events and copywriting. Two other sisters, Linda Jeffrey and Corrine Lynch, round out the board.

Jenny, the only third-generation member working at Nordic Ware, originally planned a career in medicine. During college, her father encouraged her to get a part-time job at Williams-Sonoma. (“I had an ulterior motive, of course,” David recalls.) She was hooked. She interned at General Mills, then learned merchandising at Target after college. Ulterior motive notwithstanding, her father made it clear that he wouldn’t just let her join the company. “There had to be a position that I was legitimately qualified for,” she says. And her father wanted her to first earn an MBA, which she did while working at Target.

Besides her sales and marketing duties, Jenny works on product development. She’s far from the only one in the company with that role. Every year, Nordic Ware conducts a new-product brainstorming meeting. About 50 people from all over the company participate. They form teams that dream up ideas. The entire group votes for the best idea. Then a smaller group hones those down to marketable possibilities. One of the Bundt line’s newest products—Hidden Surprise inserts, which allows bakers put small treats inside cupcakes—was the inspiration of a company toolmaker.

The company may be one big family, but as David notes, “it’s unrealistic in a family business to think there won’t be conflict.” The Dalquists try to keep on lid on this company-wide by actively discouraging internal politics, instituting an open-door policy that allows anyone to speak with the CEO. But that’s not to say that there hasn’t been disagreement within the family.

“My dad was my best friend—he was my hero,” David recalls. “But we fought like cats and dogs on many things. We debated all the time. What’s the best way to take this pan to market? ‘I think we should go this way.’ ‘No, we gotta go that way.’ ‘You’re nuts! You gotta go that way.’ ” We’d be in the midst of this heated battle,” her brother recalls. “Then all of a sudden I’d look at my watch and I’d say, ‘Oh my gosh! Dad, it’s 4:30. If we don’t get out of here right now, we’re going to miss the last ferry boat to Madeline Island.’ “We might continue the argument in the car, but it was never personal. There was this unconditional love where you could do that.”

Nordic Ware still makes the ebelskiver and krumkake pans that David Dalquist’s parents first produced. The Bundt pan line, meanwhile, has grown to include a gingerbread house, a holiday wreath and more than 50 variations. An early adopter of nonstick coatings for its pans, Nordic Ware became so adept at the application technology that 10 percent of the company’s current business is contract coating for manufacturers of food production equipment and medical devices, among others. Over the years, Nordic Ware shifted to water-based nonstick coatings for its pans, a reflection of the green sensibility that’s one of the Dalquists’ core values.

It’s a value that extends beyond the company’s walls. “Our internal people who are involved in our production processes also live in this community,” Susan Brust says. “So they’re thinking about their own health, and the health of their neighbors and their families. And they’re the ones who decided what goes into our products.”

Another, more strategic value, Jenny Dalquist says, is “remaining nimble. We want to be able to turn on a dime” to meet market and customer demands. But perhaps the Dalquists’ biggest family value is perpetuating what David Dalquist terms “a family business [with] a family atmosphere. It’s one of our strategic advantages.”

1966 – The “Tunnel of Fudge” cake, made with a Bundt, places second in the Pillsbury Bake-Off; Bundt pan sales take off. (Nordic Ware has sold 65 million Bundt pans to date.)

1978 – As part of its expansion into microwave cookery, Nordic Ware introduces the Micro-Go-Round, the original microwave turntable.

2014 – Nordic Ware’s global distribution expands to more than 25 countries; the Bundt pan is featured on the BBC’s “The Great British Bakeoff” program.