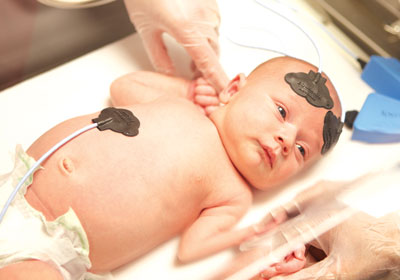 Nonin Medical, Inc., a manufacturer of physiological monitoring devices, invented fingertip pulse oximetry in 1995, which uses light waves—more specifically, near-infrared spectroscopy—to monitor the amount of oxygen in a person’s blood. Building on that technology, Nonin launched its Equanox cerebral/somatic tissue oximetry system in June, which noninvasively and continuously detects oxygen saturation status in brain and other tissues of pediatric patients.

Brian Kane, group product marketing manager of cerebral oximetry at Nonin Medical, says Equanox is used to monitor patients in about 90 percent of pediatric cardiac surgeries and in neonatal intensive care units. The Equanox setup consists of adhesive or non-adhesive pliable foam sensors that are attached to the patient’s forehead, abdomen, or leg; a cable that leads to a small box that runs the proprietary algorithm for each sensor; and a monitor. Without the correct oxygen saturation, kids can go into shock.

Equanox has two light emitters that send an arc of light through tissue and bone to a target area and back to the receivers on the same sensor. “We’re able to send the light down in an arc into the capillary bed of specific tissue and measure the oxygen saturation in that tissue, which is where the oxygen is actually being delivered to the tissue itself,” Kane says. He explains that other companies use age and weight to determine the oxygen saturation of the tissue, but Nonin uses a proprietary algorithm that takes into account not only age and weight, but the physiological state of the patient’s brain tissue, which can differ greatly from child to child, depending on developmental status. Also, because the sensor is measuring a mixture of arterial and venous blood in the capillary bed of a given tissue, the measurement is close to real-time and more accurate.

Doctors used blood pressure monitoring and other vital signs to determine a patient’s status before the advent of cerebral oximetry, but now the measurement of oxygen saturation has become a recognized vital sign in and of itself.