By putting its communities’ needs first, this community bank has entered its second century of family ownership.
April 01, 2020 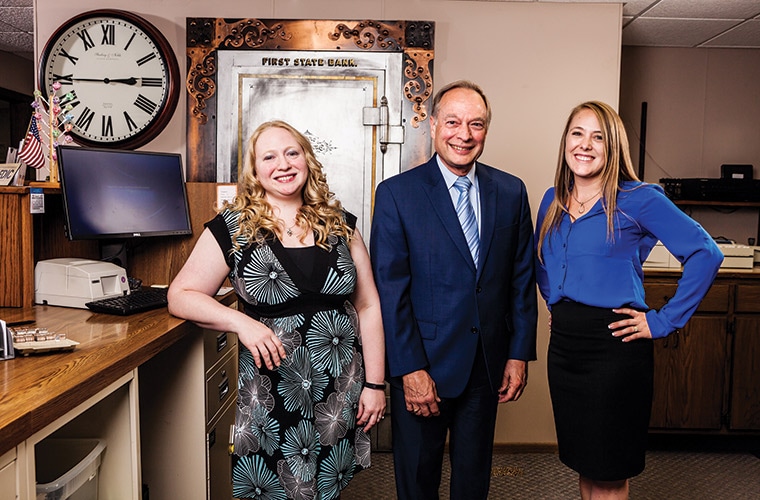 New Market, Minn., is a sleepy place, the proverbial one-horse town. County Highway 2 connects it to sister city Elko, both of which can be driven through in about a minute. It is an unlikely ground zero for one of the more remarkable success stories in the state’s banking industry, a bank that grew from $4 million in assets in 1985 to $105 million today, and one that has thrived by reinventing itself while staying true to the principles that ensured its longevity.

New Market Bank has been run by the Vogel family since 1913, but since the Great Recession and a 2014 leadership transition, it has faced challenges that could have rendered it irrelevant.

“We have thrived by staying focused on our communities (Elko New Market, Lakeville and Prior Lake),” says president Anita Vogel-Drentlaw. “We did development loans and grew with our communities. It’s a great type of business to be in; you can see your impact every day.”

Though New Market is the bank’s longtime home, it has seen its share of growth from expansion to Lakeville and Prior Lake—small exurbs when the bank arrived. (New Market, at 20 years, is the oldest Lakeville bank under continuous ownership.)

It’s not easy for a small business to survive four generations and a century of family ownership. Nor has it been easy for community chartered banks to last in a century that included the Great Depression followed two generations later by vast consolidation, ushering in an era where a small number of national and global banking companies came to control the bulk of deposits.

New Market Bank no longer makes agriculture loans (the town now has more hobby farms than working ones), and auto loans have mostly departed due to direct financing. Today, it makes a lot of small business loans and finances business structures and equipment. Mortgages and home equity play a role, as does personal banking for commercial clients, and there are still some small checking accounts for local account-holders.

Family-owned banks are by their very nature an anachronism in 2017. “To start a bank today requires $10 million in assets,” says Vogel. “Would you start a bank if you had $10 million?” He notes those same strictures make it difficult to sell small banks to employees when family ownership can’t be maintained.

The capital requirements are a legacy of banking regulations that rose from the Great Recession to protect the country from deregulated banks that grew too big to fail, but the restrictions have fallen disproportionately on small banks, says Vogel.

Even keeping the business within the family is not without challenge. When the family began succession planning for Vogel, now 66, it was on the heels of a period of growth that brought assets north of $100 million. It became clear that a simple buyout was not practical.

“I had a background in strategic planning,” Vogel explains. He decided to implement a process taught at the University of St. Thomas Family Business Center. “It’s the European model, not expecting [the next generation] to buy the business from me, but annuitizing me so I can achieve some of my personal goals, rather than burdening the business with debt.”

(Left) Bob’s grandfather Arnold Vogel was put in charge of the bank in 1913.; (Right) The original brick building opened in downtown New Market in 1913.

Since the actual ownership transfer has not been consummated, Vogel maintains a reduced role, handling credit analysis and managing the bank’s investment portfolio. (He was also elected to the state legislature in 2014.) Bob’s father, Bill, 95, remains involved, conducting cash audits for the various branches.

Initially, both of Bob’s daughters were interested in taking over for him. But through a process of skills and goals assessment, the board concluded that daughter Anita Vogel-Drentlaw, a CPA, was best suited for the role. Her sister, Karen Ramola, now manages the Elko New Market branch.

“My passion lies with our family,” Ramola says. “I love banking because it’s the family business, but Anita would be in banking even without the family aspect.” The Vogel family created a family council—essentially a shareholder’s group separate from the board of directors—to deal with issues of ownership and control. “We have a policy process in the family council to deal with conflicts,” explains Vogel-Drentlaw.

In the 1980s, Bob Vogel recruited Audrey Johnson to New Market’s board. She is CEO of Lakeville-based Johnson Cos., a developer of commercial and residential properties. “Bob recruited me for my HR expertise, primarily,” says Johnson.

Johnson was integral in helping the family manage the most recent leadership transition. “I did some mentoring with Anita,” Johnson notes. “She saw the world in black and white, and I helped her understand life is all in the gray areas.”

Though Anita is only 39, the transition was well-timed. “Bob’s election to the Legislature was timely because it gave Anita an opportunity,” Johnson says. “He’s disciplined himself to step back.”

Johnson notes the family is particularly disciplined about finances. “There’s a real commitment to community banking,” she explains. “Anita could make two to three times what she earns if she moved to corporate sector.” Vogel adds that “the key as this business was built was not taking dividends from leftover capital. That allowed us to make it through the recession.”

“They are truly honest, hard-working, service-oriented people,” Johnson adds. Looking ahead, New Market Bank plans to finally replace its century-old headquarters with a new building on Highway 2 (with a drive-through teller) this year or next. But brick and mortar is less a focus than technology. “Increasingly, people never go into a bank,” says Johnson. “The family sees that as a real challenge. They’re not naive to think it’s going to be easy.”

Ramola explains that even the rise of online mortgage banking via phone apps puts small banks at a disadvantage. “Those companies are not regulated as tightly as bank lending,” she notes. Still, anonymity is not every customer’s priority. New Market Bank is a welcome respite for consumers who have found the large national banks challenging to deal with. “Sometimes,” says Vogel-Drentlaw, “the big banks do us favors with how they interact with people. Community banking is relationship banking.”

One timeless truth is that New Market Bank can’t grow like large banks, or through mergers and acquisitions; they must do it organically, slowly and steadily. When generations of the family gather at their northern Minnesota cabin to decompress and reconnect, they don’t talk about which banking company to acquire.

“You can’t do a capital call with family ownership,” Vogel says. “We have to generate internal capital through earnings. It limits the pace that we can grow. But that’s been fine so far.”

While the banking landscape is constantly shifting, it’s clear to the Vogel family that as long as they provide for their bank, it will provide for them. “It’s a stewardship thing,” says Vogel. “If we can keep the business going, it’s the smartest thing any of us could do for ourselves.”

2015 – Bob Vogel sworn into Minnesota House of Representatives (District 20A).