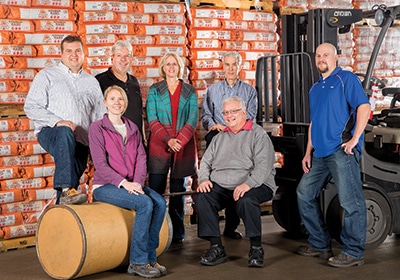 In 1991, the Twin Cities-area bakery where Robert Schafer worked was acquired by a Chicago-based company. The new ownership offered him a promotion to move to Chicago and work there. Schafer declined in order to stay in Minnesota with his family. Instead, he pursued an opportunity to become a supplier to bakeries—part time at first, until his previous employer found a replacement for him.

The early days involved installing a new engine in a used Chevy Astro Van, making dough in the family kitchen, and then taking it to bakeries while it was still fresh, using the now-running van. Demand quickly led Schafer to approach acquaintance Michel Rouache, who was opening a new bakery called National Choice in West St. Paul.

“I had decided I was going to get a warehouse, buy a full truckload of what bakeries needed and then sell it to them—no waiting,” Schafer recalls. Rouache offered free use of his warehouse facility; several months later, Schafer’s business was flourishing enough for him to move his new business, Northern Ingredients, into 1,500 square feet of rental space in St. Anthony.

Rouache became one of Schafer’s largest customers, and when his bakery filed for protection from creditors under Chapter 11, in 2010, Schafer extended him credit so that National Choice could continue to source ingredients and make deliveries of fresh bagels to areas grocery stores.

“Robert is successful because he is a straightforward and honest guy,” Rouache says. “At the end of the day he can make a living, and he lets the other guy make a living as well.” (The bakery that Schafer left in 1991, by the way, is now also a customer.)

Northern Ingredients became the first distributor of nothing but raw ingredients for commercial bakeries in the Twin Cities, Schafer says. While most other distributors were also manufacturers who wanted to sell what they made, “I began selling what the bakeries wanted.”

Now he oversees three food-industry suppliers—Northern Ingredients, Ozaima International and Northwestern Foods. And he’s getting ready to pass the enterprise he founded to the next generation, which is already involved in the business and has some ideas of its own.

Northern Ingredients began, in a sense, as a family business. When Schafer started it, his daughters were 3 and 7, and he and his wife were picking them up and dropping them off at day care and school. “It was first and foremost a business designed to suit the family,” he recalls. Northern Ingredients allowed Schafer to both run a business and accommodate his family duties, as he could work late in the evening or early in the morning.

Those little girls, Claire and Kathryn, are now co-owners of the business with Schafer and his wife Beth. Claire is head of production and procurement; Kathryn lives in Chicago, and is not involved in running the business. Northern Ingredients, meanwhile, has grown into a business employing six family members and managing a 3 million-pound inventory of baking ingredients, which it sells to all sizes of bakeries and food manufacturers, including some local Fortune 500 companies.

Over the years, made-to-order delivery became more common, providing Schafer with a larger niche in the market. His large inventory allows him to deliver items whenever his customers need them—and deliver them fast. It sources raw materials from about 500 vendors, including American Crystal Sugar, Cargill and ConAgra Foods, as well as smaller suppliers. Its 2014 revenue is estimated to hit $40 million, up from $24 million in 2009.

Schafer has carefully managed that growth. He is proud that he hasn’t taken on any debt except for the buildings that he’s purchased. “You do what you can get your arms around, and you do it within your means,” he says. And you partner with other family members and others when acquisition opportunities arise.

Ten years after starting his company, Schafer partnered with his brother-in-law, Kurt Kaiser, and his salesman George Everts to acquire Ozaima International, a distributor of food-production ingredients such as salt, sugar and vinegar to more than 35 suppliers, including Cargill. Four years later, in 2002, Schafer purchased a 35,000-square-foot building in Fridley to accommodate the two businesses. In December 2013, Everts retired and sold his interest in Ozaima to Mike Parks, Schafer’s nephew.

In January 2010, Schafer again partnered with family members to purchase a third company, Northwestern Foods, a St. Paul-based manufacturer and distributor of dry blended food ingredients, primarily cake, cocoa, pizza dough, powdered dry beverages, lecithin and spice mixes. Later that year, Schafer through Northern Ingredients bought a 100,000-square-foot facility in Arden Hills for all three companies. (The three companies are now collectively known as N2O.) In 2014, Northwestern Foods tripled the number of product units it sells, from 4 million to 12 million, due in large part to a partner-style relationship with Plymouth-based food-gift purveyor Maud Borup [Borup is another 2014 Family Business winner.]

“We grow through product line extensions and acquisition,” Schafer says. “We are looking at another complementary business now.” If the purchase goes through, it would provide another 200 customers.

Northern Ingredients acts as the umbrella organization covering facilities, fixed assets and other overhead costs, while additional businesses such as Ozaima and Northwestern Foods order, store and then ship ingredients to customers.

Schafer says that personal wealth isn’t the driving force behind his desire to grow. “I want this business to improve lives,” he says. First and foremost, those lives are N2O’s 28 full-time employees, all of whom eat lunch together every workday, enjoying food prepared by an employee who likes to cook. They also have the option of personal trainer coaching twice a week in the company’s workout room, or bowling in its employee events center. And they’re taken care of the same way Schafer does with family members—if there’s a problem, Schafer wants to not only know about it but see if there’s any way he can help.

In addition, Schafer and his business family help feed patrons of local soup kitchens, and he makes food donations to Catholic Charities and the Salvation Army. “We look at food programs and say, ‘What can we do to help?’ because we are in the food business,” Schafer says.

This caring, down-to-earth company culture is part of what makes N2O praiseworthy to Sara Stern, director of programs for the Schulze School of Entrepreneurship at the University of St. Thomas and director of the university’s Family Business Center. Stern met Schafer when Claire was a student attending a St. Thomas program. “They take care of their people,” Stern says. “Robert answers his own phone. He is right in the trenches with everyone else.”

Schafer spends most of his day in what he calls the bullpen, a group of 10 desks in an open office setting. Company members in the bullpen spend the majority of their day talking to customers and vendors and coordinating deliveries.

Schafer’s daughter Claire is set to eventually run the firm. Also slated for top positions are his nephew Parks, now operations manager, and Bill Huffman, Kurt Kaiser’s son-in-law, who works in customer service and sales. “We are teaching and mentoring, and then learning to be comfortable with how the activity changes,” Schafer says. “And it will change. When it is in someone else’s hands, you have to let go. If you don’t let go, you have conflict.”

When conflict occurs now, whoever argues most passionately about an issue typically wins. His wife, Beth, who had worked as a nurse for 33 years, joined the company on an active basis after retiring from full-time nursing in 2010 to assist with company health, wellness and education programs. A few years ago, she wanted N2O to join the Minnesota Safety Council and use its program for on-site safety training and certification for forklift drivers. Schafer, who has been around forklifts all his adult life, wasn’t as enthusiastic about the idea, but he went along because of Beth’s vigorous assertion. “It’s not hurting,” he says. “But has it prevented an accident? No.”

Schafer has had to adapt to other changes brought about by the up-and-comers. “My daughter [Claire], Mike Parks, and their generation have very different skill sets than [my generation of leadership],” he says. “They have technology skills and much different social skills. Claire doesn’t write a schedule and just hand it to people. She asks them how it will work for them.”

As the second generation continues to develop a business model of consensus management, Schafer will remain in the bullpen and eat lunch with his business family Monday through Friday. At least until he’s ready to completely let go.

1975 – Schafer receives his bachelor’s in accounting from the University of Minnesota.

1981 – Schafer earns a master’s of business administration from the University of St. Thomas.

1991 – Schafer starts Northern Ingredients as a one-man company working out of rented space.

2010 – Company purchases 100,000-square-foot building in Arden Hills and moves all three firms to its new headquarters in January 2011.