For board service to Minnesota Philanthropy Partners.
April 01, 2020 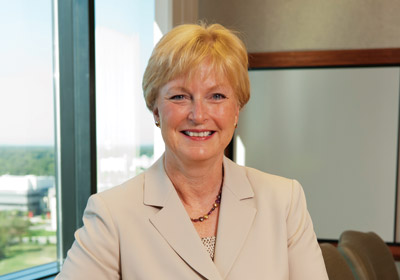 For Mary Brainerd, CEO and president of Bloomington-based insurer and health care provider HealthPartners, serving on boards brings numerous benefits, including many she has returned to her own company. “I learn a lot about effective governance practices, and I bring that back to my own organization’s governance processes and leadership team,” Brainerd says.

Both for-profit and nonprofit board work have been a part of Brainerd’s work life from the beginning. She is one of the founding CEOs of the Itasca Project, a group of 40 government, civic, and business leaders working on numerous economic and social issues, including jobs, education, transportation, and income inequality.

The work is often demanding. Brainerd recalls serving on the board of a firm that had to decide whether another company would acquire it. ‘‘The company had been successful as an independent organization, and many had spent their career efforts in building and growing that business,’’ she says. ‘‘Even though the board and the leadership team could see the value to the acquisition, it was a challenging decision.’’

Other board decisions she has been involved in have required her to confront equally difficult challenges. ‘‘I am an advocate for leadership development and succession planning, which sometimes takes courage,’’ Brainerd says. ‘‘Planning for the future is difficult, and sometimes leaders don’t want to tackle it.’’

Companies that ignore succession planning for too long, she adds, often find that they don’t have time to build strong internal candidates before an existing CEO retires. Pushing for leadership development and succession planning may be unpopular at the time, but is often in the company’s best interests.

For instance, the Sarbanes-Oxley Act of 2002 mandated much more transparent financial controls. Brainerd and other board members considered their financial controls and created new processes, auditing and looking at issues in great detail to make sure financial and operational controls were put in place.

It’s not always easy to call for greater ethics and transparency. ‘‘One of the things I work hard to do as a board member is to ask challenging questions and challenge the conventional thinking, but to do it in a constructive way,’’ Brainerd says. ‘‘It requires a combination of gumption and tact.’’

‘‘Mary is great at being the conscience within the organization, good at remembering the overall goal and filtering out the noise,’’ says Chris Hilger, who serves with Brainerd on the board of Minnesota Philanthropy Partners and is president of Securian Financial Group.

‘‘I’ve had the benefit of seeing Mary in action on both nonprofit and for-profit organizations’ boards, and she’s really willing to do a lot of the heavy lifting,’’ Hilger adds. ‘‘She does not shy away from taking a leadership position within a board structure. She is absolutely one of the thought leaders on the really important conversations and decisions, and she has a lot of credibility with the management and other board members. When she talks, people listen.’’